Win a luxury hamper worth over £100 and a copy of Hey Grandude! 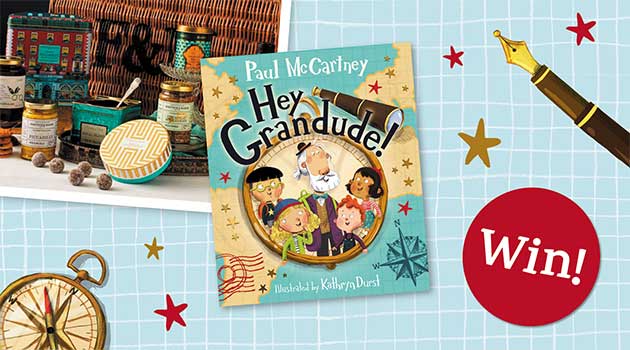 We've teamed up with Puffin Books to celebrate the release of Hey Grandude!, the first children's book written by Paul McCartney and illustrated by Kathryn Durst. One lucky gransnetter will win a copy of the book and a luxury Fortnum & Mason hamper brimming with food and drink and valued at over £100.

Inspired by his own experiences as a grandfather, Hey Grandude! is an action packed book that introduces a magical intrepid explorer grandfather - the eponymous Grandude and his four grandchildren. Join them as they ride flying fish, dodge stampedes and escape avalanches. It's a wild rollercoaster ride with a twist of magic. A heartwarming family story brought to life with funny, colourful illustrations from talented artist, Kathryn Durst.

It's the perfect picture book for parents, grandparents and their little explorers. The audiobook version of the book is narrated by Paul McCartney, accompanied by music composed especially for the soundtrack.

Paul McCartney said: "I've written a new children's picture book. It's called Hey Grandude! Why? Well...I've got eight grandchildren and they're all beautiful and one day one of them said to "Hey Grandude!". I said "What?" and I thought, I kind of like that, so from then on I was kind of known as Grandude."

"So I thought, you know what, that's actually a nice idea for a book. So I started to write some stories and talked to the book publishers and they liked what I was doing."

"It's about a character called Grandude who represents grandfathers everywhere. He has four grandchildren and he calls them 'Chillers'. They love him and they go on adventures with him and he's kind of magical. I wanted to write it for grandparents everywhere - and the kids - so it gives you something to read to the grandkids at bedtime".

Hey Grandude! is published by Puffin and available to buy online and in all good bookshops.

Simply answer the question on the thread HERE by 11am 4 November for the chance to win a Fortnum & Mason hamper and a copy of Hey Grandude!

Finding unexpected things out about friends.