Win a complete set of Santa Montefiore books worth £200 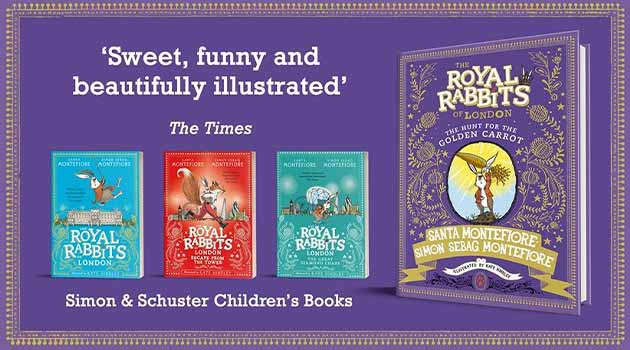 The Hunt for the Golden Carrot is the fourth book in The Royal Rabbits of London series from renowned writers Santa Montefiore and Simon Sebag Montefiore, with beautiful illustrations by Kate Hindley. To celebrate its release, we're giving one lucky gransnetter the incredible opportunity to win a complete set of Santa Montefiore's books - all four children's books and her 20 adult books, together worth £200.

Life is an adventure. Anything in the world is possible – by will and by luck, with a moist carrot, a wet nose and a slice of mad courage! This time, Shylo is off on a new adventure to track down the golden carrot. Springing into madcap thrills and suspenseful mysteries, he’ll need all the help he can get from his friends in the Royal Rabbits and his fellow bucks back home in the country.

The 20th Century Fox animation of The Royal Rabbits of London has been announced as a hybrid-animated live-action feature film, with Will Davies confirmed to write the script. The Royal Rabbits of London was the first children’s book from the Montefiores and was inspired by their son, Sasha, who imagined a society of rabbits living under Buckingham Palace. The book was developed with the advice of their daughter Lily when the children were seven and nine years old, respectively.

The Hunt for the Golden Carrot and the rest of the Royal Rabbits of London series is published by Simon and Schuster and is available to buy online and from all good bookshops.

Simply fill in the form and answer the question below by 11am 21 October for the chance to the complete set of Santa Montefiore's books.

Did you ever buy a Mary Quant dress?

Do you use buses?

Points system for immigrants from next year

Adding a little extra something.