Is anyone out there battling with taking up a new craft in '17?

Personally I'm in a consolidating stage at the moment. I tried to teach myself shuttle tatting last year when a temporary flare-up of arthritis made knitting & cross-stitch almost impossible for a while. YouTube was reasonably helpful - up to the point where left hand was wound up with thread, right hand with shuttle (did she say over or under the thread?) and I need a third hand to pause/backtrack the commentary!
Then I found out about needle tatting

. Much easier to do, producing very similar results to shuttle work and possibly a little quicker. My efforts to date include about 20 butterflies, two circular table centrepieces,an edged hankey and dozens of "snowflakes".

What's everyone else up to?

I'm totally non creative so not much hope for me.

I just looked it up on utube, am more interested now

Hi Kitty
I only have use of a temperamental camera & haven't needed to take photos of my work before. Give me a couple of days to set up & fathom uploading to this site. (Only joined yesterday!!

When I was small I used to sit and watch my sister's mother in law do shuttle tatting; beautiful work. This very patient old lady tried, and failed, to teach me to crochet, and I still can't so I would be hopeless, but I've never heard of needle tatting and would like to see how it is done. 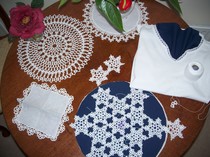 A selection (most) of my work to date.Diameter of top left doily is about 13 ins. The snowflakes are my "go to" project - which is to make a cover for the entire table by next Christmas! DiL's mother is also promised an edged hanky similar to lower left.

Superb! I don't think I'd have the patience. Well done!

Too fine a work for my clumsy fingers and failing eyesight I think . I'll still with crotchet .

But I love your work PoshGran

Lovely. Where do you find time?

PoshGran they are beautiful. I am a sewer and have decided to develop my knowledge of machine heirloom sewing. I love hand sewing as well so that may include a diversion into smocking - I have tried it in the past and am not sure I have the patience for all that gathering

. The only problem is that as this is a minority craft most of the classes seem to be in the USA but there are a couple of online/CD ones that look interesting.

but I have always been interested in the results of tatting and look forward to seeing more of your work.

Those are lovely Poshgran and would be beyond my capabilities. I'm very impressed!

I taught myself tatting from a book, I found that it was a case of getting the tension right so the loop was formed. I have to admit it often landed in the hearth through frustration then my mum would say she would fling it in the fire.

I've had to stop knitting, machine knitting and crochet due to arthritis in my neck so now I make cards and other paper/card crafts. I don't buy a cards now so I can justify the cost of my craft.

They are really beautiful Poshgran, lots of patience I think. I had to re-read your post GracesGran I read the word 'sewer' and thought surely not! The English language.

Love the tatting poshgran so neat and lovely. I am trying to t5each myself to crochet but not getting on very well.

Many thanks all for your kind words.

Izabella - I often tat in the evening, half-watching tv or listening to cd or radio. I also am lucky enough to be a member of a weekly Knit & Natter group which has been going for years & has about 20 members & meets in a village hall 5 minutes away from where I live.

GracesGran - I did some smocking at school: we were allowed to "do something different" in our final year as long as it was based on the various ginghams that we had as our "house" colour.Some people did cross stitch, others embroidery but a few of us smocked. I don't think we actually produced anything of note & seem to remember my final piece of work incorporated a bit of everything (otherwise known as a dog's dinner!), but the gingham fabric was a great starting point for smocking!
Am curious about machine heirloom sewing - more info please....

Pammigran - For me, with shuttle tatting, it was getting the "flip" right (you'll know what I mean). I always admired the cardmaking prowess of one of my group's (see above)members, and I agree with you about justifying costs, whether it's in either actual or personal terms.

Teetime - Stick with it!(says she who has never seriously tried it & only uses a crochet hook to help with & perhaps embellish knitting

Talking of Craft Groups - is anyone else a member of one?

. I think I might nudge them again in the not too distant future.

How old are you?