Anyone know where I can get an old-fashioned one with pegs or has anyone got one they would sell?

Will have to google the question!

I make prodded rugs and have never used a frame. Neither did my mother. Don’t think I’ve ever seen one. How do they work?

I never used a frame for a proddy rug. I am also just finished a latch hook rug - no frame for that either; it you look at
shipleyartgallery.org.uk they have a section on making frames which may be useful

Never seen one of those before. Can see how it would be useful.

My parents never used a frame. They worked sitting at a table. They used to lay the worked part on the table, with the part with the rest of the design outline drawn on it hanging down on their knees. The tool to pierce the hessian and catch the fabric strips (apparently it is called a bodger) was pushed through a quarter/or half-inch fold of hessian closed, opened to catch the end of the strip and pulled back until the ends were even. When a row was finished, the work was moved on a fraction to keep the next line at the edge of the table.

I have seen these bodgers on Ebay and Amazon too. They are like fine-nosed pliers, with one half of the nose longer and pointed to go through the hessian and a spring to keep it closed while you pull through. £20 new or £8 for a rusty vintage one. There must be some in charity shops with no-one aware of what they are. 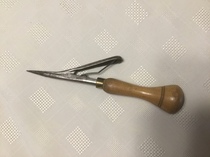 This is the one I have. It is identical to the one my mother used. It cost me six pounds from a flea market.

Thank you all for your comments. I’m glad I don’t need to use a frame. I found some tools on Tynemouth market so I’m all ready to have a go. I’ve seen some of the Shipley Art Gallery stuff. Very helpful and impressive. Thank you al again

I am preparing the bits and pieces to make another one this winter. It’s nice to see them gradually come together. They are a good winter project.

Hi Elegran, that one was sold but I found another pretty similar, that I’m hoping to buy.

I hope you find it useful.

This post brought back memories of making one of these rugs over 50yrs ago after getting engaged. It was white with a green ivy leaf trailing through it. I was so proud of it and had it in our bedroom for many years.

This made me smile -meerkats.

What Inventions would YOU make if you could?