Some lovely pictures of people's work here. Reading through reminds me that I have to finish off a Father Christmas made in June. I bought a book for 50p in WHS, 'The knits before Christmas' by Fiona Goble and I thought I would knit the whole lot before Christmas! I do not think I will now as the eight reindeer look as if they all have spindly legs. I just have to knit a little sack full of very little presents and add a buckle to his belt.

Despite vowing not to, I did knit and sew up a duck this week in front of a good film and a rugby match.

It's been good to hear of people knitting complete Nativity stories! The crocheted animals sound quite quick to do and they look great, but I have never mastered it.

I haven't had any success with knitted animals, but single handed I have made and hidden cats, reindeer and rabbits in the past. however I am managing to knit a series of dinosaurs for my baby GS. I use a long needle to attach the legs, so they are able to move.

I envy (in a nice way) your creativity!

You are all so talented! 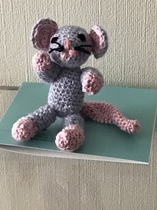 Here is Mouse, finished this afternoon

Again not sure of face, and his tail is a bit thick

I can't crochet toys. I find then far too fiddly. As for the faces, well, like Auntieflo I have trouble with those, making them symmetrical, with a benign expression is beyond me.

🧶. Thank you MamaCaz,
I feel a visit to Ravelry coming on 🧶 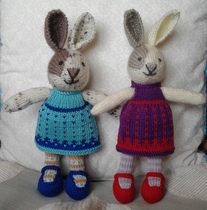 The patterns are by Julie Williams.
You can find her collection here, on Ravelry:

I don't often buy patterns, except charity shop finds, usually using free ones, but I fell in love with these and couldn't resist buying several of Julie's patterns when I had a new dgc on the way.
Some of the patterns are quite fiddly (the cat's head, for example), but I found the patterns very detailed and clear.

So far, I've done the cat, the elephant, a fox and two bunnies.

Those are all lovely ! I knitted teddy bears ,with clothes for 3 granddaughters years ago , had got really enough by then so by the time the 4th wee darling came along I never got hers done
Recently I was visiting and was amazed to see the teddies were still on the go ,even the 12 yrold had hers in the bed , reinforced my guilt , however I made the youngest a crochet blanket , and now have a queue of blankets to do !
One thing , why do they strip the poor bears and lose the clothes ?

Oh MamaCaz, those are beautiful!

Those toys are lovely. I think it's the finishing off and assembly of any project that's the hard bit because if it goes wrong it shows up much more.

I've made a doll from time to time and find stuffing the arms and legs difficult - put too much stuffing in and get a log jam and have to retrieve and start again - much patience required.

The end results are worth the effort and cussing.

MamaCaz, they are just beautiful, and I love their little dresses.
Is the pattern still available?

Those are lovely!
Have just remembered that I once knitted a heffalump for a school fair when dds were little - at least 30 years ago now. He was a boy heffalump with tusks (pipe cleaners inside) and a red jumper. 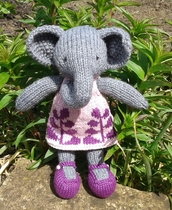 Neither of these had the arms quite how I intended, but they are still very cute, I think.

Sewing on the arms is the worst bit for me. I don't find the legs as bad, probably because they (usually) just need to hang down, whereas the arms have to be angled, and not too high, not too low in relation to the 'neck'.
I like to tell myself that less-than-perfectly-positioned arms gives my knitted animals character

I've never only ever knitted one - the Jean Greenhowe Nativity donkey, but her pattern is mercifully knitted in one piece - except for legs, mane and tail- so amazingly enough it did turn out looking more or less like a donkey, and not some cross between a cow and a piece of conceptual art from the Tate Modern.

I do agree about stuffing and sewing up being a major faff. Recently I've been mad enough to start the Alan Dart knitted Advent calendar - 24 fiddly little things to stuff and sew up. Inc. a robin, a gingerbread man and a polar bear!

No, I haven't, mary51 but, as a knitter who dislikes sewing up, your post made me laugh, especially about the hedgehog! 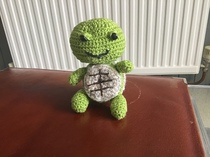 I have just crocheted a Turtle. It's the facial bits that I struggle with.
Next one is to be a Mouse, but the downloaded pattern is not good.

In crochet, I made a smallish teddy bear, my first toy. I then spent a while on Youtube for advice on sewing up and I was pleased with the result. I found that as long as I had a long enough piece of wool trailing from each joint it was easier to sew on. I also pinned the piece I was going to sew just to check it was o.k. before I started. With crochet I ensure I have stuffed the animal enough but not sure about knitted animals but perhaps the basic rules will help.

My GS is monkey mad and I knitted one for him. It was unusual!

Does anyone else have trouble making up knitted animals. In the last few years I have knitted loads, mostly from Knit Your Own Zoo by Muir and Osborne. They are easy enough as the legs are usually in one with the body. Elephants, bears, crocodiles, armadillos, pandas, polar bears etc.

I have just finished a Llama from knitted farm animals by Sarah Keen. About three days to knit up but ages to sew up as I kept putting it off. It's attaching the arms and legs and head so that the poor animal does not look disjointed not that anyone will notice. That take ages.

Every time I do one I resolve never to do another, but
I know I will!!

Another lovely book is Woodland animals by Susie John
full of frogs, snails, badger and a hedgehog which nearly ended in the bin as I thought I had mastered double pointed needles but when it came to sewing up the poor thing looked as if it had been run over.

Just wondered if anyone else found the same!

Wordling around the world 2

Is Liz Truss lying or just ignorant of her own policies?