I need to resurrect my poor pirate! 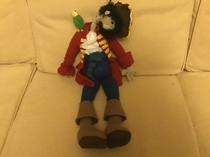 He looks as if he’s been hanged by the neck until dead! Retrieved him yesterday from dd’s house.

I made him last year for Gds, and did think at the time that his neck didn’t seem robust enough for Mr Chuck-and-Bash Gds, still only 3. But he was such a fiddle to make, I can’t just give him a decent burial, even if he was a villain.

Shall have to try a shorter neck, probably reinforced with a few plastic drinking straws, one inside the other, as described by Jean Greenhowe for shepherds’ crooks (nativity set). The pirate pattern said just one, evidently nowhere near enough! (Not for my Gds, anyway.)

Hi, I have made that pirate several times for various grandchildren and have done quite a few running repairs as he always seems to get into fights!! Good luck with your repair, my grandsons are 16 and 17 now and still have their pirates, they have been much loved. I’m sure yours will be too.

Thanks, Nanabanana1. How lovely that your Gdss still have them!
I’ve just beheaded mine altogether, and dug out the pattern. It was the straw that was completely bent. Shall make the neck piece shorter this time, and use 3 straws, 2 of them slit to fit over the other.
Fingers Xed!

Witzend I use pipe cleaners, they are longer lasting so I do not have to do neck repairs very often.

Thanks, BB. I’m now thinking of pipe cleaners inside the straws, double ‘insurance’. I think the pound shop has packs of coloured ones for crafts. Will go on a hunt later since I need to go shopping anyway.

The Postman Pat I knitted for DD many years ago always looked drunk. We couldn't allow him to go off on his delivery rounds, he had to stay on the bed.

My knitted donkey only has three good legs, his fourth is always wonky despite it being stuffed so many times!

It was a long way from Nazareth to Bethlehem and carrying a heavily pregnant woman up and down the mountains would have been tough on a poor little donkey.

I’m just amazed that Chuck-and-Bash Gds hasn’t yet wrecked their Nativity donkey’s legs. Especially given that the first year they had it he was still only 2 and even more of a chucker and basher than now. He thought it was an ‘‘orsey’ then, being very keen on ‘orseys at the time.

Well, if this doesn’t work...
Four lengths of drinking straw, inner one stuffed with 2 lengths of pipe cleaner.
And a shorter neck. 4 rows instead of 7.
Fingers Xed.

Bit late I know but for wobbly legs or neck on a toy you can crochet (or knit) a square or rectangle depending on how wide/narrow your neck or leg is. Use 2 strands of wool worked tightly so that it is quite firm. Roll it up like a cigar, stitch closed then stuff one end into the body and other end into the head then sew round attaching body and head edges to each other. Make the cigar shape long enough to go a good bit down into the body and up into the head. If you catch a few stitches through into the cigar it will stay in place even after being bashed around. This keeps your toy flexible and in shape and is safer than pipe cleaners and softer than straws.

Thank you, @Schnauzer1, I’ll know for next time.

Witzend I saw your easter egg on another post. Done a chick but wondered how to do eggshell. They looked lovely.

Thanks for that Witzend!

What, if anything, do Conservatives now believe in?

Handling parenting styles of our 3 kids