Stash buster sweater - has anyone made one? 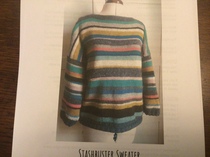 I downloaded this pattern the other day, thinking of making one for Knit For Peace - so much yarn to use up.
Apart from working out a nice sequence of stripes, it looks fairly simple - at least no ‘pick up and knit’ which I avoid like the plague.
I don’t have as many nice tasteful colours as in the pic, but would hope it would look nice anyway.

That looks lovely. Could you give a link to the pattern?

Yes, please, Witzend.. That looks great and I'd love to have a link to the pattern.

It’s a many-page pattern to download, charts for stripe sequence plus blank for your own version, so a bit more ££ than most patterns on there.

It's by Rosee Woodland. Available through Lovecrafts £3.75 and Ravelry £6.00! and also in Feb 2016 edition of KnitToday magazine.

Lots of ends to weave in. Try this Weavin' Stephen (West) method:

Thanks, OP and StatenIsland.