I realise a lot of people feed the birds on here I did years ago, responsibly with sunflower hearts, dish on pole and picking anything left up then stopped as it got expensive. So yes I can see the other side of the coin. My elderly neighbour has been feeding the birds about nine of the ten years we’ve been here. Firstly fat balls, bread which rats used to run with in their mouth now the cheap seed. We have around forty pigeons permanently sitting all day on the roof so the back roof is now a mess, white with poo, feathers and moss. My husband went to have a chat with her as she started feeding at the front of the house and they were sitting on the guttering all day. Poo on everything, she said she doesn’t feed them, we know she does. He explained the damage to structure they cause and that we have rats running all over. A few weeks ago I heard scratching. We have vent covers on we put them on when we moved he at path level. We put traps and caught a mouse in the roof. Re baited and with blocks and well check up their tomorrow. What can we do if she won’t stop. The mess is awful on the roof and yes we’ve let her do it too long but just didn’t want to fall out. Too many pigeons come and a rat was actually at the french door looking in sniffing so I’m concerned. I have depression and health issues so my theory is lift is too short so it’s something hubbie is going to have to deal with. Does anyone suggest a way to talk to her, don’t want to shout fall out but diplomacy isn’t working. Xx

Contact your local council - Environmental Health department and let them deal with it.

Yep, call Environmental Health and ask them how to make a formal complaint. She is attracting vermin. 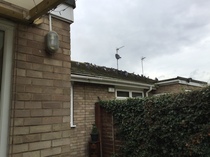 Thanks I thought I would be cast to stone on here, I’m glad for the support. I rang this afternoon. I visited before Xmas for advice at the council offices but she said it’s a civil matter being private dwelling but I rang the officers department and apparently he’ll ring before five days. It’s a health risk, the guttering needs changing but like I’ve said to my hubbie you must wear gloves etc as they carry diseases.

Happy to subsidise our mps food?

MAKING ARRANGEMENTS AND COMING UP WITH IDEAS

Grown up children falling out