Floral displays in France and UK

We enjoy leisurely driving through France on the D roads, avoiding the motorways, seeing all the small towns and villages, before any holiday or visit. This summer we have noted the gorgeousness of all the floral displays that even the quietest places have- roundabouts covered with flowers and sculptures, huge planters, massive baskets of petunias and geraniums. Driving through Auxerre you can see swathes of colour coordinated beds and borders worthy of a stately home. Absolutely gorgeous. Do any French or Francophile grans know whether local councils employ municipal gardeners to tend all this loveliness? What about theses tiny villages? How do they keep these displays watered etc? Thinking about where I inhabit- the local pub has some nice planting but the communal parts of town has little or nothing - there are some planters at the station which people tend to use as rubbish bins. Are there any towns or villages in the U.K. which have lovely displays? I’d love to see them.

Our tiny commune of 70 has a member of the community paid to do odd jobs including creating and looking after the floral displays. The nearest town has a team of municipal gardeners.
I think that the strength of local government in France is the key here - that and the endless competitions.
en.m.wikipedia.org/wiki/Concours_des_villes_et_villages_fleuris 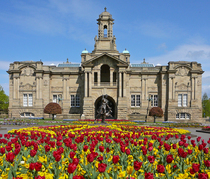 When I lived in Bradford, Cartwright Hall had the most beautiful plantings, plus a flower clock which kept perfect time.

I've just looked online and apparently it still does.

We have beautiful hanging baskets.and planted roundabouts in our small town. I presume done by the Test Valley council.

I do agree French towns and villages are often very pretty, however small.

Yes each commune has a paid employee to do all the smaller local jobs. Grass cutting, repairs, water meter reading and tending floral displays. I think it depends on each village how interested they are. It is noticeable however that there have been reductions in services here as well. Grass verges are not cut as often, promised improvements do not happen.

Our village has some lovely ha nging baskets but I have no idea who pays for them. The village handyman waters them.

We also have a traffic island at the entrance to the village which is kept really well by the village gardening club.

Grass verges being uncut isnt a bad thing unless it impedes vision. Lots of verges round here are planted with wildflowers.

I commented to DH last night how lovely the flower beds and roundabouts were as we drove through Durham, amongst the flowers were Davie lamps in recognition of it being a mining area.

In the UK, many villages, towns and cities enter the annual RHS Britain in Bloom competition. The RHS website probably has a list. The displays are wonderful, a testament to the skills of the local amateurs.

Our small town is a picture and maintained by the parks department. We always win a prize in Britain in Bloom.

In France it is a municipal responsibility and in small towns and villages, the Mairie will speak to a local artisan who will be paid to work on them a few hours a week.

What is the really clever thing in France and I wish British authorities would look and learn, is that these floral planting, often evergreens and shrubs are used as part of traffic calming schemes, The main road through a town, will have a narrow concrete island down the centre of the road, planted up with ornamental everygreens, There will be chicanes at regular intervals down a street, full of plants, roundabouts are planted up., with planting (and rocks) in the corners to stop lorries running up on them and threatening pedestrians.

I know of two long (several miles) downhill roads in to major towns (Granville & Cherbourg), where a wide straight urban major road, has been calmed down and beautified at the same time by such plantings (and in each case the lorries now use the bypass, so they have been discouraged as well)

Our town has lovely planters, big square ones, and the pyramid type, plus hanging baskets, and they look beautiful.
For several years we won Silver awards for the displays. Although not recently, as the town has been undergoing regeneration. But we are getting there! again.

We lived in a village of about 150 people in France. The Maire's office paid a local man to look after the flower arrangements.

Closer to home..for some. The seafront at St Leonard's has some beautiful swathes of plantings...colours worthy of an impressionist painting.

My nearest city was 'banned' from the Britain in Bloom for a while because it kept winning the Gold Award!

They still have lovely displays although the ones along the central reservations aren't as good as they used to be. It must be quite dangerous to tend those ones, with the heavy traffic nowadays.

In the small towns near me I think it's community groups who make up the displays but I believe they can get plants from the council's own suppliers. In my village a children's club does pots and containers and anyone can request one for their street.

Verges are only cut for safety reasons and some have been seeded with wildflowers, which put on a gorgeous display.

Have driven in France many times, the flowers on top of bus stops are lovely, roundabouts and verges always full of colour and love the bridges, both large and small, which always seem to have beautiful flower displays.