Word Games - I do apologise

I know a similar question has been asked before, but I just can’t find it. There seem to be more and more word game appearing on the trending list. I do not have anything against them per se but their increase is knocking other subjects off, sometimes before they have barely started. I suppose it’s too much to ask for a separate list dedicated to games that are trending. As I say I vaguely remember this being raised before but do not recall the outcome

I raised this before op but I don’t think HQ will let us hide entire topics ( like you can on mumsnet ) not sure why?
So you have to hide each thread as it appears - which is what I do.

How do you hide a thread?

If you select ‘Last Day ‘ there currently 113 threads . Surely enough ?

I agree currently there are 113 treads, but I did notice the other day, that a thread popped up and disappeared very swiftly as two word games appeared. I later discovered it had gone to ‘unanswered’. I am just suggesting that a separate list of trending word games would be an advantage for “gamers”and “non gamers” but if I am in a minority that’s fair enough, no offence was intended.

The games threads do rather clog up active threads and I agree that it would make sense to be able to hide a topic but meanwhile you’ll have to hide each thread individually. This is a bit tiresome but once it’s done you just have to hide the new ones as they pop up.
Here’s how.
1. Click on thread to open it.
2. Click on little drop down arrow on the right above the first post
3. Select Hide this thread.

I agree.
I started a thread about this too.
It's especially obvious during the small hours.
I'm awake a lot at that time, and I'd love a bit of a chat then, but I think all of the games threads put people off posting.
I usually pop over to MN instead.
In fact, I've just decided to start a Night Owl thread.
Hope to see lots of posters there. 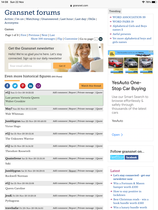 I don't have baubles option with the red arrow - is that the app?
I have Gransnet on my iPad and this is all I get.
Help gratefully accepted, please!
Many thanks!

Sorry Bluebelle yes you can. I'm using an android phone and always hide the games threads from the mobile site.

I don't have that option on a Windows laptop?

Thanks for your help everyone!

Geronimo!
'Last hour' and 'Last day' forum lists, minus 'games', are now manageable to peruse!
Many thanks again for all the welcome advice..

* Ninathenana* you can’t on the iPad 😀

Yes it used to drive me absolutely mad but now I scroll down to bottom of page and switch to mobile site wherit allows you to unfollow them. My saviour.

Oooh thank you everyone!

I've just managed to do all mine and now have a game free screen. Bliss!

The things we do

COVID why do suffers have such different outcomes