I’ll welcome suggestions please for best ways to deter a Fox that visits our garden every night. 🦊 It has started to come soon after dark - several visits - and it sits on our driveway about 8 feet from the front door and barks. We heard it above the TV last night. I am concerned as we have a cat.

Its that time of year when they are looking to mate hence the barking. For the most part cats and foxes keep their distance so your cat will fine. I don't think there is a way to stop it visiting. I have many foxes near me and they can be very noisy but when i had cats there has never been a problem between them.

Before I retired I worked shifts and would be leaving and arriving home at all hours, mostly in the dark. I used to see countless foxes, a family of which used to play on our lawn. Despite being a charming sight this did result in the inevitable fox poo! We are also surrounded by cat lovers and naturally they prefer our garden to their own for toilet purposes.
I tried all manner of deterrents, Jeyes Fluid, narrow sticks in the soil etc etc, all to no effect.
Eventually, I bought a sonic gadget from Amazon. It is adjustable in respect of pitch and animal size but since I've had it we have no fox visit's and only one cat "deposit"!
Great piece of kit, cost me around £20!

There is a product called Scoot to deter foxes. You scatter it round the area it keeps visiting and it should deter it. Make sure there is nothing around for it to eat. I would keep your cat in at night until it has stopped visiting you as foxes do chase after cats. I live in a very rural area and have a neighbour down my lane who likes to feed the foxes, she thinks she is doing the right thing, but she isn’t. They might look beautiful, but they are a pest.

Thank you. We obviously don’t want to harm the fox or our cat so nothing poisonous.
Can humans hear the sonic gadget Polly ?

Hello Puzzler
Same as tanith. We have lots of foxes here. They live in the woods near to our house and come to the bottom of our garden. We've always had cats (and dogs) too and never had a problem in over 20 years.
They look at each other through the fence with a sort of mutual respect and seem to have an understanding!

I feed them too

Hello Fanny. It is a handsome, healthy looking adult Fox 🦊 but I don’t like the smelly poo around the driveway and decking. It follows the same route each night circling our house and into the back garden. We don’t leave any food or rubbish bags out. I wonder why it finds our drive and garden interesting as we are in a residential area of a city?

Hmm. That does seem a bit suspicious. I think that I'd be wary too in your situation. It appears that he's interested in something, and it could well be your cat. If he's pooing aswell it seems that he sees it as his territory.
I hope that someone comes along with the answers!

We will close our catflap as soon as it begins to get dark as it would make me feel reassured that they do not have any face to face contact. She is a pretty little tabby, only a third of the size of the fox.

It probably doesn't have any particular interest in your garden, Puzzler. It will be doing the rounds of its territory every night, and possibly during the day too, checking out all the area and leaving smelly poo as markers to any other fox who thinks he/she could move in. The territory could be quite big if it is a big healthy animal. They have their regular routes which are as clear to them and other foxes as motorways are to us.

They don't often eat cats in spite of people's fears. They are after smaller and easier prey. The shouting is because it is looking for a mate. In May you might see the little results of that mating. They are furry and cute and play like puppies.

Some people say that male human urine is a deterrent. Get MrPuzzler to go out and pee on the drive (after dark)

Thanks Elegran I believe it is mating time for them, and they can bark and even scream! I think I might scream if I see Mr Puzzler peeing outdoors 🤣
It’s intriguing isn’t it, the instincts animals live by?
We’ve lived her for 14 years and it is the first time we have come across this. We only knew we had a resident grey squirrel. Would a fox want to take the territory from a squirrel?

No, the fox would rather eat the squirrel. The territory is only relevant within the species, or with a closely related species. When they meet an individual of another species, animals either eat it, get eaten or ignore it. The squirrel is no threat to the fox but the fox is to the squirrel, so it doesn't hang around when the fox is parolling past.It might sit safely out of reach and swear at it. It doesn't eat the same food as the fox, or compete with the fox for a mate, so the fox isn't concerned about the squirrel's territory. That is the purpose of having a territory - like a farm to a human, it provides food and a home for the family. 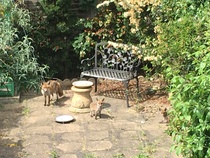 We have urban foxes that visit our garden too Puzzler.

They used to dig a bolt hole in one of our borders and we used to fill it in. Then they would dig it out again and we would fill it in again ...
In the end, we just left it there and paved around it.

We have cats and they are always watchful of the foxes but we’ve had no mishaps. I think cats know to stay clear, when the foxes are about. Ollie (our ex stray) is particularly careful, if there are foxes in the garden.

We don’t feed them, we just ignore them. I do however appreciate they can make an unearthly racket.

We have had cubs visit our garden in spring for the last 4-5 years. Only seen mum once or twice (I assume it's the same mother each year)
We never feed them, they just seem to like our garden which has a field at the bottom and an old storage shed. We believe the lair is under there.
We have a cat. I've seen the cubs and cat just stare at each other from opposite ends of the garden and have also seen the cat chase a cub which disappeared through the hedge

Thank you. We obviously don’t want to harm the fox or our cat so nothing poisonous.
Can humans hear the sonic gadget Polly ?

I can't but my Granddaughters can. We also had some house repairs done recently and one of the men could hear it but his workmates couldn't. Our window cleaner can't hear it either.

Thank you all, I am learning such a lot about something I’ve not really thought about before.
There is an update about our noisy friend. Our next door neighbour is feeding it - we saw a dish outside her front door and asked her. She says it bumps her garage door when it comes.
We are going to find something that goes along our drive boundary with theirs - and hope 🦊 changes it’s route to loop back on itself when it reaches the edge of our drive.
If we try vinegar, It won’t harm it will it?

They are very photogenic animals. If I didn’t have a cat I might be more welcoming to the beautiful creatures.

Vinegar won't harm it, no.

would you OH and sons if you have any of those ... be able to go out an pee on the area where fox comes in, out of sight? That is the official advice. If not, he/they can pee in a jar and sprinkle around area where fox in entering your property.

vinegar can harm the plants though - I use it as weed killer and it works very well.

Wish it were just a fox or badger I could cope with that My problem is Deer. Like all wild life whose habitat is being taken over by humans in the need for redevelopment these poor creatures are looking for somewhere to live knocking down my fenceing in the process.. Any suggestions ?

That’s a bigger problem beverly and sorry I have no advice. I was once driving and saw a stag running across a field towards the hedge and the road. I assumed it would stop, but no, it jumped the hedge and ran across the road just ahead of our car. 🦌

My DD has a fox family living under their shed. They come out at night and sometimes in the daytime. They have tried everything but nothing seems to deter them. This is in London.

Wonderful photo dragonfly and when you see a family like that you can understand why they want a safe place to rear their Cubs.

And what of Oprah herself? What do we know (or think) about her? 🤔

Struggling Caring for my Mum

How is your area getting through the vaccine program after those in age order?

Grown up daughter another forgotten birthday