The height of idiocy 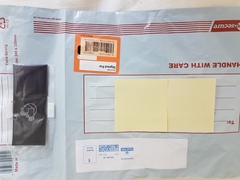 Today @ 11.40 postie knocked with a box (no signature) and a flat, 1st class delivery, plastic envelope which did require a signature.
Box contained Sophie Allport bone china mug in a box inside a second box with loads of paper padding.
Plastic envelope ( 12"×9") was from L'Oreal and contained a pair of thin plastic gloves usually found in boxes of hair colourant, for which I had to sign (see pics)
The story behind this stupidity started 3 weeks ago when I bought a box of highlighter from Lloyds Pharmacy.
A couple of days later I decided to have it done professionally and took box and receipt back to shop.
They opened box and found no gloves, so refused refund.
I had not even opened the box so there can't have been gloves inside in the first place.
Rang Lloyds HO and they thought it was ridiculous, said they'd ring pharmacy, meanwhile they'd get back to me.
They didn't.
Rang L'Oreal and asked for gloves.
Yes...we'll send some.
Meanwhile, Lloyds sent £10 voucher 🙄
I hate compo culture and just wanted gloves so I could take box back.
This morning...2.5 weeks after asking, the gloves arrived.
Pure madness...

I hate the compo culture and said I didn't want it (thank you very much) but would welcome a refund of £7.45 from Lloyds shop.
No... 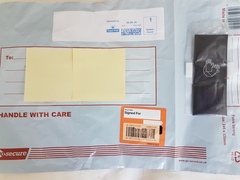 Oh just wondering what colour the hair dye is Gabriella I use shade 7.3 ….. just sayin'

Mind you I noramorally get 2 for £10 at Superdrug.

Ooops I seem to have invented a new word and I rather like it.

Noramorally……. it has a ring to it, don't you think?

I can't think what the shade code is...some sort of coppery bronze anyway.
I was going to use it for flashes but decided to have roots and flashes done at hairdressers. Saves mucking about.

Sorry but I am confused. What has a china mug got to do with a box of hair dye? Or rubber gloves?

The world is mad altogether. I have to sign for catheter night bags.....and the always arrive first thing in the morning.

Noramorally...yes, you could use it in lots of situations. I noramorally would anyway 😉😂

DanniRae
The only correlation is the fact that a pair of worthless plastic gloves was sent in a huge 1st class plastic bag and required a signature, whereas the mug which was infinitely more valuable, didn't.

As my real life name is Nora Morally, I object to you using this Mrs. Malapropism! 😉

The daft thing is (and nothing to do with the need for a signature) that they were under no legal obligation to let you return the highlighter simply because you had decided you no longer needed it. They could have refused, though in this country, larger companies are usually very obliging in this respect.
On the other hand, I think that the lack of gloves in the box would mean that you were legally entitled to a refund, as the product was incomplete.
They seem to have made what should have been a very straightforward sutuation very complicated!

I bought a bag online and when it came it smelled of fish.

They request on the site to let them know if you're not happy, rather than write a bad review (which I would not have done anyway).

I explained the smell, asked what they could suggest.
They offered a 50% refund but I asked them to hold off until Monday because over the weekend I intended to see if there was anything I could do to shift the haddock.

As it turned out, all attempts suggested on line and some already known to me, failed.

So on the Monday I wrote and accepted the offer of the refund, asked if they wanted the bag back and if so a post-paid label would be appreciated.
I also advised them to open and sniff at their otherstock as this smell impacts on their reputation.
Two days later I received 100% refund.

At the moment I can't use the bag.
It's been through the wash (inside a pillowcase!) and has dried with slightly less pong. I've stuffed it with a sachet of pot pourri and am hoping it might be usable one day.

I also sent for some Sinex and other stuff and 4 days later received an e-mail saying the order would be cancelled if I did not pay in 24 hours.

I sent proof I'd paid when it was ordered.
No doubt all this is done by computer as I received no reply.
Nor to my subsequent enquiry when after 3 weeks my Sinex still hadn't arrived from the company based just 6km away.

At the end of the month, a letter from a real person came, asking if I had yet received my goods.
I hadn't.
She said she would look into it and meanwhile would refund my money.
I hadn't asked for or even hinted at this but was nevertheless grateful and said so.

Within hours I received a computer-generated mail "Your order is on its way!" as if announcing the birth of a royal baby.

Two days after that, the total refund popped into my bank account.
I mailed the nice lady and asked what I should do, seeing as I had just been handed the package as well.

She said, 'Keep both, you deserve the compensation.'

Please can we have a block button?

Anyone else having vivid nightmares?

Do you post your photos online? If so, do you edit them to look younger?