What lifted your spirits today?

This view from part of my morning run.
It's so uplifting to see a clear blue sky and the sun casting it's light over hills and houses, dappling all the new growth with fingers of warmth.
Only saw 2 peeps on other side of river who 👋 and I did likewise.
Narrow boats and ducks and exercise and sunshine (albeit weak at that time of day)
Life is good. 😁

Speaking to my granddaughter on the phone (we usually have the children after school 2 days a week and I'm missing them terribly). She was so excited about what she had achieved in the day with her new learning regime. According to my son, she organised it herself and has even done her own timetable! She has learned the French for days of the week, numbers up to one hundred, and common greetings, plus the periodic table, and has started a project on a subject she chose - Egypt. Though she gets good reports from school, I've never seen her so enthusiastic about learning. I am so impressed and hope the novelty of setting her own agenda doesn't wear off! (Her younger brother is less self-motivated and has done the bare minimum today but hopefully he'll eventually get in the swing of things.)

- Watching 2 gold finches on a feeder.
- News from my daughter. She has her third/final interview for an excellent job tomorrow (via Skype).
- Call from my brother - 300 miles away
- Box of wine arrived.

Our street coming out to clap for our carers there were fireworks in the distance too and successfully joining in a Zoom chat with our church home group.

The people in our street all coming out to clap, whoop and and make a joyful noise.
DS said some fireworks were let off where he lives

Lovely sunny day. Successful shop at Sainsbury (just normal weekly shop) and all their staff so lovely and polite, customers queuing patiently in the sun - felt very anxious before going but all OK. The clap for the NHS.

Same here SalsaQueen lots of clapping on our little estate, a few cheers I managed to record a few seconds of it to send to dd (that was after faffing around trying to find the recorder on my phone

hence only captured a few seconds.

The thing that really lifted my spirits today was the "big clap" at 8pm. There were loads of people out on my street, and even a couple of fireworks somewhere. wanted to cry

Sunny weather today always lifts the spirits, also got plants we were waiting for delivered and then planted, and photos of DGC frolicking in their garden sent to us, also chats from a distance with neighbours.😃 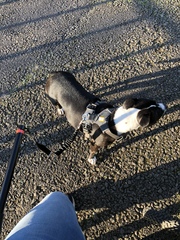 Took my little pooch out for the first time in my bike attachment and she was a star, she loved ir🌟❤️

Once again I was up on the downs with, this time, not one but 2 larks carolling I stood with my eyes shut and listened to the larks and other birds, to sound of the wind in the trees and around me. It was a cold wind and the whole of the right side of my body was cold from the buffetting, In the distance I could hear the lorries on our local dual-carriaged A road. When I opened my eyes there was sunshine and blue skys, trees and hedgerows.

I sat on the beach and watched a butterfly fluttering around, a few moments of joy

Believe it or not the dawn chorus always makes me smile

I spent an hour on FaceTime reading stories to my DGS.

I took my top and socks off to sunbathe

Oh yes, I can see it better now, thank you. It will be lovely! 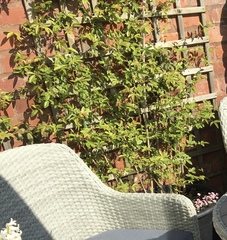 No Callistemon it’s a climbing rose

When I went out for my walk today I heard a lark singing.

Very nice, Lisagran
Is that clematis? It looks quite well advanced

The plum tree is covered in flower buds!
Last year we had three plums, I hope there will be many more this year, as long as the wasps don't get to them before we do. 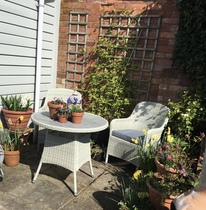 A bit more prosaic - got a letter today from Halifax BS to say our monthly mortgage repayments have been reduced.
By nearly 10% for us. I think it's interest only on a very small amount.
Hoping daughter's are - she has a huge mortgage and is v. worried. I think she's paying off the capital too.

Do you talk to them Ethel?

I used to talk to the dog and I'm sure he used to answer.
I probably got more sense out of him than anyone.
I wish he was still here.

Buttercups! Any more lovers of them?

Has anyone tried to buy premium bonds for grandchildren?

Do you have a special 'talent'?