A little banter, OR the joke's on you.

Would you like to add a joke of your own?
Just a short one so others don't have to wade through lots of pages to add theirs.
I'm not good at remembering punch lines but here goes:
My friend keeps saying " Cheer up mate, you could be stuck underground in a hole full of water". I know he means well. 😁

Someone asked an old man:
"Even after 79 years, you still call your wife – darling, honey, love, sweetheart. What's the secret?"
Old man:
"Oh, no secret -I've forgotten her name and I'm too scared to ask her."

Why the big pause? asks the bartender

The bear shrugs ' Dunno, I was born with them

If I was rich I'd buy an aeroplane

A couple celebrating their 70th wedding anniversary are asked by a journalist: "What's the secret of your long marriage?"
The husband: "When we married, we agreed that I'd make all the big decisions and that my wife would make all the small ones."
Journalist: "How has that worked out?"
Wife: "Very well indeed. There haven't been any big decisions as yet."

An elderly couple go to Church one Sunday. Halfway through the service, the wife leans over and whispers in her husband's ear, "I've just let out a silent fart. What do you think I should do?"
The husband replies "Put a new battery in your hearing aid!"

Great, they're all new to me. I wonder who on earth makes jokes up. They each must start with one person...but we never know who...🤔😂

These have brightened my day! More please!!!!

A woman complained to her husband that he was very immature. He told her to get out of his fort.

They each must start with one person...but we never know who...🤔😂
GreatNan left a wonderful legacy of jokes which she freely admitted she plagiarised from many sources then "copy/paste!" There's 40 pages of them in GN archives! 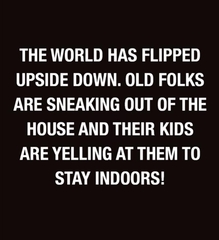 Not sure if this counts as a joke...

Love that NotSpaghetti.
I told this true story to a quite elderly and very tearful friend on the 'phone the other day and she laughed and laughed :

When Marilyn Monroe hadn't been dating Joe DiMaggio for very long, he invited her to meet his parents and took her to lunch in their home. They all got along well and after the meal she went upstairs to use the bathroom which she found was directly above the dining room. Not wanting to broadcast her visit to those below, she turned on the bathroom tap until the flush was pulled. Joe meanwhile asked his parents if they liked her, what did they think? His Father replied that he thought she was charming and very pretty ....and also, that she peed like a horse!

A priest, a minister, and a rabbi had been discussing St Francis of Assisi and how wonderful he was with animals.

Later they got together.
The priest begins: “I read to the bear from the Catechism and sprinkled him with holy water. Next week is his First Communion.”
The Minister says: “I found a bear by the stream, preached God’s word and the bear was so moved he asked me baptize him.” (clearly they had talking bears in his neck of the woods)

They both look towards the Rabbi, who is bandaged and with his arm in a cast.
“Looking back,” he says, “maybe I shouldn’t have started with the circumcision.”

I took my new girlfriend home to meet my parents.
We had a lovely evening and, after she'd gone, my Dad leaned over and said, "Son, I
think this one's a keeper."
"Awww Dad, what makes you say that?"
"She smells of elephant poo."

I thought I heard the Bee Gees playing in my herb garden, but it was just the chives talking

These have made me giggle thank you.

Two elderly gentlemen from a retirement home were sitting on a bench under a tree, when one turns to the other and says "Jim, I'm 83 years old now and I'm just full of aches and pains. I know you're about my age. How do you feel?
Jim says, "I feel just like a newborn baby."
"Like a newborn baby?"
"Yes; No hair, no teeth and I think I've just wet my pants.!

Someone in my family sent this message round to us:
“Anyone else looking forward to a long weekend watching catch up tv while sitting in their pants and eating pudding?”

I see Captain Tom has had it on his toes: last seen boarding a private jet.

Sue Gray report and photos to be released today.