Back in the saddle, and quite chuffed 😀

Hello all, would have added this to my "Leg over" thread, but couldn't find it, due to the less than brilliant search function on GN!

Well, first lesson a couple of weeks ago on Tonto (apparently every new rider of my height and weight gets him), the instructor said that I wouldn't be riding him again.

So, turned up on Wednesday to be presented with a gorgeous Irish Sport horse (thoroughbred x Irish Draught) a heck of a step up from Tonto!

After a bit of a warm up (for the horse and me) doing turns on the forehand! Really chuffed that the instructor thought I was capable of that!

Sadly, currently get pretty out of puff when trotting, due to the COPD, and mounting and dismounting is less than elegant

Sorry, probably boring or making no sense for non riders, but just wanted to share my

I'm also 62 and it's probably 35 years since I last rode. I thought about it only yesterday as I was out walking. The fields around here have all been harvested and I was telling DH how I used to love riding on the stubble fields.
I'll never get on a horse again sadly, too scared of injury. There's one or two posters on twitter who video a daily hack which is very relaxing.

Oh how wonderful! I'm 64 and rode regularly until just two years ago - our old mare was retired but I exercised a friend's horse with her a couple of times a week... we lost touch after a series of unfortunate and unavoidable 'crossed lines' and I think she no longer has that horse. I've put on two stone since then and even if any local riding schools would take me, I can't afford the luxury. Our old girl is now gone, galloping free in horse heaven, and I jump at the chance to muck out another friend's horse when she goes away. It's certainly more than just a hobby, it's a way of life.

twiglet I jumped straight back in with a one hour hack, which wasn't too bad, but have since been having half hour lessons, oh my word! Thats hard work!

However, it must be good exercise?

How jealous am I! I had to stop riding about 4 years ago because of painful arthritic hip. I miss it a great deal. Also miss my lovely horse who had to be PTS last autumn (aged 30!). Doubt if I'll ever get on a horse again

Lovely to hear that you're enjoying it.

Commiserations to MaizieD & twiglet ,my cremello 14.2 pony mare was pts when I was pregnant with DS2 (not because I was pregnant).

Rode out a couple of times when DS2 was little, on a friends horse, then sort of let it lapse.

So, after a 30 year gap, have started again!

I started riding shortly after my DD2 started age 4. We went on to each get our own horse/pony which we kept at a DIY livery yard. A decade later and I rode a loopy thoroughbred (not mine) which was traumatised after a fireworks display the previous evening at the prep school next door. It bolted, I was thrown off and ended up in an air ambulance. That ended my riding career.

That's absolutely wonderful Phoenix. I hope you enjoy lots of riding. I'm envious, I used to ride when I was young, but at almost 83 I shan't be taking it up again. But I am surrounded by horses. I live opposite a horse farm, and there are loads of ponies on nearby Dartmoor. I think horses are magnificent.

For the first time in over twenty years we are horse free DD with two little ones has stopped competing.

However the five year old GS is keen and already walks & trots off lead rein so looks like we shall be having some three generations hacking out some time soon.

Enjoy your time in the saddle Phoenix my friend and I used to love hacking our round the roads at twilight so we could (nose)have a look inside the houses before the curtains were pulled.

I rode a few years ago, after a long gap. It was a long way up, I felt uncomfortable and could hardly move the next day 🙄. Soon afterwards my cousin had a riding accident, (horse was spooked & threw her) was helicoptered to hospital and is now paraplegic although being very determined can manage with great effort to ‘walk’ very short distances. She had recently remarried and her life, and his, has changed forever. I will never be persuaded to get on a horse ever again!
Take care Phoenix 🐴

I had a pony one summer when young phoenix.
I used to gallop all round the garden on it. Tuck it up in bed at night and feed it crisps and sweets (it didn’t eat much)
Sadly, the day came when I wore out a hole in its sock nose and it’s stuffing fell out. It’s wool mane got all wet and tangled and it’s one remaining button eye fell off. It’s body went back to being a broom handle and I went on to other things. But we had great fun together for the summer and he never bit me or threw me off. 😀

I haven't ridden for years, despite us having our own horses (for my DD) for 15 years. Always said I would when I lost a bit of weight, but still haven't yet.

Now we have a lovely, but very highly strung, thoroughbred cross who is going to have to be sold next year (heartbroken about that) because my DD is moving overseas. I'm determined to get on her soon to have at least ridden her once or twice before we lose her forever.

) but getting off is another matter! I take me feet out of the stirrups, swing my leg over the back of the saddle, and then sort of dangle, while attempting a semi dignified descent. It seems to take ages before my feet reach the ground

But they do seem to keep putting me on quite tall beasts!

I enjoyed reading this thread. I'm not a rider (been on a horse a couple of times is all), but two of my DDs rode. Also my eldest brother and his wife rode a lot. Their horses are too old to ride now but still 'in the family'. 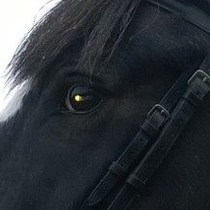 I got back in the saddle in my late 30's after 13 years of not riding - turned out there were a few of us 'Mummies' who used to ride so we all went on an amazing 2 hour hack (fast hack!) around Windsor Great Park - it was wonderful getting back in the saddle and it was just like 'riding a bike' got on and just did it! My God I couldn't walk for a week afterwards!! Anyway we then got let out of the house on a Sunday morning once a month, marvellous!

Roll on several years and I became unwell, unable to work too, so I joined the local Carriage Driving for the Disabled and loved it, BUT it wasn't quite enough, so at the age of 50 I finally got to have my own horse! I found to loan a beautiful old Gentleman called Sydney, who was 22 but had been there, done that, got the T-shirt but needed a quieter life. We just hit it off completely, he became voice activated for me and would stand for ages at the mounting block as it was a 2 man job getting me on and especially off! Didn't behave perfectly for anyone else mind, just me! Sadly, eventually it took me longer and longer to recover after each ride so had got some sharers sorted for him - a couple of days before we were about to move him however I found him VERY lame in the evening. It looked as though he had been playing and running up and down with the younger horses, so I gave him some extra Bute and organised the vet for the following morning. Sadly he went down overnight and couldn't get up - he had gone down beside a fence and we weren't able to roll him over - it looked though as if he hadn't even tried to get up, as he had been down before and had just needed a bit of a shove to get him to his feet .... I think he knew and had gone down deliberately in that place somehow?

He went with 9 of his best people around him, including his other Mum who I had called, with his belly full of his favourite things - pears, carrots, parsnips, apples off the tree next to his field and Murray Mints - the vet said she had never seen anything like it! It wasn't a pleasant experience, but it couldn't have been any better at all .....

I miss the old boy dreadfully, but it was sort of time for us both to give in

He was such a character ..... his eyes were particularly expressive and said it all!

Fanstastic phoenix. I miss my horses and the freedom of taking off over the moors. They had to go sadly when i was getting divorced and I now have other things on my bucket list before I lose my faculties! Enjoy yourself.