Harry Styles on front cover of US Vogue wearing a dress

Harry Styles (formerly One Direction) is on the cover of US Vogue wearing a dress. There are other photos of him in the magazine too.

Some American (Conservative) commentators disapprove because men should be manly.

I saw some clips yesterday and thought that he looked good. In some ways I think the feminine clothes add to his masculinity.

Is he going the way of Sam Smith?

I think he's just trying to stay relevant and in the news.

The chap has a feminine face to my mind so wouldn't look out of place.
Men of many years ago were born with a rugged look I think

You don't see so many of them now.

But women wear trousers all the time so why not?

Could it be connected with him taking on a Boy George role?

I have not seen it but I do think it is a very good idea if a man in the public eye can wear a dress, without it being assumed that he wants to be a woman.
I would be pleased if he can make other boys and young men understand that if they feel like wearing a dress now and again, then they can do so without feeling the need to go to a gender reassignment clinic and start on a road to transition.
I remember some years ago David Beckham being criticised for wearing a sarong skirt. It did not make him less of a man.

I feel much the same about Vogue, as I do whenever I pick up the "Style" magazine that comes with the Sunday Times, insomuch as I feel like picking it up and hurling it across the room, so full of expensive old crap it contains within those pages it begs the question who the hell are such fripperies aimed at

Much of high fashion is a load of old pretentious crap, I admit I was seduced by much of it in my younger days, and I appreciate that it is an industry that under normal circumstances, would put a fair amount of money in government coffers........but it's a world inhabited by the most pretentious of people and it's kind of wrapped up in some faux worthiness these days. Witness the awe on the faces of acolytes gathered around a catwalk as if they are about to witness a second coming instead of some over priced preposterous garment

Harry Styles, Victoria Beckham decked out in some costly frock matters not one iota, it's all a load of superficial, self promoting and deeply un interesting bollocks!

Harry Styles, Victoria Beckham decked out in some costly frock matters not one iota, it's all a load of superficial, self promoting and deeply un interesting bollocks!

Couldn't have put it better myself; nuff said. 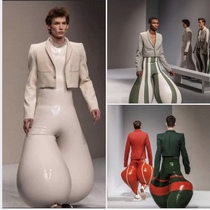 Poor lad in those photos! Bet he felt a right pillock wearing them!

Why does anyone care what he wears? Except maybe his mother.

To be honest if my son or grandson turned up for tea wearing those balloon trousers I don't think I would be able to stop myself from collapsing with laughter, but if that's what they are happy wearing so be it.

Dadima oh my goodness. I wouldn't have believe those if I hadn't see those pictures.

I'm with TeeeiBull too. Well put.

TerriBull, why don't you tell us what you really think. 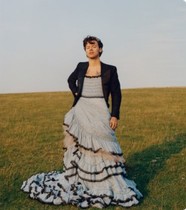 Is this one of the photos referred to. I don't have a problem with it. I doubt whether he will be wearing a dress for his gigs.

Terribull you are forgetting that haute couture provides a lot of skilled employment for some people. If I remember rightly the lace for Kate Middleton's wedding dress was hand made in France and that work would have lasted several weeks/months.

Many haute couture companies use Scottish tweeds in their winter collections.

So, please don't knock it all. I don't suppose that the "garments" in Dadima's photos are intended to be worn other than to get someone (plus the fashion house) into the magazines.

He looks ridiculous. Lost the plot.

Dinah, I'm not forgetting that, I recognised it in my post. I'm not having a go at you for this thread either, it is a valid talking point. My beef is with this great swathe of "Look at Me!" c'lebs, I know it's bang on trend to have an ambiguity about one's gender at the moment, but in the great scheme of things and given we are living in the time of Covid, why should anyone give a shiny whether Harry Styles wants to prance about in what looks like a voile dress. I think haute couture, is admittedly a money earner and as you say provider of skilled employment, that I accept. I just wish these people who seem so far up their own exhaust pipes weren't put out there as wonderous individuals to fawn over with awe and wonder. I'll reserve those feelings for Marcus Rashford who is not only instrumental in getting something wholly worthwhile off the ground, I also read recently that he has now started a book club to encourage the young to read more. Good on yer Marcus

"So far up their own exhaust pipes"...

He just looks ridiculous. Done for publicity probably. I agree TerriBull also I am reminded of the story ‘The Emperor’s New Clothes’.

Does anyone read Vogue nowadays, let alone buy it? I haven't seen a copy for ages; most newsagents don't stock it, and waiting rooms, hairdressers and hotels don't keep it, even before covid. it

This from Billy Connolly.