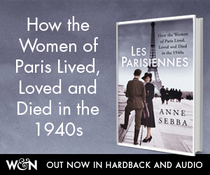 We're giving away a limited edition scarf designed by Emma Greenhill, and a signed copy of Les Parisiennes in hardback.

What did it feel like to be a woman living in Paris from 1939 to 1949? These were years of fear, power, aggression, courage, deprivation and secrets until - finally - renewal and retribution. Even at the darkest moments of Occupation, glamour was ever present. French women wore lipstick. Why?

In enthralling detail Sebba explores the aftershock of the Second World War and the choices demanded. How did the women who survived to see the Liberation of Paris come to terms with their actions and those of others? Although politics lies at its heart, Les Parisiennes is the first in-depth account of the everyday lives of women and young girls in this most feminine of cities.

Read author Anne Sebba's article about Parisian fashion, and tell us which was your favourite decade for fashion for a chance to win a limited edition scarf designed by Emma Greenhill, and a signed copy of Les Parisiennes in hardback.

This competition closes on 29 August at midday. Les Parisiennes: How the women of Paris lived, loved and died in the 1940’s by Anne Sebba is published by Weidenfeld & Nicolson and is available to purchase on Amazon and all good booksellers.

Loved the Sixties, the first decade we didn't dress at all like our parents.

The women needed glamour, t help them feel less downtrodden and occupied. Surely, when you are at your lowest is the time you must dress up and look your best?

I think the decade for French fashion is now - I was at my niece's wedding in central Paris 8 weeks, where she lives and works in Fashion. The outfits at the wedding were beautiful, fun and original. Fashion is always evolving, but the great thing about NOW is that you can borrow from any decade and wear vintage or something totally original and it can work. Vive La France !

I loved the 60s. Being slim, tall and blonde, I was very "glamorous" or so I thought! my clothes were gorgeous - my mother would make them to my design, so I was always different to my friends. I would go shopping and buy no more than 1m50, and 'abracadabra' i would have this fabulous garment...

I liked the way that in the fifties my mother always changed into an afternoon frock. As children we always had to 'dress properly' to go out - although I played in shorts and trousers I was always expected to wear a skirt when I went 'out' What freedom we experienced as teenagers in the sixties with all those miniskirts and very little in the way of undergarments - we certainly thought we were changing fashion

The noughties! (2000) Because that was when a close family member moved to live in Paris and I started to visit (countless visits courtesy of cheap flights!) Just walking down the streets there - the women are the epitome of fashion. How to look classy, groomed, original, chic, even in the simplest or most basic of outfits. I learned "less is more" and how they manage to look casual without ever being scruffy. Oh and makeup or lipstick just to put the garbage out! All regular "ordinary" women I hasten to add NOT models or wealthy. I guess what I actually learned was ALL decades have fashions but it's how they are worn which makes the memories!

I think this decade, there are some lovely clothes! And I like the clothes of the fifties like the movie Grease. My era was the eighties fab era but horrible clothes!!

I loved the clothes of the late 50s to mid 60s. Dresses were so pretty and feminine, and those stiff net petticoats were to die for!

I loved the neat A lines and Mary Quant geometries of the ? 60s?

I had a lovely shift dress in 1959 when I was fifteen years old which I wore to a Halloween party. Across the room was my future husband but I didn't know it at the time. I also had a mohair skirt and underneath wore a petticoat stiffened with sugar and water.

After rationing when the 'new look' came in. Women had more money or coupons to spend on material and so in came the full skirts and petticoats rather than the years of austerity and straight skirts. Clothes in that time were fun for the first time in ages. That style lives on today and always looks sensational

In the early 70's I made most of my own clothes, I would buy fabric on Saturday morning and I'd be wearing the new dress in the evening for a night out. Those were the days.

Late 60's when we unstitched the side seam of our trousers up to knee level and inserted a floral patterned triangular insert to make them into flares. Those were the days!

Nana3 I would have loved to be able to make my own clothes but my entire family were outdoorsy types and no one had the skills to help me. The best I could manage was a basic wrap-over skirt.

I liked the early 70 mini,midi and maxi skirts were around,lovely big collars,and sleeves on blouses,tank tops !
E enjoyed wearing them in my teens wouldn't want to be seen it it now

I liked the lovely Laura Ashley floral dresses of the 1970s too. Can you remember making chokers from velvet ribbon?

Definitely the 50's. The big skirts with petticoats, as a small girl seeing older cousins dressing up to go out, I though it was wonderful. They needed something after the war and all the rationing.

Although I wasn't around then, I love the fashion and style of the twenties, all the beading and fringing, flapper dresses and pretty shoes.

I'm a seventies girl. I loved the wide trousers that had to be long enough to cover our platform shoes. The tops that stopped at our midriffs. I loved maxis and midis and minis and the freedom to choose what length we wanted to wear. Long scarves that wrapped around our necks many times and trailed on the ground. Bright white chiffon scarves we tied around our necks so the ultra violet lights in the disco would make them shine (as well as our white bras.) Hats,berets...it was up to you..seventies was the best.

The early 70's was the best era for me. Everything was swirly, colourful and psychedelic. Remember the cow bells that people used to wear LOL!

Does anyone remember BIBA ? I've still got two bottles of bath oil from there.

oh the 70 was my fav,So many different kinds of fashion, platform shoes that were like house bricks!looking back at photos now i laugh my head off, What was i thinking of when i bought/wore THAT. lol

It has to be the 50s - love the petticoats and Grease style skirts. Music and dancing were also part of the fashion.

How can parents do this?

Does anyone know what this plant is?