Why our death rate is one of the highest in the world. Sir Michael Marmot, author of the December 2020 report “Build back Fairer” and Professor Linda Bauld were interviewed on this point on “Today”

I have summarised but you can hear the interview at 1.36 minutes in to today’s programme.

This is what I took from it. Firstly prior to the pandemic:
1)The slowdown in improvement in life expectancy was more marked in the UK than in any other rich country except Iceland and the USA.
2)There had been a large rise in health inequalities, with health for the poorest people outside London, getting worse.
3)Both life expectancy and healthy life expectancy, particularly for women, was going down.
4)There was a mirroring of inequality shown in deaths profiled in Covid 19 mortality to inequality in mortality from all causes.

The speakers rejected the idea that failure came from the public’s behaviour being any different to people in other countries. It was systems failure. The quality of governance and the political culture had led to the large inequalities in society that had been growing and the lack of investment had also led to our lower levels of health coming into the pandemic. The reduction of investment in the public sector including the regressive cuts to public spending and the political culture led to a lack of focus on Test and Trace. The political culture had also led to an inability to recognise that we needed to address international travel.

Disinvestment in Public Health since 2014 which has seen about a 25% reduction in spend per person. We also have burden of non-communicable diseases which has grown in this period. Only 8% of those who died in Scotland from Covid 19 did not have an underlying condition and that is particularly the case for those who died who were younger. Our government also failed to understand or recognise that this was not a pandemic ‘flu’. It was a different kind of virus and we needed to respond more like South East Asian countries.

Suggestions for what should be done immediately were:
1)Recognising the common good and the lack of investment that has been made in it.
2)Recognising the important role of government and public service. You can’t get away with defunding public services for a decade and then expect to be in a good place to manage the next pandemic.
3)Recognising the failure of Test, Trace and Isolate appallingly managed by the private sector. If it had been given to the NHS and local Public Health could they have done a better job?
4)Recognise the problems of deep seeded inequalities.
5)Aligning our health improvement and our communicable disease response. We need to deal with non-communicable diseases at the same level as we deal with communicable diseases.

Only if we have a healthy, more equal population will we be better prepared for the next epidemic or pandemic.

PippaZ, that ALL sounds like the Britain and British government that we recognise. Leaching of money from tax payers into the private sphere aka, key Tory pockets. Resulting in growing poverty and hardship among those who need the support the most.

'Failing' has all been done knowingly, not through an actual attempt at success. 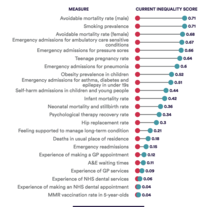 Thank you for this PippaZ. I don't watch a huge amount of TV news but I do read a lot from different sources.

I was up late last night. After the news about the figures, I went onto the Nuffield Trust site. Spent hours looking mainly at the reports about inequality. This morning, I'd started to read The Marmot Review.!
Having a break now and then picked up your thread. I'll have a look at the Today programme.
I'm attaching a graph published by Nuffield "How have Inequalities in the quality of care changed over the last 10 years?"
They compared indicators measuring the quality of NHS care for the 10% of people living in the most deprived areas and the 10% of people living in the least deprived areas of England to see how the results differ.
They constructed an inequality score that is comparable across different performance measures and over time. A positive score means that the most deprived areas are doing worse, and the closer to 1 the score is, the greater the inequality between the least and most deprived.

I have little if any confidence in the present government acting quickly and decisively regarding this.

It's been a known fact for years judging by annual deaths. Every year the death rate has increased each winter---and getting worse.

Nobody in Parliament has done anything about capping the prices of greedy fuel companies for a start. Gas/ Electricity.
It's vital that everyone keeps warm in the winter in order to remain healthy, but there are thousands who simply can't afford to and I think it's criminal !

To be both ill and cold is a killer which is why we have so many deaths in Winter ! Don't politicians get this ??

*Meant to add*: The Covid-19 Marmot Review is on the Nuffield Website. It is lengthly but I went straight to Chapter 10 the recommendations.

Interesting graph Muse. I will be interested to here what you get from the review too. I have taken too much time, this morning, whittling the interview down to what posted but I will try and look at it later on.

I think one of parties should grab the title "Build Back Fairer" as their simple aim going forward. Every time I hear the PM say Build Back Better I have to ask - for who?

PippaZ. Finished Ch10 of the Review and sent it to my conservative MP. I hasten to add, he didn't my vote.

This is part of my email to him.
"There are pockets of inequality in this county. According to latest figures, 17 Cornwall neighbourhoods are among the 10 percent most deprived in England. 6 of these are in your constituency.

I hope in the very near future you will get the opportunity to read at least Ch10 of the Report. I’d then like your comments about what you as my MP intend to do and how you will work to make the current government act quickly and decisively on the recommendations from the Marmot Review.

The Report is attached for your convenience".

I'm going to send the report to all parties in my area. It's all there PippaZ. From short term goals to long term. It can't be done piecemeal though. A big financial commitment across all areas it covers.
It refers to another report: Marmot Review 10 Years On. This needs to be read by politicians alongside the Build back Fairer one.

Anyone remember The Black Report - not sure things are any better than then re health inequalities and the austerity years just made it worse. I would add the constant reorganisation in the NHS and other public services have been an enormous waste of money and served only to increase bureaucracy.

I agree, BigBerthal, that we have seen and heard it all before, probably since pre the Black Report in 1980. Since then the idea of a common good has been kicked into the long grass and it's now "let's blame everyone but ourselves".

This is one of the things the government has happily got us doing right now - I refer you to some other threads on here at the moment - as they divert the blame from themselves. It's always "the other" and I wonder just how often we have to see this before we realise we, or at least some of us, are being played.

The one thing that very clearly came out of the discussion by the two eminent scientists is that the behaviour in this country is not particularly better or worse than in any other country in applying the information people have been given. So we have to look elsewhere to find out why we hit the horrifying numbers and again, in cautious language of scientists that we may wish we heard from politicians, the blame lies fairly and squarely on the governance of this country over the last ten years and to some extent since pre 1980. And it lies with the government for failing to recognise what we had was not a flu - when other countries did - and how we needed to deal with it - which other countries also did.

The only problem is that those on this thread are probably all aware of these things while elsewhere they are going hammer and tongs working who they can blame next; which group can be provided as the governments whipping boy and scapegoat. Perhaps we should suggest that those who voted this government in should own up now [sad smile]

Now we're being deprived of more vaccine in the North West---the worst hit area on the map.

I think I am missing how that relates to the OP EllanVannin. Can you expand a little?

Maybe those who earn more or have more money should be paying for health care and forced to take out private insurance? It would get more money flowing into hospitals and they would build private hospitals .

Per 100,000 of the population Belgium ?? Has a higher ratio. There are lies, damm live and statistics.