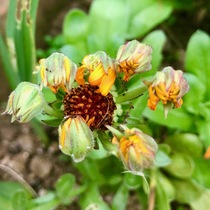 Or is it unusual? I don't really know, and hope someone else might. I found two of our English Marigolds this morning that had finished and needed deadheading. However, when I looked closer, I could see that each of them had several new buds sprouting around the finished flower - the stems are coming directly from the calyx. I have never seen this before and none of the other flowers have developed this way once finished. Is this common? Have I just never noticed before? The third photo shows one of the other, 'normal' deadheads.

Never seen this before Bath send a pic to the RHS?

Yes I was thinking about that lemon - didn't want to do it though without checking if it was common or not! I sent them a pic once of a five petalled lily - i.e. one petal missing (not just fallen off

) and they replied saying it's a not uncommon genetic flaw.
The two marigolds like this are on the same plant, whilst the other pic I uploaded, of a normal deadhead, is on a different plant. So I'm thinking that plant itself is genetically changed in some way.

That’s very interesting, I’ve never seen anything like that before. Is it a genetic abnormality?
You might have stumbled on something truly remarkable!

And do you know what's going through my mind now? Supposing each of those little buds flower as normal, and then each of those flowers sprout more buds from their calyces!!! By the third generation of flowers, there could be 49 blooms on each stem

I’ve done a bit of Googling. I think it’s Phyllody, resulting from an in balance of the plants hormones.
Have a look and see what you think.

Oh thanks J52 I'll have a look. I did try Googling (why do my fingers always type Goggling?

Ah, one of my google results was for the RHS website where, within the description of Phyllody, they mention other related conditions. It seems that this little plant has "flower proliferation" :

"What is proliferation?
Proliferation is a disorder that usually affects the flowers of a range of plants including clovers, the daisy family, opium poppies, plantains and roses. Bellis perennis ‘Prolifera’ – the hen and chickens daisy – is a stable cultivar that exhibits the phenomenon reliably with flowers arising from within the main flower. Occassionally a triple-tiered effect with flowering arising in the second set is seen.

"The opium poppy ‘Hens and Chickens’ is an example of where secondary flowers are formed around the main flower.

"Another type of proliferation is occasionally seen in plants with solitary flowers. Certain roses seem particularly prone, with the flower stalk appearing to grow through the flower to produce another flower, creating a two-tiered effect .

"Symptoms
The symptoms of proliferation become apparent when;

"The flowers continue to producte new growths beyond the stage at which growth usually ceases
Within the flower multiple buds appear around OR within the open blooms
Not all the blooms on the plant are usully affected; in repeat-flowering roses for example, the second flush is usually free from problems
Control
Prune off the affected flowers and the next flower produced by that stem should be normal. However, there is no necessity to remove affected shoots if they are considered pleasing.

"Cause
The cause of proliferation is unknown but, when it appears unexpectedly, it is probably due to a random genetic mutation at some point during the development of the flower.

"It is possible that physical injury may be involved, perhaps by a late frost.

"Where proliferation occurs each year, a virus might be the cause and affected plants will have to be replaced."

I’m not sure whether it is unusual, but I have had this on pot marigolds from time to time, two or more buds growing seemingly attached to the main head. Once the main flower has gone over and been deadheaded it leaves a rather ugly unbalanced looking plant until the extra heads grow out. 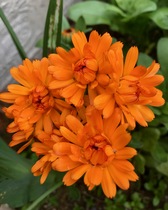 Well this is what those extra buds look like now - rather pretty I think!

Politically homeless? Is there hope?