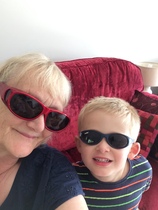 My DGS 2 has speech problems and can't pronounce Granny so he calls me Dandy. He calls his Grandpa Dampa. 😃

Our 2 year old DHS calls us Nana and Nan Nan.

He calls his two Aunties Ray and Bob which confuses some people !

My eldest DGS 27 now,started by calling me nanny ana,which over months changes to just nana and has stayed that with all DGCs that followed,when DGS1 was born I was 41 and far to young to be called grandma (such vanity)

I've always been Mamma, my husband used to be Gan Gan, but is now just Grandad

My DSD has 9 grandparents, eight living. (Two sets of natural grandparents, two sets of step grandparents, plus SFIL.) She has two Grandpas (my father and her mother's father), one Grandma (my mother), one Nanny (MIL), two Granddads (FIL and SFIL), one Nan Nan (stepdad's mother) and one Pop Pop (stepdad's father). I am only 20 years older than DSD so I could be a young grandmother. I am thinking about asking if my grandchildren could call me Mimi or Nana. To me, "Grandma" is somebody who is much older than I might be. (If DSD has her first child before 30, I would be a grandmother before I'm even 50 years old.)

I’m Mimi. My granddaughter’s other grandma is GiGi. Great grandmother is BaBa.

My youngest grandchild age 19 has called me Bro since she was 5.

If you're a new grandparent and looking for some inspiration, we have a great page on names for grandparents: www.gransnet.com/grandparenting/names-for-grandparents

My personal favourite is 'nanoo'

I opted for Grandma after my first grandaughter was born. Her other grandmother is called nanny by her other grandchildren, and because she is shorter (and slimmer) than me I thought I would inevitably be called "Big Nan." However, she couldn't say "grandma" and called me "mam-ma." Now that's what everyone calls me. Ironic, because my first choice of name was "Mamie', which is what my French cousins calls their grandmothers, and what I really wanted to be called, but it was vetoed as pretentious, as was "nonna."

One for the gin lovers

Toilet seat covers - are they a thing of the past?

Spoil a film title with one word