I have just seen news reports of measures in the budget. First I've heard that a budget was imminent. When did they sneak that up on us?

They didn't but they'd rather we didn't think to much about what was in it.

It has been in the news off and on for about six months. I think it got lost behind all the smoke and mirrors surrounding Brexit, insurrections among Ministers. President Trump, North Korea, and recently Mr Mugabe and Zimbabwe

I have never experienced such a non budget in all the years I have been interested. He really should throw in the towel.

So the top line of the budget is that growth, which wasn't great, is slowing down even more dragging down living standards. The average individual will be £700 a year worse off than was forecast before the election. That is dragging down government revenue affecting public services.

The NHS did not get what it was asking for. It got £2.8bn spread over the next few years with £350m for this winter. Not the £350m a week the Brexit lot promised. It sounded as if some money would be found to pay nurses the recommended pay when it comes round but there was no extra cash for other public sector workers.

The headline grabbing abolition of stamp duty for first time buyers for homes up to £300,000 is quickly being seen as a windfall for the seller not the buyer as it is likely to put prices up. Council house building has not been boosted to give us the building some Tories have be saying is necessary. (Labour has been saying this for a long time). It looks as if his pledges on housing will not take place until the mid 2020s - eight years away.

Tweaks are being made to Universal Credit to cut wait for payments from six weeks to five.

An extra £3bn is being set aside for Brexit preparations.

I will give him that the deficit is down - but no targets met. I think we all know that you can sustain cutting back to bring your debts down for so long but we should have started putting money into productivity raising capital investment long ago.

Didn't catch it all although checked these figures so it will give you a flavour and probably enough for now.

Not even abolition of the tampon tax, which would have been a quick win. And GracesGran The stamp duty relief will only help if it leads to more starter homes being built, which they are not being since less profitable for developers - is that right?

Elephant in the room - Brexit was hardly mentioned.
£3 billion for preparations is nothing in the big scheme of things.

Another thing I noticed was that most of the extra money to help councils, not that there was much, was directed at Tory councils. Tees Valley mentioned a couple of times; west midlands mentioned 3 or 4 times. Nothing like rewarding your friends.

The headline £2 billion ‘extra spending’ figure for Scotland has much less to it than meets the eye.
Firstly, it is spread over this and next three years. Secondly, and more importantly, more than half of the headline £2 billion (£1.1 billion) is in the form of Financial Transactions. That’s money that can only be used for limited purposes and must be repaid by the Scottish Government.
Taking account of today’s announced changes, the 2018-19 Scottish Government revenue budget is still facing a real terms cut of over £200 million - imposed by the UK government.
And the Chancellor’s announcement of an extra £350 million for the NHS in England this year translates into net increase in the Scottish Government budget of just £8 million!
There is not an extra penny, or any real commitment, from UK government on lifting public sector pay cap. The Scottish Government will lift the cap.
The announcement on oil and gas very welcome, if overdue. As is the announcement on police and fire VAT - though no backdating disappointing and unfair to emergency services.
There is lots more to mull over but early indications are of more smoke and mirrors than substance.

I agree winterwhite. (Are you new? I don't remember seeing your name before. If so - welcome and hello)

One of the biggest disappointments was that they hadn't opened up a big build project for council housing. That would immediately start bringing down rents, returning houses for sale and encourage prices to stay at a reasonable level. There were a lot of sticking plasters and no major surgery from what I could see.

Universal credit; if they can advance money more quickly, remove the one week waiting time (although they had promised to reduce by two weeks) and give those on rent an advance for two weeks, why can't they sort it out properly?
People will still be waiting for five weeks minimum, and have to pay back their advances.

Did you notice the timings, as well?
Some of those go as far as 2050, by which time even Hammond will be dead, or at least not care.

He sounded so pleased with himself announcing the Scottish increase that it doesn't surprise that it was all smoke and mirrors paddyann. What does surprise me, reading your analysis, is just how much of a magic trick it was!

Good article Jen although in a way I was glad that the hidden area of the governments incompetence with the economy was allowed to come out of the shadow of Brexit. I think we need to keep talking about it because, once people have absorbed the real facts about the Tory economic failure, we need to understand just how much, on top of this, Brexit will take us out of top country status as we become poorer. 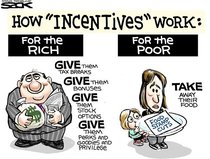 Tory message. The budget hasn't changed it at all.

I bet the government wish saborne hadn't set up the OBR.

Sorry, who's saborne?
I meant Osborne, of course.

This is brilliant, but not to be read by Brexiteers.

"The NIESR think tank added its own warning that “an exit involving a sudden stop” [aka Hardest of Hard Brexits] would pose a “significant upside risk to productivity, as well as the prospects for a sustained world recovery”. One more thing on Brexit may worry some Tory MPs. Hammond welcomed the OBR forecast that there would be 600,000 more in employment by 2022. What he failed to mention was that the OBR expects three-quarters of those jobs will have to be filled by new migrants."

Social care was not mentioned at all.
Hammond also wants the NHS to sell off land and take out PFI. Wasn't it the Tory government who criticised PFI when Blair used it to build new schools and hospitals?

I always thought that the opposition leader was given an advance copy of the budget, to respond properly to it.
Apparently Corbyn wasn't.

Just listening to John McDonald on Radio 4. My worry is that every day we have this 'hair shirts for others' government will mean it becomes more and more difficult to turn things round.

The Tories promised they’d balance the books by 2015 but they keep pushing their deadline back.
After seven years of painful austerity and a decade of deadlines, when will it end?

The thing I don't get is why a small majority colluded with this government in only making cuts. Now I am listening to Hammond saying "the problem is our productivity" over and over again. They were being told, from day one, that, as well as holding the spend on everyday items to the amount of income they were getting they must invest in capital projects such as infrastructure, teaching and training, encouraging company investment in technology, etc. It is not rocket science. You can quite justifiably borrow for these areas; you always could, nothing has changed. That will increase the income into the government for everyday spend. Other countries do it and the books will balance.

Thank you GracesGran. Yes I am new. Interested in politics, esp future of social care, and fervent Remainer. Wish I knew more about Scottish affairs but am learning through these posts! Much of this we knew was coming, or rather wasn't coming. Something that esp irks me is using the wretched stamp duty relief as a claim that they are helping the younger generation. Nothing to help the 'free childcare' fiasco, or schools or children's social care.... well, nothing for anybody.

I think the Government should be ashamed that Social Care in this country is on its knees and they are ignoring the plight of many elderly people (my mother among them) who are suffering because of inadequate care caused by lack of funding. It really is a national scandal and many families are bearing the brunt.

Twice welcome in that case winterwhite

I do love the exchange of information we get on here and there are several people with really in depth knowledge in some areas.

Just caught something on the UC. David Gauke to give a statement in parliament. The journalist confirmed the waiting time will be reduced from six weeks to five but this doesn't come into effect until February. Housing Benefit will continue to be paid for first two weeks but this doesn't come into effect until April. So those people who were going to have a rotten Christmas because of UC will still have a rotten Christmas.

In the budget book, but not in the speech, the government has confirmed their will be a slow down in the roll-outs. Pressure has obviously worked to some extent.

The consensus seems to be that this was a budget for the party and not the country or the economy.