100 Years since women got the vote

6th Feb is the anniversary of the Representation of the People Act when women over 30 and working men got the vote.
What are you doing to celebrate?
You could join the Askhertostand 50/50 Parliament campaign
5050parliament.co.uk
I'm commemorating it on 4th March with a performance about the Newcastle Suffragettes
www.newcastlegateshead.com/city-guides
Any other celebrations going on?

Thank you Trisher for your post & making us aware of this anniversary. I have always felt a debt of gratitude to those suffragettes who fought for the rights of women,which I feel we so often forget as we go about our daily lives. I do believe on occasions some woman trivialise ( for want of a better word) those rights that were hard won by now becoming almost as biased against men .

There was more to it than just being over 30, though. The women also had to be householders or married to one, or graduates of British universities. Strictly middle class!

I am celebrating by remembering that I have always used my vote, and always will. It was hard won.

Absolutely Grandma 70s, I once drove a few girls who I worked with to the voting booth after nagging them about how lucky & indebted we all are to those brave woman who fought for our rights.

All men and women aged 21 or over were granted the right to vote ten years later, in 1928. My mother turned 21 in February that year. It was also the year she graduated from university. Things were looking up for women.

The only suffragette I can claim in our family is rather remote, my husband's step-grandmother. My mother and grandmother were certainly with them in spirit, though.

It's thought that the reason women didn't get the vote at 21 in 1918 is that if they had been given it, there would have been more women than men voting in the next election. So many men had been killed in WW1.

I haven't heard that interesting theory before, trisher. If it’s true, I wonder why they thought it would matter if more women than men voted?

The problem of how women would vote was a constant headache for some politicians. Many of the Liberals feared women would support the labour party. It's one of the reasons the vote took so long to go through. Women could vote in local elections much earlier The Local Government Act 1894 gave all women, irrespective of marital status, the right to elect, and also to stand for election, for parish councils, district councils, school boards and Poor Law Guardians. Just six years later there were 1975 female Poor Law Guardians and about 200 women members of school boards.

Women in switzerland were still not able to vote in the late 60’s. I had a swiss boyfriend who was lovely, but i couldn't imagine living anywhere where women didnt vote.
I read recently that the only democracy left where women cant vote is the vatican city.

I didn't know that silverlining.
I had a friend who was going to marry a Swiss man but decided not to in the end.
(not you, was it?

I was only half-listening to the One Show this evening and an author came on who has written a book about Sophia Duleep Singha, an Indian Maharaja's daughter who became a British surragette.

oh dear, I should check before I post.
A British suffragette.

It's one ofthe books available to win on The Radical Tea Towel site. You couldbuy a tea towel as well
www.radicalteatowel.co.uk/february-book-giveaway

women under the Franco regime didn't get to vote either until 1976.My granny was a suffragette ,she was arrested for knocking a policemans helmet off during a demo and had to appear in court.My grandfather had to go along with her and promise she would "behave" the sherrif(Scotland) told him to take her home and speak sternly to her so she understood what she had done and to make sure she stayed away from these women in future and behaved herself ....lol Not a cats chance in hell of that .GF said she told him as they walked out of the court .I've always been very proud of her ...

Was this the book jalima?
wordery.com/sophia-anita-anand-9781408835470?currency=GBP&gtrck=MktWbXd3dnYrN1FyRTZSMExOSkI4Zk82SkdaRzBmK1JVc3ljRFdHTGtkL0g2eXRNNjBkTjlEQ0E5dXU1RVF5VnA4YlcyYVN3d3AwamNrci9iOTltVVE9PQ&gclid=Cj0KCQiAnuDTBRDUARIsAL41eDoSsf5fzFas4G-iJThre6eadsX4v-vTbWtp6fZafxaJXuGJse3jasYaAoKTEALw_wcB
I remember when it came out thinking I must read it. Going to order it from Wordery now.

Anita Anand is the woman who presents Any Answers on Radio 4. I think she is brilliant - very polite, cool, calm and collected.

I must have drummed it all very well into my daughters heads as they usually phone to tell me they have been to vote (not how they voted and I don't ask), I am surprised when talking to say my young hairdresser that they know nothing about the struggle, is nothing taught in schools? maybe it will get a mention today, I hope so.

On many occasions when I have considered none of the prospective candidates worthy of my vote I have always remembered the suffragettes and done the best I could. I thank God for them and all people who suffer personally for a cause they believe would benefit mankind (certainly not ' peoplekind')

I kid you not a woman at work 50 years old, didn’t know what a suffragette was. I think my chin genuinely hit the floor. I told her that women died etc for her to be able to vote. Her reply was ‘they didn’t do it for me they did it for themselves.’ I still tell people about her as I’m so astounded she really didn’t know. Just shocking

No amazing series to celebrate the Suffragettes on TV is there? I loved 'Shoulder to Shoulder' when that was on.

'Suffrafette', the movie is on this week but I found that rather insipid given all that went on.

There have been women on chat shows this morning, none of them worthy to lick the boots of the women who won them the vote, basically they were all flogging their latest book and simpering at the camera.

The campaign took the best part of 100 years and seems to have been condensed to a little stone throwing and the Derby day incident.

The women were abused by the authorities in every way possible and are not venerated nearly enough.

I am not sure if they would welcome the notion of a 'pardon' for their deeds, they were wiser than that, braver, and proud of what they did.

A hundred years ago women got the vote and now half of them are vituperative about the way the other half vote. I suppose it is the way of the world.

"Shoulder to Shoulder" - the song from the Mary Poppins film:
www.youtube.com/watch?v=Kvk1NZDFvZU 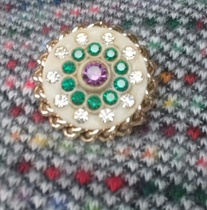 I am wearing a broach that belonged to my grandma. It's only paste but the colours are those of the suffragette movement, green, white and violet (thought to stand for Give Women the Vote) with a chain around the edge. Unfortunately, although my mum wore it a lot I never asked why and there's no one left to ask. As relevant today as it was in Grandma's day.

I'll open the beer! And say cheers to those who don't have this freedom. That's a very pretty broach Mags50, I didn't know the significance of the colours.