Labour and Liverpool -Democracy is dead?

While the country is focussed on Covid there are strange goings on in Liverpool. The Labour mayor has had to resign for wrongdoing (but that's not the focus here). There were three women standing as Labour candidates. One Wendy Simon is acting Mayor, another Ann O'Byrne has been the deputy, and the third Anna Rothery is the city's first black woman Lord Mayor. However LP HQ sent an e-mail to members announcing the process was to be changed and a new short list created. The three women were not informed about it and it seems they may not be permitted to stand.
The e-mail said
After careful consideration, the Labour Party has determined that applications for the position should be re-opened in order to allow the Liverpool Labour membership to choose from an alternative shortlist of candidates.

Sounds rather odd. Hard luck for those three women.

Maybe he is, maybe he isn’t trisher, let’s wait for the full story to come out, which it inevitably will.

Maybe it will Casdon but possibly too late for Labour. There are indications that Anna Rothery will stand as an independent and could be elected or split the Labour vote.

There are a lot of critics of Starmer from many quarters

Liverpool won't be told what to do.

And here's Labour polling under Starmer not so good as Tories

How much longer will Starmer be leader?

Possibly, I don’t know enough about what’s happening on the ground to know if she will succeed or not - my instinct is that there’s something behind the decision other than internal politics in the party. Hopefully there will be more facts emerging shortly.

Whatever the reasons it's a shitty way to treat women working in politics.

She should stand as an independent, people say.

I agree. I've been following this story and there's too much speculation to come to any conclusion.

It's difficult to see though who the LP would appeal to now. Who will be upset by this? Left wingers, women, black people, who will that leave? Right wing men! Not a party for many.

I agree. I've been following this story and there's too much speculation to come to any conclusion.

I’m with Casdon and growstuff, which won’t surprise anyone

I think that Starmer and Evens et al don't like that Anna Rothery is black a socialist and a woman Yes Democracy is Dead.

On tax as on so much else, Keir Starmer's team is fighting yesterday's battles.

It would have been such a great first-first black women mayor. As it is it is most likely that Labour will lose the mayoral election.

That's old news everyone knew she was left wing and a Corbyn supporter. It shows how inclusive Starmer's LP is though.

What is the point of Labour?

Thanks Grany Love Owen Jones-policy driven by focus groups-it explains much. The poster of Kier Hardie and all the issues listed was so applicable still. It seems we have moved such a short distance towards a decent life for all. 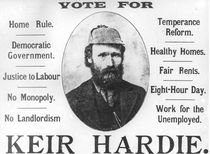 Couldn't help posting it. These are still issues today!

Liverpool is a law unto itself, always has been and will remain to be so.

Need help from a nurse

So has Johnson's latest attempt at gaslighting, convinced you?