Tory government wants to make exposure of their corruption illegal

This government is becoming more like a dictatorship everyday. Truth is not allowed now, if it exposes the government's corruption.

So journalists can be imprisoned for writing the truth about a corrupt government.

MPs are thrown out of Parliament for speaking the truth (Dawn Butler thrown out for pointing out Boris has lied repeatedly).

He's been in talks with Kier Starmer well that's the end of that then.

Oh no a real Boris for Boris!!!

Oh no a real Boris for Boris!!!

Oh god don’t tell me tell me that there is a Russian baby! 😄. He seems entirely incontinent.

Didn't someone pay an awful lot to play tennis with him?

If I remember rightly the Russian lady who paid a lot to plat tennis with Johnson never actually got to play tennis with him. I wonder whether she got some other type of favour?

According to 38 Degrees Johnson is arguing with Patel over her plans to change the Official Secrets Act as he thinks it important that journalists are able to report on issues which are in the public interest.

For the first time I can applaud Johnson for saying the right thing. Whether he can prevent the increase the prison term from 2 years to 14 years is another matter.

The Tories are very friendly with the Russians

Didn't someone pay an awful lot to play tennis with him?

Fancy paying to sit next to Johnson😄.

What is surprising me about this tory donors 'thing' is that people are so surprised by it.

I remember searching the Conservative website some time around 2017 and there it was, details of the Conservative Donor's Club. It gave details of different levels of donations and what each level 'bought' the donor in terms of access to members of the government, Top donations bought you, at least, seats next to the PM or Chancellor at special dinners.. IIRC

Needless to say, that page has disappeared from the tory website...

The Tories have received £280000 from Russian Donors! 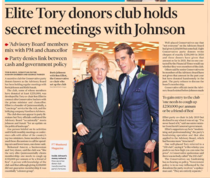 Today is the first day of Parliament’s summer recess, but the next few weeks will be vital in our fight to defend our democracy.
These might all sound fairly innocent -
•Elections Bill
•Judicial Review and Courts Bill
•Dissolution and Calling of Parliament Bill
•Police, Crime, Sentencing and Courts Bill
But when you join the dots, a clear picture emerges.
Put together, they make up a huge power grab by the Government and a concerted attempt to stop anyone from holding them to account.

Kali2 I think that Dawn Butler is the first to actually use the word liar. I've heard Ian Blackford a few times but he uses other words. It would be a good idea if one MP from the other parties referred to Johnson as a liar each day and gets thrown out.

No doubt they would be attacked by some people. It's funny how the messenger is attacked, rather than the message.

Yes, he was very careful how he used his words, every time- but he has called Johnson on his lies again and again. He got around to not using the word by saying Parliament rules would not allow him to tell the House Johnson is a liar- so he said..

Dawn Butler was breaking Parliamentary rules, she knew this and still carried on.

And thank goodness she did. I for one is very grateful- respect.

Exactly this. It actually gave her accusations more publicity. I am sure her constituents had more respect for her.
Of course to call our PM a liar is beyond belief - never heard that before 😂!!!

Not just Hancock, Bethell, Hands and Deighton too.

Hancock, who used his private email and phone to set up deals with his crony’s does not have to reveal then for scrutiny says the government.

Well they would wouldn’t they?

No respect for a liar calling out a liar.

I think you need to clarify that.

Most of us know that it is not permitted within Parliamentary rules to call another member a liar, but Dawn Butler did so deliberately and I admire her for it. For one, it may make a few people wake up to what is going on, and it will of course, go into Hansard. Johnson is a liar, there is absolutely no doubt, and he needs to be called out on it, and I hope more will follow Ms Butler's lead. He has been sacked twice for lying, regularily misleads the house ( or 'misspeaks' as his supporters call it), and his personal life is a disaster zone of lies and cheating. The proposal to silence investigative journalism is chilling, why aren't people bothered? Are we back to confirming what Campbell called the two class UK; Those who give a toss and those who don't? I suspect we may be.

Kali2 I think that Dawn Butler is the first to actually use the word liar. I've heard Ian Blackford a few times but he uses other words. It would be a good idea if one MP from the other parties referred to Johnson as a liar each day and gets thrown out.

No doubt they would be attacked by some people. It's funny how the messenger is attacked, rather than the message.

Thanks Dinahmo I do subscribe to the Guardian but had missed this report.

The opposition needs to follow up Butler’s speech of truth with each and every one of them speaking truth to power.

Butler made history yesterday, the opposition needs to show some spine and do the same.

Is this the norm now?

With UK Covid deaths the highest in Europe, is this living with Covid?