70 years on the throne

What a beautiful Sunday service this morning honouring our queen .

yes, I enjoyed that too. 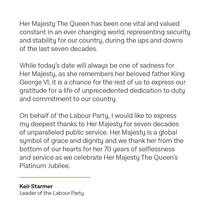 What a lovely service it was

Thank you WW.
My feelings summed up nicely.

Abdication after this jubilee ?

Why on earth should the Queen do that? We have only had one voluntary abdication in a thousand years , I doubt very much that HM will be no 2,nor should she.

A lovely tribute from Keir Starmer.

Now he wants Labour to appear patriotic and flag waving to appeal to older voters.

There is no big deal keeping a job for life no one to answer to.

"It's time to reject the nonsense arguments about tourism, stability and widespread affection for the royals, and take a more sensible look at what the monarchy really is, and what it really costs the country."

"That cost isn't just financial, it is a cost to our democracy, to our status as citizens and to our principles."

"In just twelve months the royals have been accused of racism, climate change hypocrisy, abuse of public funds, secrecy, cash-for-honours, cash-for-access and all the various things associated with Prince Andrew, including sheltering him from justice."

"This is a shabby institution that does not deserve to continue. It is set against our nation's deeply held democratic principles, it is corrupt and secretive and it is bad for British democracy."

"Now is the time to look to a democratic future, a future without the monarchy."

There is nothing to celebrate about the British monarchy

The Queen will not abdicate

Iceland to offer over 60's a ten per cent discount

Have you got a favourite poem?

I’ve got a man coming round….

How to get a prescription for prednisone?