Tory "banter" and women who support it.

Such banter and the support some women give it is not funny. They seem to find the Tory attack on Angela Reyner a joke. They laugh indulgently about it as you might about a small child's inappropriate remark.

Such remarks are about the attack and undermining that is the basic instinct of the male, privileged Tories. This so-called banter sets out to undermine the working-class, those who are female and those whose background may offer more to the governing of this country than their privilege can.

This sort of attack from Tories and the Tory press is nothing new. Johnson has form; his tweets ring hollow and are no more than a PR exercise.

In 1995 Johnson wrote an article for the Spectator, where he argued that children of single mothers were "ill-raised, ignorant, aggressive and illegitimate". We know that parents are as diverse as any other section of society. However, Tory othering has worked for his voters in the past so why stop using it now.

In the same year, Johnson claimed that "uppity and irresponsible women" had a “natural desire” to get pregnant.

In a 2005 article for The Telegraph, he described the poorest 20 per cent of society as being made up of “chavs, losers, burglars and drug addicts".

He may have plastered a little PR make-up over the sexism and classism but he doesn't have to try too hard as the Tory press has those happy to repeat their lies to keep up this attempt to diminish strong, working-class women.

What does it say about those from Johnson's background and those who support him that they have to try and ruin the lives of others to make themselves feel, not only good but capable of doing the job they so want for themselves.

DaisyAnne I agree! As a northern woman from a working class background, I feel that, throughout my career, I’ve had to constantly prove my worth. The ‘ruling class’ in this country looks down on those who are not ‘in their club’. This perspective has been normalised by 12 years of right-wing, elitist Tory government. They pay lip service to equality and fairness but IMO their words are hollow, patronising and condescending.

I wonder how Carrie feels about the ‘uppity and irresponsible’ comment?
After all she was a pregnant single mother who worked. ( not a judging comment )

I am a mother of women who would challenge "banter" -or thinly disguised misogyny, robustly. Just as importantly, I am the mother, and mother in law, of men who would not be party to it. Oh, and I was a single parent, too, raising children who are, now, graduates ( one in the middle of a PhD ) workers and taxpayers.- but, hey let's not let facts stand in the way of our ignorant prejudices. 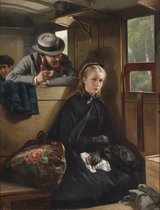 This popped up on my social media today. Just seems apt, somehow...the look on her face...

It's a sad state of affairs DaisyAnne, isn't it, when such views and attitudes are not only accepted politics, but seemingly actively supported by people elected to represent us all.

It's frightening how quickly one person (Boris), for whom leadership is nothing but a vanity/ power project, can bring all the worst traits of human nature to the surface, and actively encourage them to suit his own agenda.

How I would like to re-phrase some of his mysogenous tweets:

For instance, take the one about the children of single mothers being "ill-raised ..." etc.
Change 'single mothers' to 'absent fathers'. Boris himself springs to mind

His own past record is proof enough that this sort of behaviour isn't limited to the poorer classes in society.

I know I am not alone in now, for the first time in my life, actually being both ashamed and worried by what's happening in Parliament. Boris is dragging it down, treating both the whole system and the people with contempt, yet still not enough people around him are prepared to openly say "enough is enough", and rein him in.

I imagine that in the not too distant future, this particular period of Government will go into the history books with a name all of its own. Needless to say, it won't be a flattering one, either for the country or for Boris. It will be looked back on as a an example of how not to govern.

TV or not TV