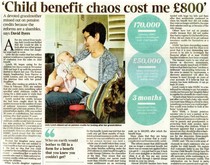 Many grandparents are unaware of the possibility of claiming Specified Adult Childcare Credits to boost state pension. It is possible to backdate claims to 2011. However, some of us have had these refused because our children failed to claim child benefit due to the introduction of the High Income Child Benefit Tax Charge. They have not been warned that not claiming could affect their own pension or those family members who care for their children. Please spread the word. Child Benefit can only be backdated by three months. I am taking HMRC to a tribunal about this.

I missed out on my first year of credits because my DD didn’t claim Child Benefit. As you’ll know, you can only claim the credits in the October following the end of the tax year you’re claiming for, so I didn’t know there would be a problem until it was too late. I appealed, as the guidance online at the time just said that the parent of the child being looked after had to be eligible to receive Child Benefit, which DD obviously was, as the mother of a 2 year old. My appeal was turned down - apparently I should have realised that the powers that be wouldn’t know that she was eligible if she didn’t claim.

I was advised at he time that DD should ring up and simply say that she wanted to confirm that she was eligible for CB but did not want to claim it. Once she’d done this I could get credits for future years, but could not have the missing year backdated. I’ve heard though that the simple phone call has now been replaced by a long, daunting form to fill in.

I have just found research that HMRC undertook in 2018. One participant in the research was 'gutted' to realise that she had been missing out on state pension credits. Elsewhere there are suggestions that HMRC should write to those who have not claimed or that registrars should be giving out the information. They found misunderstandings about the difference between not claiming and opting out. They talk about the design of the CBform, but my point is that parents who know (or think) they are not eligible don't even look at a form as they don't think it applies to them. Even if my daughter had looked at one, she would probably still not have claimed as she knew she was going to carry on working and paying NI. There is absolutely no reference on the for to the possible impact on grandparents. The system of giving out forms in bounty packs has collapsed and would never have reached all mothers so was a flawed system to start with.

I meant to say that my first appeal was turned down. In fact it was basically ignored. My MP got involved and I got £75 compensation as they had ignored my letter and failed to tell me about the next stage of the appeals process.

The crafty beggars, this is not right. Not much help I know, and doesn’t affect me personally, but does some of my friends and will show them this.

Try to persuade them to write a brief letter to their MPs. My MP was completely unaware about this issue and immediately wrote to both HMRC and the DWP even though I hadn't actually asked him to. Mps are unaware because the Briefing paper published a few days ago still makes no mention of the impact in grandparents. Neither did the debate about High Income Child Benefit Tax Charge in September 2019.

The ethics of where vegans buy food