How stupid can a tom-cat be?

Actually, I don't know if it is one cat, but for the last three weeks some-one is making determined attempts to move in here.

The resident cat is not having it - he showed the intruder the door so loudly the other morning that the neighbour heard the kefuffle too.

This morning there had obviously been a cat fight too - the back door mat had been moved four inches. A pair of boots and a new container of body shampoo overturned in the wash-kitchen. St. Joseph would stood in the window, (Fortunately a cheap statue "Made in Hong Kong") had landed on the floor and is now in three pieces and the Christ Child is short of his head!

We are placing bets on whether the intruder (who has wee'd on my shopping bag) is silly enough to come back for more.

Our cat is alternately prowling the garden with his hackles up, and sleeping in the wash-kitchen, so I don't think he is intending to adopt the stranger in place of his dead brother!

Was the door open or do you have an open-to-all cat flap? I had a problem with strange cats using the flap and weeing up the walls and even on my mobile phone charging in the hall, so changed to a flap that recognizes my cats' microchips. End of problem until the summer when I leave the back door open when I am at home!
Good luck with sorting your problem.

Hi, can I suggest you get a cat-flap? They can be installed in glass, and operate by microchip recognition. You and your cat could rest easy!

I know a cat flap that only let our cat in would solve the problem, but he wasn't brought up with one, as we used to live in a flat. He utterly refuses to use a conventional cat-flap and has me running back and forth to the door all the time, so we cut a hole in the garage door for him.

He's 12 now, adaptable in other ways, but is determined against a cat-flap he has to push! Little (spoiled) brat! 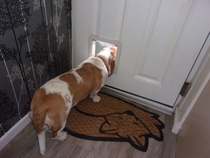 Oliver uses his cat flap from the kitchen but he also invites some of his friends in to share his food he doesn't mind them coming in but chases them out of the garden,meanwhile Dolly will poke her head through the cat flap to view what is going on in the garden with the cats.

After I had the cat flap installed all I had to do was to show Tara how it worked and she has never looked back since. She would prefer her servant, me to stand by the door, opening and closing it for her but as that only happens when I am going out- she either uses the catflap or stays indoors- her choice.

I did fit a catflap which recognised her microchips but it was 2-3 seconds longer in opening and a couple of times a bully bit her on her rear so I reverted to the type she could fly through. He is too thick to work out how it works.

glammanana I think Dolly has the right idea- watching what is going on outside from the comfort of her own home and not getting into any trouble while doing it. She looks gorgeous.

The Horizon programme some time ago put cameras on domesticated cats to track their movements.

It as fascinating to see that most cats seem to know the cat flaps in their area and go in search of bowls of cat food, letting themselves in when no one is around. Mice and birds are not a food source any longer.

They are not even looking for fights with other cats.

I think an un-neutered Tom is always a bother to other cats and householders because of their spraying habits. It makes cats nervous if something else marks their territory. Local cats call on ours but they tend to laze about in the sun watching each other. They don't seem to want 'bovva'. They are all well-fed by the looks of it.

One of us always gets up to open the door even though she has a way in. We are her doormen. How do they do this to us? She too pokes her head through the outer cat flap to survey the scene.

Such daft creatures, but you never let on that you think they are.

Dolly looks lovely and just as silly as ours Glammanana 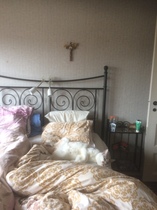 Dolly is a lovely cat.

Here is my Trold resting on his laurels in his absolute favourite set of bed clothes, which camouflage him beautifully. He has pale brown patches on his back, paws and a completely brown tail. He gets annoyed if I disturb him by making the bed,, which I do.

I'm beginning to hope the intruder got the message, as he hasn't been back.

grandtanteJE65 Your cat Trold is such a character😍
He definetly looks comfortable.

I often 'lose' one of my cats as she's a silver tabby and blends in very well with the grey furniture - unfortunately her hair does too!

Buy a cat flap but remove the ‘flap’ bit. Then he can go in and out through what is effectively a hole....but they come with a part that can be slide into place to block the flap when required eg night against marauders.

We have an old rescue dog who is too arthritic and nervous to tackle the flap bit. That’s how she enters and exits the house and we block the flap when we want to keep her in.

- not to suggest this as a solution but random Toms stopped trying to make free with our hospitality once we got a dog.

Dolly is a dog!

Which is why he won’t fit through the cat flap.

My dogs go through the cat flap!

Update: I saw the intruder yesterday evening when I surprised him finishing our cat's dinner.

He is stripy grey with white socks and definitely not a stray. He lives further along the road and seems to prefer our cat food to whatever he gets at home.

I’m worn out and I really don’t think I’m not cut out to be a doting grandparent.

Gold ring with a strange hallmark