Not as cuddly as they look, but genetically important. 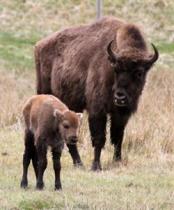 Glen Rosa, one of the Highland Wildlife Park bison is among the seven females selected for reintroduction in Romania.
In 1927 the European bison became extinct in the wild. Luckily, a number were kept in zoos and a coordinated approach to their management was started in 1932, with the first captive-bred bison reintroduced back into the wild in 1952. Reintroductions continue and in 2012, the total wild population had risen to over 3,000. The bison is not out of the woods yet, but work is continuing to save this magnificent beast for future generations.

(No pics on the net definitely of Glen Rosa, but I found this nice one of an un-named mother and calf)

We see a lot of them when we are Stateside,depending where we are of course!
Marvellous beasts and the wee ones are sweet, usually ginger coloured.

Remember this time last year we at Teddy Roosevelt Park, North Dakota and at the visitors centre we were able to drive right amongst them!

Lovely chunky beasts. The European ones are a different species to the Americans, but can interbreed. They are very similar, but have some differences.
1) On average taller than American bison, and have longer legs.
2) Browse more, and graze less, as their necks are set differently.
3) Nose set further forward than the forehead when the neck is in a neutral position.
4) Body less hairy, though its tail is hairier.
5) Horns point more forward, making them better at fighting with interlocking horns, like domestic cattle, unlike the American bison, which favours charging.
6) Less tameable than their American cousins, and breed with domestic cattle less readily.

Super picture of a Mother and her Baby.

Where do I draw the line..

Who will be ordering one of these ?

How many do you have?