We have grey squirrel families in our garden and they're interesting to watch. I'd only seen red ones as a child - just like Squirrel Nutkin, only with a tail!!! Now they are really cute and I do hope they make a comeback.

I understand why people like and support pine martens, and this latest news will help the red squirrels enormously, which can only be a good thing.

However, I have kept my own free range hens for quarter of a century but no longer as a pine marten got into the hen house at night and killed all but two (who had stayed out). It ate half of one but killed all those trapped in the henhouse and there was evidence of them battering themselves against the netting to escape over a long period.

The sight of my beautiful - and mostly elderly - chickens haunts me.

The unpredated pine martens, who have spread rapidly through the glen, are not short of other sources of food, but as wild animals they know no different.

There have never been grey squirrels in this area.

Thankfully there are only red squirrels where I live - long may that be so! I've only ever seen a pine marten once but it's great to see they are having a resurgence, too.

When you introduce a new species a frequent problem is that they leave behind in their native land all the predators and problems that would have kept them in balance with others in their new home.

Now that the pine martens are making a comeback after many years of being considered vermin by gamekeepers, it seels that grey squirrels are meeting their nemesis. It will be decades, though, before the pine martens spread into all areas, so we should not stop discouraging greys and helping reds all we can.

Greys are cute, but reds are native and cuter - and under threat from the more successful usurpers, who eat a wider selection of foods and can have several litters a year, with more kits in each litter. Greys also carry squirrel pox, which is fatal to reds.

That sounds like good news for our native species. 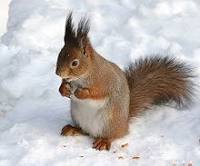 Grey squirrels are an introduced species and are still naive about predator pine martens. The grey squirrels are easier to catch than native red ones - so in areas where the pine marten numbers are recovering the grey population goes down while the red thrives.

New items of clothing ! Do you wash before wearing?