Ooh wow just been in the garden and had pipistrelle and a larger bat flying around,inches from my face..awesome

I have a maternity colony of pipistrelles in my roof every summer. They occasionally find their way into the house. They are interesting little things.

We used to have the same MiniMoon. We used to keep records of the number flying out every evening and send them to the Bat Conservation group - up to about 190 sometimes! Sitting out on a summer evening with a glass of wine and a note pad was lovely! We too had some in the house and yes they are fascinating. Sadly after having to repair the boards on the eaves they never came back. (We had permission and did it after they had gone for the winter. ) I miss them but still go out and see many of them flying around.

We have a pair of bats which zoom round and round the tree outside my flat for a couple of hours each night.

Two summers ago I was woken by my blackout blind rattling. I thought a breeze had come up in the night so stumbled out of bed, reached under the blind and shut the window without switching on the light. The blind continued to rattle so I put on the light and let the blind up ..... and was attacked by a bat which frightened the life out of me. It kept swooping at me and first instinct was to run out onto the landing and shut the door. My heart was pounding to such a degree that I thought I was going to have an asthma or heart attack. I couldn't get my breath.

Then I realised that I had shut the windows so the bat couldn't get out now, and had to pluck up my courage to go back into the room to open them. The bat kept swooping at me and I was having to flap one arm to fight it off while struggling to get the window open .... then ran onto the landing again.

Meanwhile the bat just kept swooping round and round. I stood on the landing for 20 mins, occasionally peeping round the door, and still it wouldn't leave. Then suddenly all went quiet. I cautiously opened the bedroom door - nothing. Thought "Thank God" and closed the window.

As I closed it, the bat suddenly appeared from nowhere (possibly it was hanging in my dressinggown which is a dark colour and good camouflage) and began attacking me again.

I was terrified, and still traumatised 2 years later, so I close all my windows at dusk, which has been a nightmare in this recent heatwave, but the Bat Society say there's a roost near here and I'm afraid of one coming back again. The thought that it was swooping round my bed while I was asleep is too horrendous.

My bat was quite big because initially I thought it was a blackbird.

Oh dear Sparklefizzthe poor bat was probably as terrified as you were...

Sparklefizz Where are you? If you are in Britain, that bat wasn't attacking you! We don't have any aggressive bats which attack people, and not even any large bats. They are all quite small, about the size of a mouse with wings.

It has radar, so if you had just opened the window gently and without screeching and flailing about it would have known where you were, known that the window was open and gone out soon as it could. It was trapped and frightened and you were paicking and flapping about so it couldn't get a fix on where you were and avoid you.

Probably a young one that had lost its way and come in by mistake. Poor little thing (the bat, not you)

Elegran Sorry but you are wrong and very judgmental, and you have no idea what it was like to be woken from a deep sleep at about 3am, so please don't feel able to criticise!

I am in the UK, and like I said I initially thought it was a blackbird so it was not tiny. Alcathoe and Barbastelle bats in the UK have a wingspan of 20 - 27 cm. I don't call that small. The Noctule bat has a wingspan of up to 46 cm but that one is fairly rare, I admit. All are found in the UK though.

I am not a screechy person so did not utter a sound. Whatever gave you that idea??? You are making assumptions.

The window was open before I even woke up and heard it banging against the blackout blind, so if it was that easy, it would have gone straight out again. I reopened the windows and stood on the landing for 20 minutes (I timed it) and still the bat did not fly out. It just circled round and round the bedroom - I could hear it and I opened the door to check every so often. Clearly you did not read my post properly Elegran or understand it.

I did not take it personally when it kept dive-bombing me. I knew it was panicking but I did not want it to get tangled up in my hair! I know someone who has experienced that.

Sorry, Sparklefizz I wasn't there and didn't see, but a common reaction to a bat in the room is to scream and wave the arms around - very disorienting to a creature navigating by radar and expecting to be among trees, not windmills. I have a lot of sympathy with the bat.

I have been told of bats clinging to curtains and being battered to death for just sitting there, too.

We have bats that fly around in spring and summer. I'm pretty sure they don't roost in our house but live in some tall old trees nearby. I love to see them.

A few years ago Dh and I stopped overnight at a travelodge on the M6. It was very hot and the windows were open. Suddenly I was aware there was something swooping round the room, which I thought was a gigantic moth but then I twigged it was a bat.

It wouldn't leave so I went to get the manager. On my way to reception there are several bats in the corridor, presumably having come in via an open fire door.

The manager said he'd never had to catch a bat before but he bravely extracted it from the uplighter where it had come to rest, using a towel, and released it outside.

We decided to sleep with the window closed despite the heat, as we didn't fancy a repeat performance!

Too many birds living in the many trees here.
There are lots of ringed doves that seem to think the top of the open window is an extra perch.

They sit there and look in the house.
One hovered in the open window recently weighing up the bedroom.

We were having some work done on our utility room and the workman threw a brick onto the patio and then noticed a bat attached to it! He was worried that he could have hurt it and also looked at some boxed in pipes and wondered if there were hundreds more in there!

I phoned the ranger in the local woods (a bat expert) and she came round, bringing a small box. She opened up the bat's wings and checked him over. He seemed to be all right so she said to keep him in the box until dark, put him in one hand and stroke him very gently with the other hand until he flew away. He was a young pipistrelle and she thought he would have been on his own, due to the time of year, and that he would find somewhere else to live.

When my husband came in from work I told him he had a job to do and he managed but the bat left a message in his hand.

I love bats. They're fascinating.

When we lived in SA, where concrete garden walls are popular, the vertical white, chalky streaks** on the walls meant a bat's radar had alerted it to an obstacle at the last possible moment! We had loads and loads of fruit bats in the garden every night at sunset.

Yes Grannyknot, we have seen fruit bats when on holiday in Goa and Sri Lanka and they are huge compared to our little pipistrelles. Fascinating although I understand the locals may not like the fruit bats so much as they eat the fruit.

We have bats, they’re fascinating. We bought a bat detector, as small box that magnifies their communication sounds. Easy type of bat makes a different sound so you can identify them.
We have pipistrelles and horseshoe bats. I can appreciate that some people find them alarming. 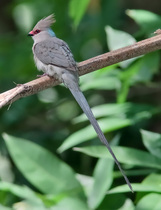 Liz usually in the hot countries, there's enough fruit for man and beast

...between the mousebirds during the day and the fruit bats at dusk, we had to keep a careful eye on the any ripening paw-paw in order to get to it first.

The mousebird is lovely so thank you for showing us the photograph. I had not heard of them before.

Thanks, Liz. I've just made myself "homesick" - not sure I can say that after 18 years in the UK!

How to let go of my adult children