A post that should, perhaps, be made in a Feminist section if only we had one.

I came across this in the archives of Radio 4’s Great Lives - an animated and engaging discussion between host Matthew Parris, actress Maxine Peake and historian Helen Antrobus from the People’s History Museum of Manchester.

Ellen Wilkinson is regarded as one of the most important figures in the history of British radical left politics. Her prominent role in the Jarrow March, the introduction of free school milk during her tenure as Minister for Education and to allow women to serve as police officers (three of the things discussed in the programme) among her many achievements.

The Woman's Leader described her as a vigorous, uncompromising feminist and an exceedingly tenacious, forcible and hard-headed politician.

A novelist too. You might know her from her novel, The Division Bell Mystery, set in the House of Commons which was published in 1932.

One of those programmes which makes me want to read and discover more. 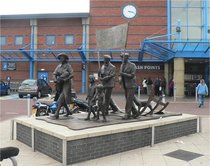 There is a statue to the Jarrow Crusade outside a supermarket in Jarrow. You can read about "Red Ellen" here www.historyanswers.co.uk/people-politics/ellen-wilkinson-suffragette-firebrand-and-hero-of-the-jarrow-crusade/
If you are interested in radical women Margaret Bondfield is another strong woman.

thanks for that. I shall listen.

I enjoy these programmes, and learn all sorts of facts about all sorts of people, some great, some not so.
I would not put this on a feminist thread; better to put Ellen Wilkinson under Great Lives rather than attempting to pigeonhole her; reach a wider audience that way.

Thanks for the link Early a very interesting discussion. Ellen isn't forgotten in the North East.

To my shame I don't even think I've heard of this lady. What a character. I listened to the full broadcast and found it thoroughly inspirational. Thank you for sharing.