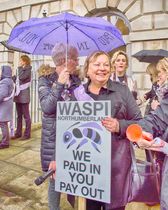 As many of you will already know from the various discussions we've had on the subject, WASPI is a campaigning group representing almost 3.5 million women born in the 1950s who have been negatively impacted by the lack of notification of the increases in their State Pension age.

WASPI is campaigning to end the huge financial difficulties suffered by this group of women because of the way the changes in the 1995 and 2011 Pension Acts were implemented. Successive Governments did not give the women affected by these changes sufficient notice that their State Pension age would be increasing, meaning that WASPI women have had no time to put in place alternative financial arrangements to see them through to the new state retirement age. Some women have lost as much as £45,000.

Founded by just five ordinary women in 2015, the WASPI movement has grown and now has over 70,000 supporters and 140 local groups across the UK. WASPI has secured support from the Labour, SNP, DUP and Women and Equalities parties and has raised £100,000 through CrowdJustice to fund an initial legal campaign.

Jane Cowley is Communications and PR Director for WASPI and has directed the Women Against State Pension Inequality Campaign since 2016. Like so many WASPI women, Jane heard in 2011, only after she had taken early retirement, that she would not receive her pension until she was nearly 66.

If you would like to ask Jane about any aspect of WASPI's work, aims and/or anything else to do with pension inequality, simply add your question to this thread before Monday, 25 September.

Very confused since Carolyn Harris's latest efforts to help. Is this now just for women born 1953 or earlier? I am 63 and redundant 3 years ago. Unable to get another job though qualified, I got only 6m JSA and am now reliant on my husband's pension. NO income of my own for another 2.5 years, after 45 years of work. Disgusting to be abandoned by Government to life with no independence or self respect.

Are WASPI also highlighting the fact that the number of qualifying years has also increased from 30 to 35. So that while we thought we had enough years to get the full pension if we had 30 years, we then found out we had to pay extra?

GranJan I'm in the same position, I was born '54. Stopped work at 58 for various reasons. I don't get anything as I don't want to be looking for work.

I'd like to say that if it hadn't ben highlighted by Mhairi Black of the SNP and she KEPT it in the media there would probably be no WASPI group .Mhairi has fought for us 1950's women tirelessly and I for one would like to see her get the credit she's due 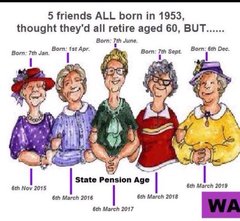 Through Twitter, Mhairi Black's contribution has been given much credit. Many other MPs and public figures have also been very supportive.

I'm 55, not in the best of health and feel like I will be working until I drop dead. The goal posts are forever moving. My husband is 10 years older than me and we hoped he could work until 70 and we could retire together when I was 60. Sadly no longer to be with my projected retirement age now set st 67.5. It's not fair .

I will finally receive my pension from 6th November, but not the full pension as I too got caught out by the qualifying years being increased from 30 to 35 - as I'm no longer working I didn't have the wherewithal to make up the shortfall in contributions. The cartoon above shows just how iniquitous the revised system is.

The Waspi website has letter templates to challenge the DWP, regarding the lack of information when the SPA was hiked up. I've sent four letters now and my case is being reviewed by and Independent Case Examiner.

What has happened to the legal case?

Is Labour supporting all 50's women. Dawn Butler said in an article on 11th September

I have heard the wonderful Mhairi Black speak at both national WASPI demos and each time she described how she took up the cause after meeting the WASPI member who came to see her at her first surgery. WASPI was founded before Mhairi was elected and I'm sure she'd be the last person to want to take credit away from the founders.

And you're right, Hm999, many supporters from all parties have worked tirelessly behind the scenes. I'm sure I heard that the All Party Parliamentary Group supporting WASPI is the largest ever assembled, and still growing. Your graphic clearly highlights the unfairness of the situation - for someone to get their pension nearly three and a half years later than a friend born in the same year is clearly unjustifiable.

YES what has happened to the legal case nobody answers that question when it is asked.

I am in the same position I was born in 54 and worked from age 16, I now feel that we are working longer and the youngsters are staying on at college till 18 then on to Uni in some cases until 23/25. I had done 10 years work and paid into the system but cannot get any help and unfortunately unemployed at present and due to age feel that I cannot get a job in office admin/reception work as they want younger people that are quicker at learning new things and my looks are not like a 25 year old. Feeling ready to retire and enjoy life while I still have energy, looking at my husband and how he is deteriorating rapidly through diabetes and other health problems is also wearing me down.

susie22 So far, for the legal case, all I can find is that the law firm engaged, Bindmans, sent a letter of complaint to the Damien Green in March this year. There are updates on the crowdfunding page.
www.crowdjustice.com/case/waspi/
The latest statement seems to focus on maladministration.

I am now about to send my 4th letter from the templates on the WASPI website. This is to the ICE (Independant Case Examiner).

I know a lady whose birthdate was only 3 months before mine, yet she received her SP November 2016, 16 months before I do! We need to keep the pressure on!

I am one of the lucky ones who was born before the WASPI dates but I would like to support the campaign. Is there a legal challenge being made and if so is there anywhere I can contribute?

susie22 this is what she told me. However, you are getting your SP 8 months before I do, despite being only 2 months older!

This inequality in the rise and the fact most of the 50's ladies were not informed in plenty of time is the campaign WASPI is fighting for.

The graph Hm999 posted above shows the dates for some of the women born in your year.

So many 1950s women have researched the background of the baffling timetable and found statements by Ministers and advisory boards. Waspi Board members don't seem to use this information. Why not pass it along to coordinators and Bindmans ?

I'm a 1955 birth. Not only will I now not get my pension until I'm 66, I've just found out that, when I do, it won't be the full pension. Why? Because my employer opted out - I have no recollection of having been notified of this. Who was my employer? - The Government!! So, despite having 40 full qualifying years, I won't get what I thought I would get. Maybe I should have been more on the case but I was bringing up three children single handed and working full time - so not a lot of spare energy for checking such things.

I can't get my head round this. My birthdate is Sept 1953 and I get my pension next month - just started the claim for it.