We've got best Christmas reads for the grown-ups...but what about the younger members of the family? Would we forget them? Of COURSE not. So now <ta-da> a page just for them and a round-up of some of the best books for kids of all ages, from toddlers to teens. 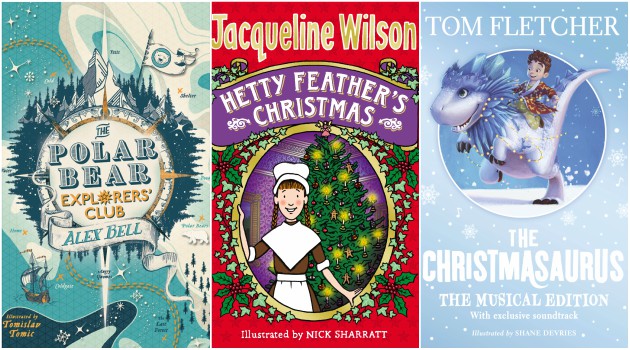 The Polar Bear Explorers' Club - Alex Bell. Illustrated by Tomislav Tomic. Join Stella Starflake Pearl and her three fellow explorers as they trek across the snowy Icelands and come face-to-face with frost fairies, snow queens, outlaw hideouts, unicorns, pygmy dinosaurs and carnivorous cabbages... But when they get separated from their expedition can they cross the frozen wilderness and live to tell the tale?

Hetty Feather's Christmas - Jaqueline Wilson. Illustrated by Nick Sharratt. An unexpected gift leads to trouble for Hetty on Christmas Day at the Foundling Hospital, and the dreaded Matron Bottomly is delighted to have an excuse to exclude Hetty from the festive celebrations. Poor Hetty is distraught – but just when it seems that all is lost, a dear friend arrives to whisk her away for a Christmas unlike any other...

The Christmasaurus: The Musical Edition (with exclusive soundtrack) - Tom Fletcher. Illustrated by Shane Devries. This is a story about a boy named William Trundle and a dinosaur, the Christmasaurus. It's about how they meet one Christmas Eve and have an extraordinary adventure. It's about friendship and family, sleigh bells and Santa, singing elves and flying reindeer, music and magic. It's about discovering your heart's true desire, and learning that the impossible might just be possible... (Includes 14 track CD) 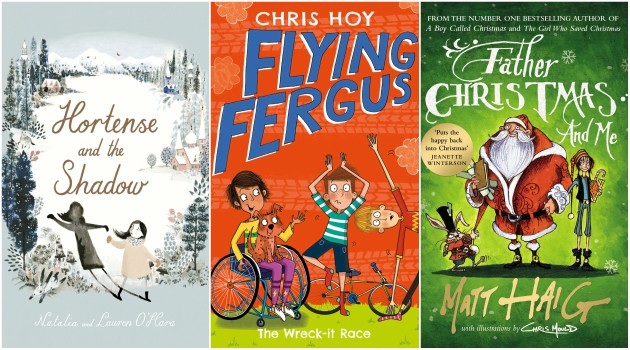 Hortense and the Shadow - Natalia and Lauren O'Hara. "Through the dark and wolfish woods, through the white and silent snow, lived a small girl called Hortense. Though kind and brave, she was sad as an owl because of one thing... Hortense hated her shadow." A beautifully illustrated dark fairy tale that will remind you of the fables you read as a child.

Flying Fergus: The Wreck-it Race - Chris Hoy. Illustrated by Clare Elsom. Fergus is sure their new coach is going to be his ultimate hero, cycle champ 'Spokes' Sullivan, so when Grandpa introduces Charlotte Campbell, the children are all less than impressed. Charlie is the successful captain of the Paralympic wheelchair basketball team and has some interesting training methods. Fergus is sure Charlie is off her rocker - how will this help them get faster for the International time trials?

Father Christmas and Me - Matt Haig. Illustrated by Chris Mould. It isn't always easy, growing up as a human in Elfhelm, even if your adoptive parents are the newly married Father Christmas and Mary Christmas. But when the jealous Easter Bunny and his rabbit army launch an attack to stop Christmas, it's up to Amelia, her new family and the elves to keep Christmas alive. Before it's too late. 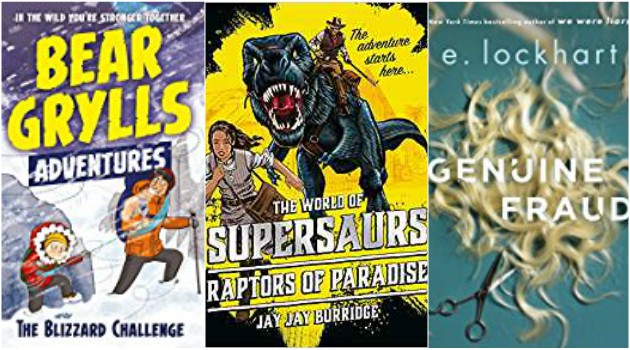 Bear Grylls Adventures: The Blizzard Challenge - Bear Grylls. Illustrated by Emma McCann. Olly isn't enjoying activity camp - he'd rather be at home in the warm and dry. But then he gets given a compass with a mysterious fifth direction. When he follows it, he's magically transported to a high mountain range where he meets survival expert Bear Grylls. With his help, Olly must learn to survive in sub-zero temperatures.

The World of Supersaurs: Raptors of Paradise - Jay Jay Burridge. Bea Kingsley lives in a world where dinosaurs have survived and evolved as supersaurs, living side-by-side with humans, sometimes in peace but often in conflict. When Bea's grandmother suddenly takes her on a trip to the remote Indonesian islands of Aru, Bea starts asking some big questions. But the more questions she asks, the more trouble she and her grandmother find themselves in.

Genuine Fraud - E. Lockhart. Imogen is a runaway heiress, an orphan, a cook, and a cheat. Jule is a fighter, a social chameleon, and an athlete.  An intense friendship. A disappearance. A murder, or maybe two.  A bad romance, or maybe three. Blunt objects, disguises, blood, and chocolate. A girl who refuses to give people what they want from her. A girl who refuses to be the person she once was. 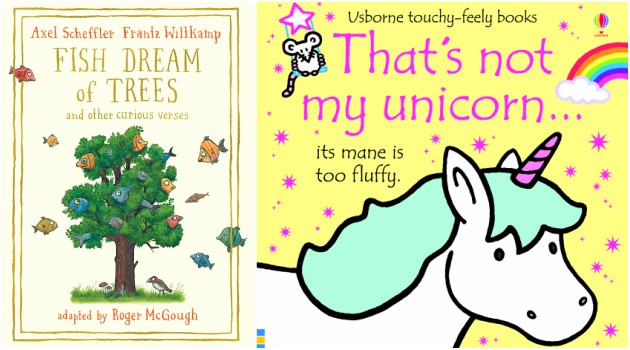 Fish Dream of Trees and other curious verses - Frantz Wiltkamp. Illustrated by Axel Scheffler. Scheffler's delightful artwork brings to life these playful and easily accessible poems by Frantz Wittkamp, wonderfully adapted from German to English by national treasure Roger McGough.There are lions and tigers and mice galore, not to mention a whole host of other bizarre and loveable creatures in this fully colour illustrated collection of short poems.

That's Not My Unicorn - Fiona Watt. Illustrated by Rachel Wells. The 50th title in the internationally best-selling That's not my... series. This sparkly, touchy-feely book features a magical unicorn to talk about, and a little white mouse to spot on every page. Babies and toddlers will love turning the pages and touching the textured patches as they try to find their unicorn. 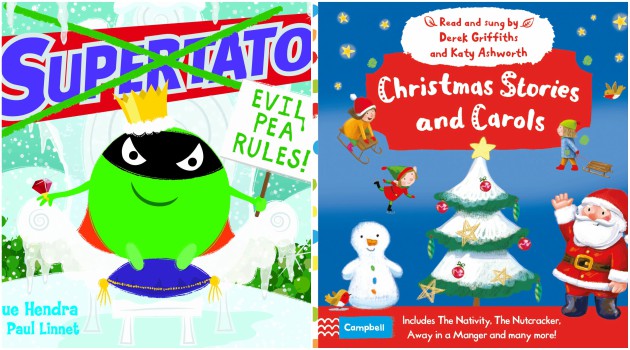 Supertato: Evil Pea Rules - Sue Hendra & Paul Linnet. It's all very well being a superhero and saving the day... but what if there was no one there to cause the chaos? To provide these heroes with their chances to shine? Would we even need superheroes?! Fortunately, this isn't something we will have to worry about any time soon. The Evil Pea is BACK! And this time he has his biggest, most dastardly plan yet to take over the supermarket…

Christmas Stories and Carols - read and sung by Derek Griffiths & Katy Ashworth. A wonderfully festive collection of favourite stories and carols for the whole family to enjoy over the Christmas holidays. Take a sleigh ride to the Snow Queen's palace, a trip on a donkey to Bethlehem or sing along with Good King Wenceslas. Added sound effects and music will keep children listening again and again, at home or in the car. 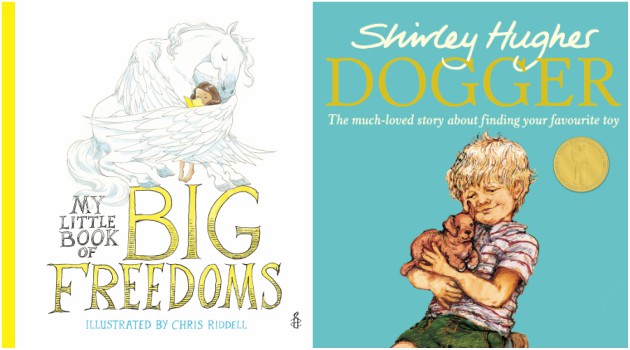 My Little Book of Big Freedoms - illustrated by Chris Riddell. We all want a good life, to have fun, to be safe, happy, and fulfilled. For this to happen, we need to look after each other and stand up for the basic human rights that we often take for granted. This book features 16 different freedoms, each accompanied by beautiful illustrations. It shows why our human rights are so important--they help to keep us safe. Every day.

Dogger - Shirley Hughes. A very special 40th anniversary edition of one of the nation's favourite stories. When Dave loses his favourite toy, Dogger, he is desolate. But then Dogger turns up at the school summer fair, and everything seems all right - until someone else buys him before Dave can get the money! This classic picture book tells the endearing story of how Dogger, the much loved toy dog, was lost and finally found again. 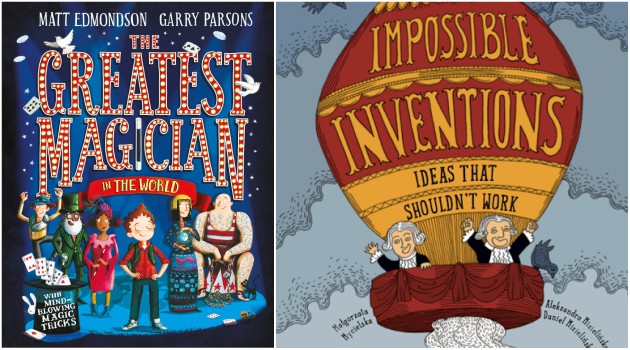 The Greatest Magician in the World - Matt Edmondson. Illustrated by Garry Parsons. Magic is in Elliot’s blood. His great grandfather had once been known as The Greatest Magician in the World and Elliot is desperate to follow in his footsteps. But it’s tricky when the only magic book in the library is missing half its pages, and there’s no one around to teach you... This interactive gift book features a witty and exciting quest story, a cast of personality-packed magicians and everything you need to perform seven jaw-dropping magic tricks.

Impossible Inventions: Ideas That Shouldn't Work - Magorzata Mycielska. When Leonardo da Vinci invented the tank, car, helicopter, glider, parachute, submarine, lift and telescope, over 500 years ago, he was considered a dreamer. Or even crazy. Today he is understood to be a genius, ahead of his time. This book collects ancient and modern inventions. Some are revolutionary, others comical, others were simply impossible. But each of them testifies to the extraordinary imaginations of their inventors. 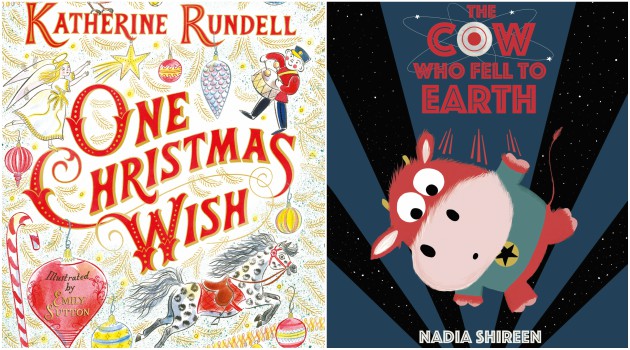 One Christmas Wish - Katherine Rundell. Illustrated by Emily Sutton. It's Christmas Eve and Theo - left at home with a babysitter - sees an odd-looking star out of his window and decides to make a wish. He wishes that he had some friends to keep him company. Moments later the Christmas decorations begin to disentangle themselves from the tree behind him, ready to wreak a little havoc...

The Cow Who Fell To Earth - Nadia Shireen. One night a star CRASH-LANDS right on top of a flock of bumbling sheep.bBut the star is not a star... It's a little lost cow. And all she can say is 'WOOOOOO'. How will she find her way home when nobody can understand a word she's saying? 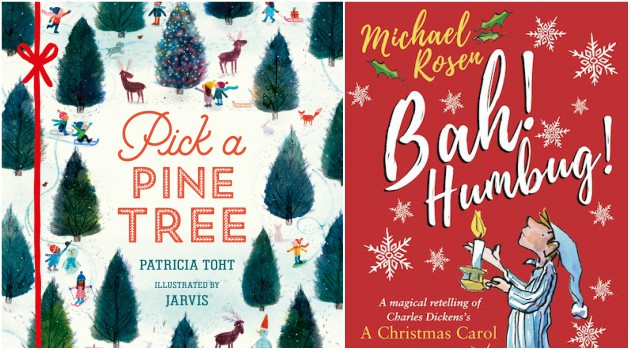 Pick a Pine Tree - Patricia Toht. Illustrated by Jarvis. Pick a pine tree from the lot – slim and tall, or short and squat! Long straight limbs or branches bent – Mmm! Just smell that piney scent! Brimming over with the excitement of being with family at the festive season, a gorgeously rhythmical narrative accompanied by warm, joyful art celebrates all the familiar rituals of decorating the tree – from digging out jam-packed boxes of trimmings, stringing tinsel, to, at last, turning on those twinkly fairy lights.

Bah! Humbug! - Michael Rosen. Illustrated by Tony Ross. An unforgettable retelling of Charles Dickens' beloved classic. In a school theatrical production of "A Christmas Carol", the boy who plays Scrooge is extra nervous because his very busy father is in the audience. However, it's likely his father won't stay for the duration, due to business. As always. Will the classic story's message of Christmas cheer and family love reach his father's distracted heart? 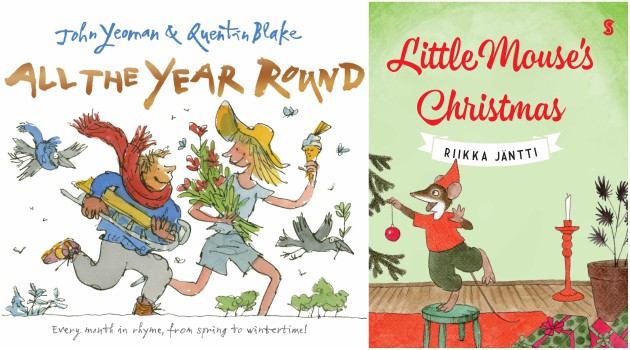 All the Year Round - John Yeoman. Illustrated by Quentin Blake. Discover the most entertaining way to spend the year: with a spot of spring cleaning (that ends in a mess), a summer picnic (invaded by ants), Halloween dress-up (or not, if you’re already scary) and the only thing to be done in December… 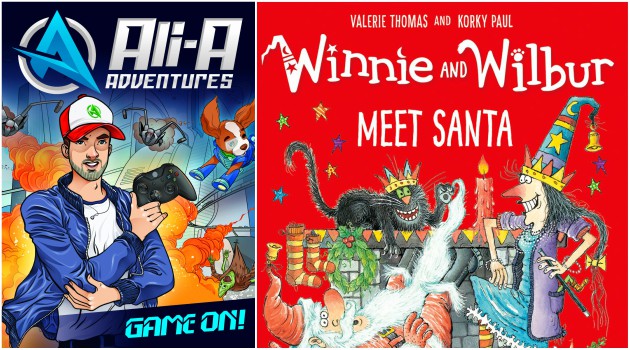 Ali-A Adventures: Game On! - Ali-A & Cavan Scott. Illustrated by Aleksandar Sotirovski. It's launch time for the hotly anticipated video game Alien Liberator 2, and who better to invite along than top gamer Ali-A? Ali is promised the biggest game launch ever - but what he doesn't count on is just how real the action is about to get! When a merciless band of aliens turns up to spoil the party, it's up to Ali to transform from gaming icon to real-life hero. Can he defeat the end-of-game boss and save the day?

Winnie and Wilbur Meet Santa - Valerie Thomas. Illustrated by Korky Paul. When Winnie and Wilbur write their letters to Santa they never imagine that they are actually going to meet him on Christmas Eve! After the crisis of Santa getting stuck in their chimney, Winnie and Wilbur join him on his sleigh in a desperate race against time to make sure children everywhere wake up to stockings filled with presents on Christmas morning. What a magical memorable night!