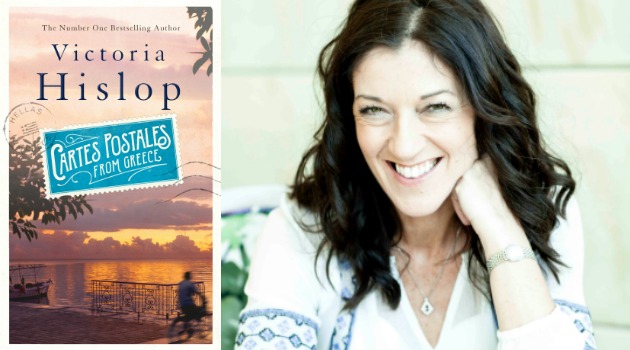 Our book club choice for this month is Cartes Postales from Greece, a delightful and original new book from Victoria Hislop, the multi-million-copy bestselling author of The Island and The Sunrise. The book is illustrated with photographs that make this journey around Greece, already alive in the imagination, linger forever in the mind.

Everywhere I stopped strangers talked to me, and many of them told me a story. Their voices poured into the void, filling the silence that you had left.

You will recognise some of the places in the stories from the postcards.

Who knows if the tales people told me are true or false? I suspect that some of them are complete fabrications, others are exaggerations – but perhaps some of them are real. You can decide.

Week after week, the postcards arrive, addressed to a name Ellie does not know, with no return address, each signed with an initial: A. With their bright skies, blue seas and alluring images of Greece, these cartes postales brighten her life. After six months, to her disappointment, they cease. But the montage she has created on the wall of her flat has cast a spell. She must see this country for herself. On the morning Ellie leaves for Athens, a notebook arrives. Its pages tell the story of a man's odyssey through Greece. Moving, surprising and sometimes dark, A's tale unfolds with the discovery not only of a culture, but also of a desire to live life to the full once more.

"Storytelling at its best and just like a tapestry, when each thread is sewn into place, so emerge the layers and history of relationships past and present" Sunday Express

Inspired by a visit to Spinalonga, the abandoned Greek leprosy colony, Victoria Hislop wrote The Island in 2005. It became an international bestseller and a 26-part Greek TV series. She was named Newcomer of the Year at the British Book Awards and is now an ambassador for Lepra. Her affection for the Mediterranean then took her to Spain, and in the number one bestseller The Return she wrote about the painful secrets of its civil war. In The Thread, Victoria returned to Greece to tell the turbulent tale of Thessaloniki and its people across the 20th century. Shortlisted for a British Book Award, it confirmed her reputation as an inspirational storyteller. It was followed by her much-admired Greece-set collection, The Last Dance and Other Stories. Her fourth novel, The Sunrise, was published to widespread acclaim, and was a Sunday Times number one bestseller. Victoria divides her time between England and Greece.

Cartes Postales from Greece is published by Headline Review and is available online and from all good booksellers. Please add your questions/comments to the thread by the end of November.

Thoughts on getting another dog at the age of 72.

To see nothing wrong in declining this wedding invitation