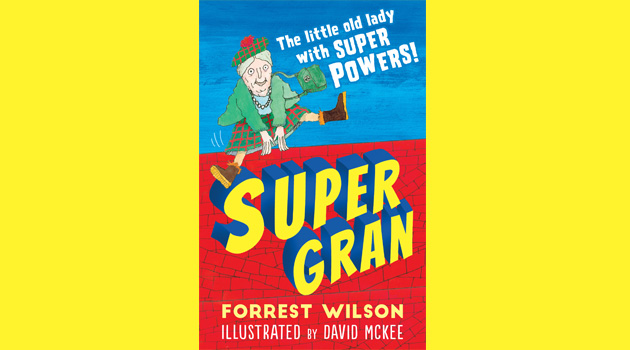 Our kids' book of the month is the fabulous reissue of a seventies classic, perfect for all nostalgic parents, grandparents and superhero-mad children alike! Super Gran, written by Forrest Wilson and illustrated by David McKee, is suitable for children aged 7-9.

She's back - the ordinary granny with extraordinary powers!

Granny Smith is an ordinary little old lady when something extraordinary happens. She is struck by rays from a super machine and becomes...Super Gran! Extra fast, strong, and with X-ray eyesight, Super Gran sets out with her grandson Willie and a girl called Edison to right all the wrongs in their town.

Along the way, Super Gran performs amazing feats that include foiling a bank robbery, but the super machine has been stolen by the inventor who has exceptionally bad plans for it. Can Super Gran and her loyal sidekicks save the day?

In the 1980s, Super Gran was a popular children's TV series, with a theme tune written and performed by Billy Connolly. And according to a recent poll in the Glasgow Herald, Super Gran is the seventh most influential Scottish figure of all time.

"A delightful page-turning adventure propelled by a gran with a difference" - Julia Eccleshare, Lovereading4Kids

"A superhero story with a twist, complete with retro black and white illustrations by David McKee. Take that, Avengers Assemble!" - WRD magazine

Forrest Wilson began his career with children's comics, and later moved on to short stories for magazines and radio. He is now a full-time writer, and lives in Scotland with his wife.

David McKee was born and brought up in South Devon, where he went from grammar school to Plymouth Art College. While still at college, he started selling one-off cartoons to newspapers and upon graduating, he began to contribute to such publications as Punch, Times Education Supplement and the Reader's Digest. His first book, Two Can Toucan was published in 1964 and since then he has written and illustrated numerous children's books. His books include the popular best-selling Elmer series, Not Now Bernard and King Rollo. David also illustrates for a number of other writers including Michael Bond's Paddington Bear.

Super Gran is published by Andersen Press and is available online and from all good booksellers. And we have 50 gorgeous copies to give away! See below to enter our draw.

HQ is it really acceptable ....

Selling the fur from dead koalas

What can we do to help?