Earthworms - and why you shouldn't dig your garden 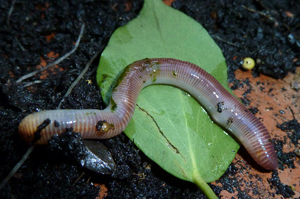 The no-dig garden relies on the hard work of the earthworm. (Why do lots of heavy toil when you can get nature to do it for you?) But to get those worms working, you have to create the right conditions. That means burying your garden in organic compost and manure to feed our wormy friends.

The earthworm - the most conspicuous and common worm we see wriggling away when we dig the soil to any depth - is officially known as lumbricus terrestris.

Earthworms keep the soil sweet; they are the no-dig garden's slimy and slithering fork and spade.

Charles Darwin’s last book was The Formation of Vegetable Mould through the Action of Worms (1881), which presented the first scientific analysis of the humble earthworm's contributions to soil fertility. Darwin writes in the conclusion that worms "have played a more important part in the history of the world than most persons would at first suppose”.

Earthworms form deep and temporary burrows and come to the surface to feed and excrete worm casts, pulling down leaves into the mouth of their burrows where they are left to decay before eaten. You can observe this in your garden by looking around on the soil surface; you might spot a few leaves stuck vertically into the ground. There is no way that the weight of the leaf could have pushed it into the soil surface. An earthworm has been about - grabbing the end of the leaf and pulling it into the mouth of its burrow. Sometimes you will see a group of small green twigs pulled in in the same fashion. Earthworms generally feed on plant material but have been known to eat dead insects and faeces.

This continual burrowing and eating provides much needed aeration and incorporates decomposed organic material to the top soil. This releases nitrogen and improves the soil. At the same time, the soil is loosened so that water and oxygen can penetrate.

The humble little earthworm, if carefully tended, will enable you to turn a patch of garden into the most productive ground. (This will take between six and sixteen months so requires some patience but you will see results and, at the very least, a good crop of potatoes fairly quickly.) Letting the worms do the work will also protect your back and arms and conserve your energy - always a good thing!

Unfortunately, having a no-dig garden doesn’t mean doing no work at all. But at least the work won't be the sort involved in double-digging for victory. The aim is to create a firm soil structure with a good ‘crumb’ - full of worms, air holes, fungi and nutrients.

A quick guide to a ‘No-Dig’ plot

Potatoes are a great crop in any first land clearance. They can be grown by planting the tubers in the very first mulch layer and then adding in more compost and mulches, including grass clippings and straw, as they sprout. Doing it this way you avoid having to dig them into the soil and you will have the new tubers growing in the material piled up around the plants.

Crop rotation is the key with no-dig gardens, as with all vegetable gardening. Root vegetables (such as carrots and parsnips) are excellent in helping break up the deeper layers of soil over time.