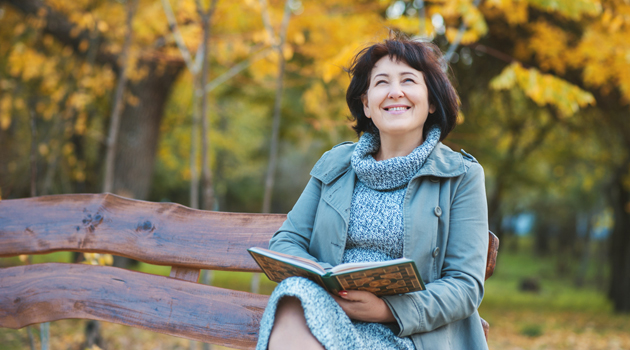 Books are terrific in helping us understand a place's history, character and charm - something that travel guides don't often accomplish. Whether you fancy a weekend break or a longer trip with your grandchildren, here are the best places to visit in the UK complete with a book (or three) that features the local area, from well-known literary masterpieces to more obscure holiday reads. So pack your bags, grab one of these fabulous titles and immerse yourself completely. 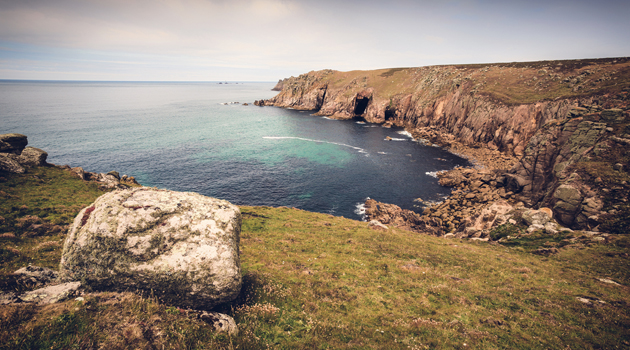 When you're coasting down the Cornish roads with a view like no other, what better than The Poldark Saga to really make you feel at home? Now thought of by many as Poldark County following Winston Graham's delicious series of historical novels and the even more delicious TV programme (and lead actor, may we add), Cornwall will leave you feeling relaxed, rejuvenated and inspired.

Top tip: You'll be able to discover Poldark's Cornwall through the gorgeous locations that played host to the BBC drama. Locations include Porthgwarra Cove, Charlestown and the National Trust-run Levant Mine. 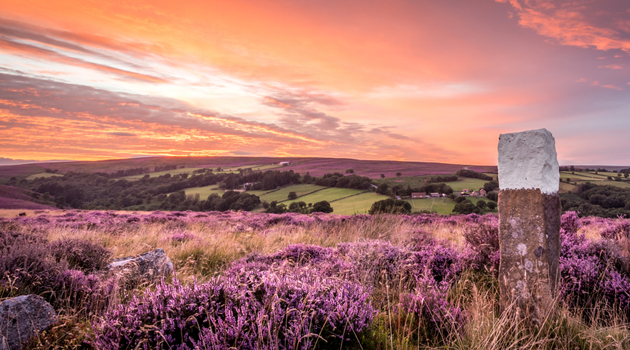 Who isn't prone to time warping themselves onto the Yorkshire Moors each time Catherine runs to meet Heathcliff in Wuthering Heights? Whether you fancy a stay in a small cottage, a long walk along the North York Moors to see the heather in late summer or a day sampling Yorkshire's local produce (there's nowt quite like Yorkshire ale now is there?), there's plenty to do in this beautiful county. If we hadn't hinted enough already, take along Wuthering Heights by Emily Brontë for a full Yorkshire experience.

Top tip: Don't miss out on a day trip to York, rich in ambience, culture and luscious gardens. 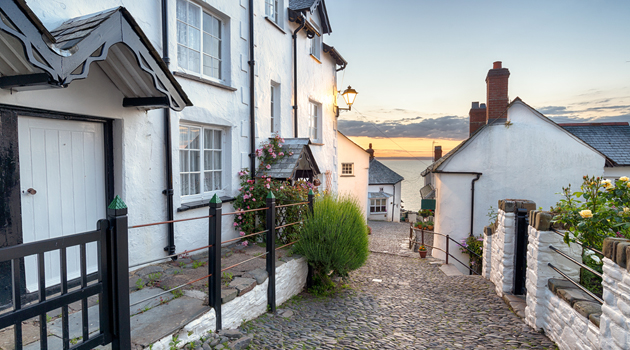 With a star-studded list of authors whose books feature the local area, it's no wonder Devon is such a sought-after haven. With family-friendly beaches, stunning views and vast array of countryside for those who love their walks, you won't be stuck for things to do in this attractive county. If you're a lover of crime novels and gripping murder mysteries, take along Agatha Christie's And Then There Were None or Arthur Conan Doyle's The Hound of the Baskervilles featuring the famous sleuth Sherlock Holmes. Or if you're partial to Victorian romances, grab a copy of Jane Austen's Sense and Sensibility for some downtime on the beach.

Top tip: If you're a real Agatha Christie fan, take a stroll along the Agatha Christie literary trail and discover the places that inspired some of the renouned settings in the Poirot and Miss Marple series. And if you're taking your grandchildren along for the weekend, keep them entertained with a bike ride in Exmoor National Park or a trip to the English Riviera Geopark for something a bit more unusual. 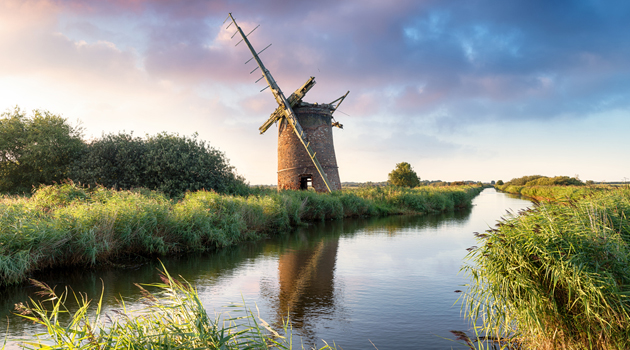 Not only was Stephen Fry brought up in this delightful county (a place that unsurprisingly holds a very special place in his heart), but it is also home to the remarkable Norfolk Broads. Take a boat from Wroxham and float leisurely down the river if you fancy a lazy afternoon - and make sure you take along Hilary Mantel's A Change of Climate or Graham Swift's Waterland for the ride. The following day, head into the beautiful Norwich city centre for culture, cobbled streets and a cracking portion of fish and chips.

Top tip: Try to catch the Norfolk and Norwich Festival in May, a fabulous celebration of all things art in one of the most cultural cities in the UK. 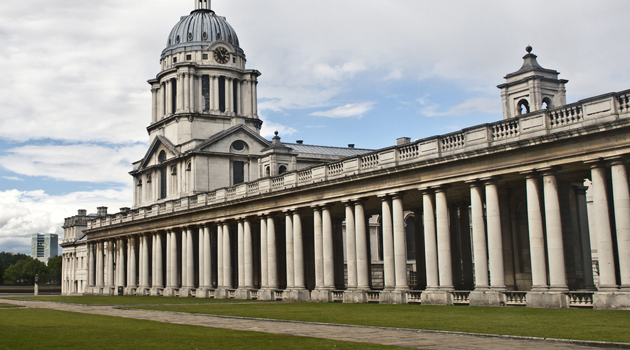 You'll be forgiven for thinking of London as that city with all the red buses and the big ferris wheel, but away from all the tourist traps, The Big Smoke has much to offer. For history enthusiasts and those with an interest in naval artifacts and exhibitions, head to Greenwich where you'll find the National Maritime Museum and all the information you'll ever need to know about British hero Horatio Nelson. Hop, skip and jump about half a mile down the road to the Royal Observatory, home of Greenwich Mean Time (GMT), and sit yourself on a nearby bench for a fantastic view over Greenwich Park. David Rooney's non-fiction book Ruth Belville: The Greenwich Time Lady is a must-read here.

Top tip: Head to Brick Lane for the bustling Sunday market - Monica Ali's Brick Lane may be a good companion as the street is at the centre of London's Bangladeshi community. For a grittier London, read Charles Dickens' Bleak House. Ah, the Lake District. Quite possibly one of the most popular destinations in the UK, inspiring numerous poets and writers such as William Wordsworth and Beatrix Potter, who spent many a holiday painting the glorious landscapes around her. Rent a cottage, soak up the atmosphere and visit the Lake District National Park for long, energising walks and a variety of fun activities. If you've got little'uns in tow, don't forget a copy of The Tale of Peter Rabbit (or Arthur Ransome's Swallows and Amazons for older grandchildren) and Wordsworth's Lyrical Ballads for yourself, a joint project he undertook with fellow Romantic poet Samuel Taylor Coleridge.

Top tip: Fancy venturing out a bit further? Pendle is just two hours away and is the ideal destination for those with a keen interest in history, from the Pendle Witches to the textiles industry. 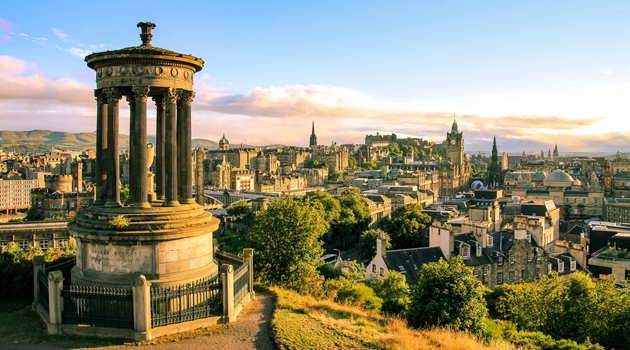 Our list would not be complete without including bonnie Edinburgh. As one of the most picturesque cities in the UK (and the first UNESCO City of Literature) it is not only a must-see, but THE place to soak up literary history. With a station named after Sir Walter Scott's Waverley novels and contemporary locals like Irvine Welsh and J.K. Rowling, who wrote most of her early Harry Potter novels at The Elephant Café, Edinburgh certainly has its charm. 'Hike' to the top of Arthur's Seat with Trainspotting in one hand and a camera in the other, explore the independent bookshops in The Grassmarket and head to the top of the Royal Mile to take in the architecture including Edinburgh Castle. Also read A Good Hanging by Ian Rankin or Alexander McCall Smith's 44 Scotland Street for a more intimate look into this Scottish city.

Top tip: Don't miss the Edinburgh Fringe Festival if you're heading there in August. The city is also only a short drive away from East Lothian, where you can visit Dunbar Castle and Aberlady Bay, which can be seen in Nigel Tranter's Footbridge to Enchantment.

Get the latest travel advice delivered straight to your inbox... A designated UNESCO World Heritage site, there's no UK city with quite as much je ne sais quoi as Bath (yes, it is twinned with the Aix-en-Provence in France). Not only did Jane Austen live in Bath for five years, but two of her most-loved novels, Northanger Abbey and Persuasion, were set here - it's only right that you should carry at least one of the two on any given visit to the city. Home to beautiful crescents, the famous Roman spas and a glittering array of stunning architecture, Bath truly is one of a kind. 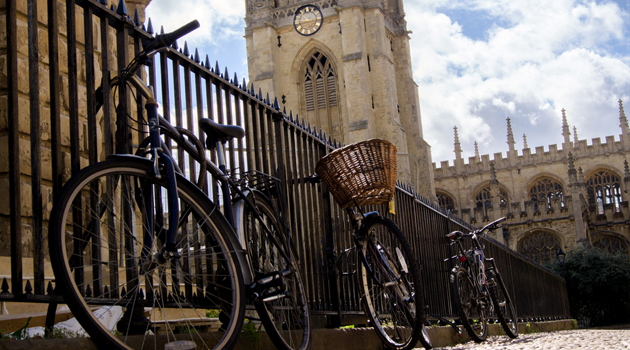 Home to the prestigious University of Oxford (who knew? <wink>) and numerous well-known landmarks including the Bodleian Library and Oxford Castle, Oxford is seeped in history, intellect and tradition, and features more than enough spires to last a lifetime. Take afternoon tea in one of Oxford's many exquisite tearooms, amble along the riverbank, and visit the Christ Church meadows which were inspiration for Lewis Carroll's Alice's Adventures in Wonderland and Through the Looking-Glass. Captivating Oxford reads include Evelyn Waugh's Brideshead Revisited, Val McDermid's Trick of the Dark and Colin Dexter's Last Bus to Woodstock, featuring the fabulously evasive Inspector Morse. For your older grandchildren, don't forget one of the books from Philip Pulman's His Dark Materials trilogy.

Top tip: Visit the locations used in the Harry Potter films or take an informative walking tour around the city. Ian Morson’s Falconer series will help you to delve deeply into medieval Oxford. 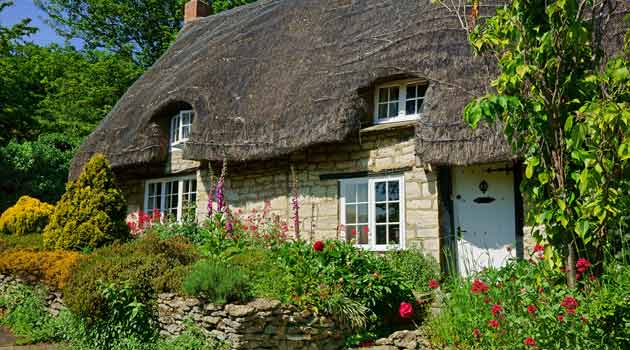 Lying across a number of counties including Gloucestershire and Oxfordshire, the Cotswolds is a favourite among UK travel-goers who want to relax and unwind. Walk around the beautiful Cotswolds villages made of Cotswold stone, soak up the fresh air along the rolling hills and farm fields or head to the delightful old market town of Chipping Campden. For any trip to the Cotswolds, be sure to pack M.C. Beaton's Agatha Raisin and the Quiche of Death or Jilly Cooper's Rivals and Riders.

Top tip: For elegance and pleasing architecture, head to nearby Cheltenham for the day. 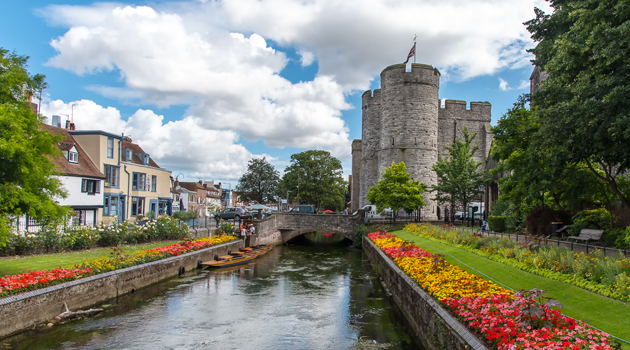 From the iconic White Cliffs of Dover to Canterbury Cathedral and the much-loved TV programme The Darling Buds of May (based on the novel of the same name), Kent is a county of many accomplishments. Dover and Canterbury are must-sees here, and while you're at it, pick up one of the titles from Lesley Cookman's Libby Sarjeant mystery series (Murder at the Monastery is a good shout).

Top tip: Walk along the seafront in Dover before taking a stroll along the cliffs to enjoy the stunning landscapes and the abundance of wildlife in the area. 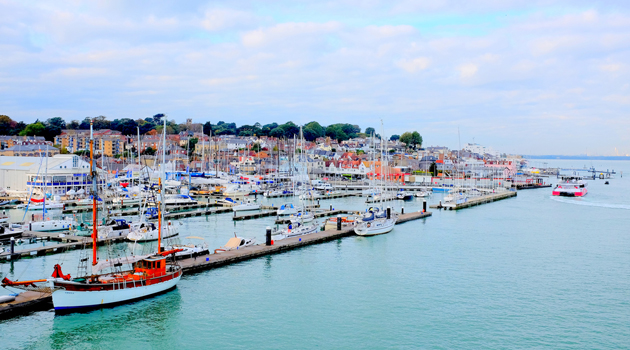 For coastal scenery and natural beauty, head to the Isle of Wight, a once extremely fashionable island and home to Queen Victoria and Prince Albert, Charles Dickens, John Keats and Victorian Poet Laureate Alfred, Lord Tennyson and his wife Emily. Head to Tennyson Down to see the Tennyson monument and take a walk near the poet's former residence, Farringford House, in Freshwater Bay with his poetry collection in hand.

Top tip: If you're an avid sailor, head to Cowes for the Cowes Week regatta from the 29 July to 5 August. For seasoned festival-goers, the Isle of Wight Festival is also a hit in summer. 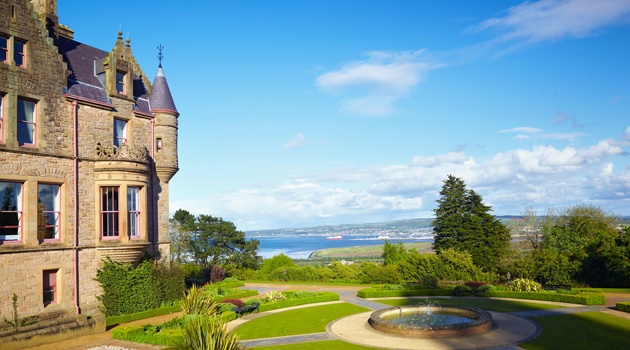 This Northern Irish capital is not one to miss. With a strong history marked by violence and conflict, there's a lot to learn about this fascinating city. Visit the beautiful Botanic Gardens or head to Cave Hill Country Park for ecotrails, Belfast Castle and incredible views over the city. For budding historians, the Titanic Belfast is another iconic attraction. Read Eureka Street by Robert McLiam Wilson for more on Northern Irish history and the IRA.

Top tip: For those who want to travel that little bit further, the Giant's Causeway is an hour and a half north of the city. 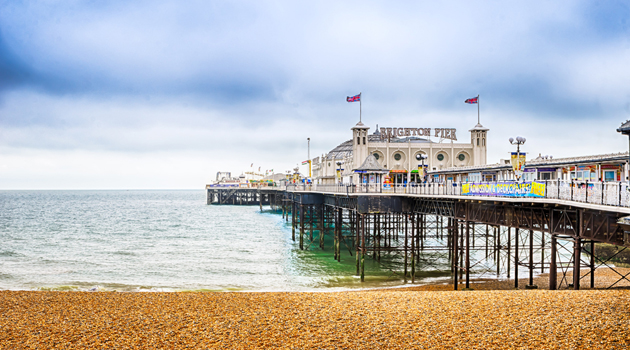 Oh! We do like to be beside the seaside... We do like to be beside the sea! What better than a stroll along the pier with a 99 on a cool summer's day? Thought of as a cultural hub and with one of the largest LGBTQ communities in the UK, this city has lots to offer, from tourist attractions to a buzzing nightlife. Take along Peter James' Dead Simple (part of the Roy Grace detective series) for some beach reading.

Top tip: Visit The Lanes for a spot of late morning shopping. 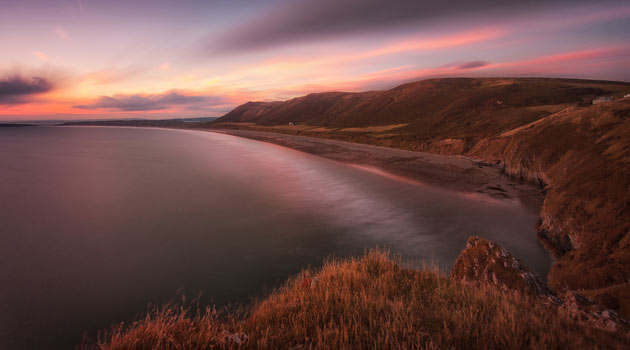 This lovely Welsh county was home to poet Dylan Thomas, who lived in Laugharne in the last few years of his life. Visit the remarkable Dylan Thomas Boathouse for afternoon tea with lovely views of the Taf estuary and the Gower or take the Dylan Thomas Trail to walk in the footsteps of the man himself. Take along The Collected Poems of Dylan Thomas for the journey.

Top tip: Drive for just over an hour to see Rhossili Bay to the west of Swansea, voted one of the best beaches in the UK, or go for a long walk in the nearby Brecon Beacons National Park.

For more on all things local, including events, find your Gransnet Local forum and connect with others in your area. And if you're after more brilliant reads, see our recommended reads list. 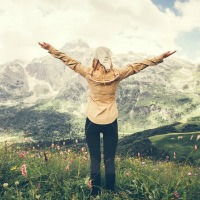 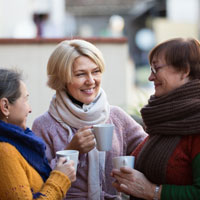