Childcare - is too much expected of grandparents?

One in five grandparents who provide childcare have given up work or reduced their working hours to do so, and 13% of grandparents say turning down childcare requests has led to arguments with or estrangement from their children or children-in-law.

A survey of over 1,600 Gransnet users has revealed the impacts of childcare commitments on grandparents in the UK, and the tensions that can arise within families as a result.

How often do grandparents provide childcare?

It is a one- or two-days-a-week commitment for most (56% of grandcarers), but 7% say they provide childcare five days a week.

Is there conflict over childcare expectations?

"I was unable [to do childcare] as my husband was dying. My daughter reported me to social services." - survey respondent

The demands of grandcaring and the needs of working parents lead to tensions and conflict in some families. 8% of grandparents surveyed said that their decision to turn down a childcare request from their child or child-in-law led to an argument or temporary breakdown in communication, with a further 5% saying the relationship had become permanently strained or that they were entirely estranged as a result.

Thankfully, 70% of those who had turned down a request said their children and children-in-law understood their reasons and were fine with it.

Are the parents to blame?

Parents’ timekeeping is one of the biggest gripes for grandcarers, with 24% saying that it causes tension, followed by the amount of screen time children are allowed, cited by 18%.

What else are grandparents helping out with?

It’s not just childcare that grandparents are helping out with, as 84% say they help financially with items including toys and games (42%), and clothes including school uniform (17%), coats (13%) and other clothing (37%). And a quarter (25%) help with holidays or have a savings account for them (23%).

Other expenses they say they help out with include speech therapy, school dinner money and even the parents’ mortgage.

Gransnet Editor Cari Rosen said: "It’s clear grandparents provide lots of valuable help to parents where they can. Gransnet users say that the trick to making this sort of childcare work is for everyone to be really clear about their expectations. Grandparents certainly shouldn’t be afraid to speak up if they realise they’ve taken on too much." 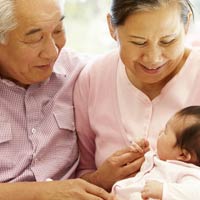 Most popular names for grandparents

Handling parenting styles of our 3 kids

Are you going abroad this year ?