What is it with people passing? Surely they have died.....is that too blunt for the news these days.

That word always makes me think of 'passing place' signs on narrow roads. Also Pass the Parcel. Always seems a mealy mouthed euphemism to me.

midgey I could not agree more- I hate that expression. Passing where is what I ask!

I think it's an American description.

My late MIL had a neighbour who was always 'loosing people'. One year it was particully bad where she 'lost' a lot of people.
On one visit to MIL another person was 'lost'. Now me and the OH have a very dark sense of humour and get the giggles. This was one such day and before one of spluttered I just 'had to go to the toilet' to try and control myself.

Has anyone seen the wonderful Jeanne Robertson's take on 'passing'? Very funny lady.

Ha ha petra To quote Oscar Wilde; "To lose one parent may be regarded as a misfortune; to lose both looks like carelessness".

I think that for media purposes it should always be the word 'died' but in private speech, if people prefer it then 'passed away ' is alright ( because it's their choice)
I always say died, not passed away, lost, or gone to their reward or anything else, but respect the right of others to say what comforts them.

Depends who says it - of someone says it of a loved one, then that is their choice. Not an expression I would choose myself though.

To use the term "lost" is a bit different to passed or died. When someone you love dies you feel you have "lost" them as a presence in your life.

'Passing' for dying sounds a bit euphemistic to my ears if used today, but it has a long and respectable history, e.g. the passing bell rung when someone has died (Dorothy L. Sayers' The Nine Tailors) and Tennyson's poem The Passing of Arthur in the Idylls of the King.

Is it not short for "passing over" as in "to the other side". "Passed away" is often used by medical people instead of "died" as the latter sounds quite harsh when you are giving sad news to someone. I think different words are fine when you adjust them to the person you are speaking to. If you know someone well then you would know which words to use to them.

Does it really matter what words people use to describe what happened? If it helps them come to terms with the death of a loved one then isn't that all that matters? Different people deal with things in different ways.

Yes cornergran it is thinking of the feelings of the bereaved that's important, as you and some others on this thread have said.

And as grumppa pointed our the term 'passing' has a long history of usage and is not a modern ones.

I think people in general used to be much more straightforward about death. We pussy-foot around the idea, let alone the fact, nowadays as if to talk about such a fact of life were somehow taboo.

We do our utmost to put it off. We struggle to make laws allowing people suffering horrendously to end their own lives when they choose. We think it's more importance to push death away than to try and end suffering. We confuse assisted suicide with euthanasia. 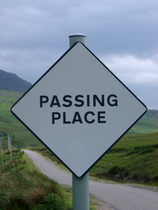 Getting worried now when I see these on remote country roads

Perhaps "passing" is a reference to ones soul passing to another place.

'Passed', to me, has religious overtones. It suggests, to me, a passing from a mortal coil to an immortal one, or something of that nature. Speaking of death, dying, of someone who has died, seems much more accepting of an end of an individual's (animal, plant, whatever) life. Which, to me, is what it is.

Before anyone thinks I'm being critical, read what I've said: I've talked about what certain expressions mean to me. I haven't mentioned anyone else. Other people can think, and say, what they like about death.

I'll continue to say that someone or something (like a tree, for instance) has died. Death gives life anyway. When you're as close to nature as I am, you see death as a giver of life to other organisms. See what I did there?

When my father died, I didn't want anyone to be 'tactical'. I just wanted them to know he had died. It's not cruel or lacking in 'tact' to say someone has died, or is dead.

"Tactical" or "tactful"?
These predictive keyboards!

Young people seem to think its the correct thing to say usually based on what they've seen on TV. Also use 'sorry for your loss' in a sort of garbled way. This is usually absolutely genuinely meant and they are trying to do the right thing. The media have a lot to answer for!

I too am uncomfortable with the euphemism 'pass away'. When my DH died, I made sure that I always used the word 'died' and still do when I have to explain that I am widowed. One of my daughters has recently started to use the 'pass' word which I really don't understand, being my progeny, but if that's how she feels.......... Probably she is surrounded by friends and colleagues who use that word