Next door neighbour pushing my fence panel over

My neighbour who i have lived next door to for 34 years is suddenly being very nasty, i have 2 large fence panels propped up at the top of my garden, cant fasten them to anything so propped up with wooden poles
The reason i did this was to stop my cats getting into their garden, as my now deceased Siamese once went over and got shouted at,so bought some panels off someone to try to stop this
All this nastiness started in October when i had a large fur tree cut down, [not all the way] as they said it was cutting their sunlight off,
However, when the man had finished my neighbour had a go at him for not cutting all their side off, although the highest branches were cut off,he would have probably had to go into their garden to do it,
As far as i knew he would cut all the way round, but apparently they only cut the top and the side of the persons who wanted it cut,so then she rang me and asked why i hadnt had their side cut too, i explained i i didnt know it wouldnt be, she said "its your bloody tree tell him to do it" of course it would have cost me an extra possibly £50 or more, so i told her if she wanted her side chopping she was welcome to do it, but i wasnt paying extra, so now this
I cant believe they are being so petty, i still have 3 cats who don;t venture out of my garden as they were house cats for a long time so don;t want to go away,they are all 10 years old
I have looked after their house when they have gone on holiday and done errands etc,they are both in their 80s now
I dont think i am being unreasonable in putting this fence panel back up every time it gets pushed down, it is not touching anything of theirs,as the fence originally between the houses is just wire and the posts are concrete, which is why i cant nail it up
All this was for their benefit originally
The houses are not private by the way but Housing association [sorry its so long]

Contact the housing association. Sounds like the neighbour has lost the plot. Have you asked her why she is doing it? Very strange behaviour.

Is there anyone who would fix the fence panels properly?

I mean, sink the fence poles into the ground and fill holes with concrete?

I would certainly contact the Housing Ass. and tell them the problem with the neighbours they just may have their own Supported Housing Officer them being the age they are.
It could also be the signs of dementia creeping up on them and they have forgotten how you have helped them in the past.

Probably would have been more neighbourly to have got the branches cut on their side too! They obviously think you should pay, especially when it’s your tree??
I know you don’t have to, but £50 is a small price to pay for harmony between neighbours.

I don't have neighbour problems but I am interested to know what a HousingvAssociation is and how it can sole neighbour disputes? Just curious, that's all .

I agree with glammanana. My first thought when I started reading the OP was whether the changes in your neighbour;s behaviour sprung from problems their age is causing them.

As the houses are HA houses I would immediately go and talk to them and describe the problem.

Are we now going to suspect all slightly grumpy oldies of being heading for dementia? Please not.

No we are not Gonegirl but it is sometimes the common denominator in cases like this,I don't comment often and try to put both sides equally I did not say all "grumpy old ladies are heading for dementia" at all just put a point forward which may be the problem,I won't bother again thank you very much.

I too was going to say the onset of dementia. Aren't we supposed to mellow and be more tolerant as we get older ? If not, then something's going wrong.
34 years is a long time to have been neighbours and if things are now going " amiss " I'd certainly question it.

CrazyH Housing Association is basically what used to be called Council Housing or social housing. You pay rent to them in the same way you would a private landlord.
They own the property and make the tenancy rules. The can be called upon to mediate in neighbours disputes.

Thanks Nina - yes, I know what council houses are....we had a big development of them near where I used to live , but wasn't sure about Housing Association houses. Thanks again.

If the tree is on 'your ' land.. ALL of it is YOUR responsibility... should have had it ALL chopped...

I too would suspect the neighbour is being unreasonable and turned nasty. She may be in pain?. It's often the case that it's not just one person getting the brunt of the bad temper so don't worry that you've done anything wrong.
I would definitely talk to someone at the HA . They will have dealt with neighbourhood disputes before.

I think it was a bit unreasonable not to have cut the tree fully back. If the tree is in your garden it is your responsibility to maintain, and cut it back. You are usually responsible for branches that encroach on others property. I would check your lease as it is likely that you are responsible for maintaining the garden and fencing. If they do cut it back themselves, I believe the law allows them to leave the debris on your side as it is your tree.

I don't understand how the height was reduced but not the branches on the neighbours side but I don't think she's being unreasonable to expect you to have asked them if they wanted their side done as well. I have a couple of large trees in my garden and get my son to prune the branches regularly and always ask next door if they want the branches their side removed or left. It's your tree and if they do cut the branches off themselves they have to give them to you and many neighbours just chuck them over the fence. It's not fair to expect people in their '80's to cut back your tree. Also are the fence panels just leaning against the wire fence, that's how it sounds, are they really being unreasonable to push them over or are they trying to hint they are dangerous and should be fixed properly. I have no idea about HA properties but those of us who own have to get a fencer in to sink the posts into the ground, concrete are best and the panels just slot into them. So that's your responsibility to even if it's just contacting the HA.

Are you sure the pushed them ? Maybe the stiff breezes we have been having blew them over , I would get them fixed

With hindsight it would probably have been better to have had the tree felled!

Talk to your housing association and do get someone to put up a proper fence, fixed to posts, if you can't do heavy work yourself.

Life is really to short to have this kind of nonsense with neighbours.

A fence won`t keep out a cat if it wants to go somewhere, they can jump quite high.

the cat next door climbs our 7ft brick wall !

Any road you need to get the fence fixed and possibly apologise over the tree. 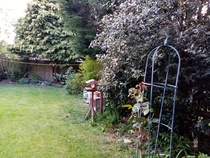 Thank you all for repliesthe man who cut tree was a council tree surgeon, he lives in my street and did it as a favour for me at a reduced price in his spare time,it still cost me £200,and before i had it cut i told them next door i was going to see about it,they asked me not to cut it right down as it gives us both some privacy
Also i didnt know that the tree should only be cut on my side as i was the one whose garden it is in, but the part that was cutting their light out has been chopped off,it was the top half, it wasnt affecting my light that way but was growing outwards towards my window, so was cutting my light out that way,so really for my own benefit i could have just had it trimmed back
I have no intention of paying more for their side to be cut,it is at the lower part of the tree and wont affect the light into their house or garden,
I am only on a state pension and they are much better off so could pay or have paid to have more off,i had no idea that by law i only had to cut my side,
As for the fence panel, he told me[ the husband ] that he had pushed the panel down on purpose as it was pushing on his fence, he hasnt even got a fence, it is plastic covered wire and on checking it the panel doesnt touch it at all
The cats i have now dont even attempt to go out of my garden, they are ragdolls and lazy laid back cats
As for putting the panels in properly it would be difficult,i have a small tree [a buddleia] that collapsed last year and it would need getting out of the way
If i remove the panels, the cats can easily get through his wire fence,as he calls it so i dont think i can win really
Anyway,the panels have been there for over 10 years
I have a similiar panel closer to the house, which i have fastened to the fence post in between the houses,he doesnt like that either, he says its fastened to his fence posts
The panel he pushed over are at the top of the garden and cant be seen by either of us from our window
I really think they ARE losing the plot, never had any problems before,he has walking difficulties, and i believe she has heart problems, only know that by someone else telling me,

I think whatever i do it wont please so the fence panel will stay where it is
A few years ago,i was thinking of downsizing and they said they hoped i wouldn;t as they didn;t want a family with kids, [her words]
Pics attachedm, view from my window, cant even see the fence, neither will they and view from the garden, with cut down tree

The large fir tree at the back is mine too, but the people over the back like it and dont want it down

Have you do you handle a situation like this?