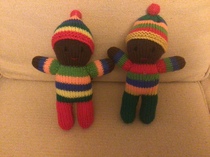 The free pattern is so much better than the one in the booklet I shelled out £7 for!!
I shall post the other two off as well, anyway.
(Doesn’t look like it in the pic, but the eyes do stand out.)

Yes. I hope they bring some comfort and pleasure.

I'm sure they will.

.... the little knitted hat given to my last grandchild in intensive care to keep them warm made me weep with gratitude.
Such a small thing - but in the strange twilight world of intensive care, it was a little bit of love and humanity.

I found the pattern online.

Are you going to make some, @Callistemon?

I did adapt the pattern slightly because of the stripes, i.e. an odd row more or less so they’d start on the right side. And used no. 10 needles instead of 11s, so they’d be a wee bit bigger. Plus didn’t bother with the scarf or the ‘buttons’, hardly needed with stripes.
Very easy though - even the sewing up wasn’t too much of a PITA!

even the sewing up wasn’t too much of a PITA!

I might but I've just started a poncho which has a long way to go!

How long to settle in a care home

Alan Bennett - a Marmite figure I know - on Radio 4