What goes around comes around

Chatting to my elder DS on the phone today, he mentioned that his eldest DS was doing gardening as a 'punishment' (eldest GS is 14). So I asked what he'd done. Apparently, his bedroom was in a terrible state, dirty clothes hidden in the wardrobe, under the bed etc. It was difficult - but I managed to keep a straight face! When I told DH, his comment was 'I remember when DS was 14, I don't think you could get in his bedroom!'. It's worth waiting for come-back time 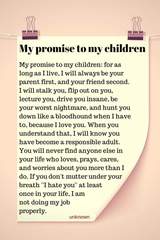 I a list on fb this morning with my D. She responded with "I'm so glad you didn't do any of this with me. We could always talk. I'm glad you are my mum, and I love you." I think she has forgotten the years between 13 and 18

Congratulations 'hildajenniJ*. I haven't worked out how to do that yet!

When my daughter was being a teenager, we let her paint her bedroom walls whatever hideous colour was her choice of the time[except black, I drew the line at black].
By 20, her choice had changed to magnolia!
Not quite the same as the above posts, but thought I would mention it anyway!

I am by nature a tidy/clean freak! My daughter, as a teenager, used to be untidy but only with clothes and make up and her bedroom would look as though an explosion had taken place when she was getting herself ready for a night out. She would then claim she didn't have time to clear it up as she was either rushing out or preparing a piece of work for Uni or heading out to part-time job. So yes...I cleared up the mess which was preferable to having to live with it. Now she has her own house every room is immaculate no matter how busy she is....guess it's just teenagers!

I clearly remember my brother's room during 60s/70s...purple walls adorned with Led Zeppelin/Pink Floyd/Deep Purple posters, old wine bottles with candle wax dripping down the sides, his collection of beer mats all strung together and hanging from the ceiling not to mention the fug of cigarette smoke which was disgusting. Everyone used to shout at him "KEEP THAT DOOR CLOSED"....again it's just teenagers!

Oh dear. My DDs house is absolutely immaculately neat, tidy and sparkling clean. A clear case of oppositional behaviour and the absolute opposite of our house when she was younger. Sigh

When my DD complains about her DDs being fussy about food, I tend to think - haha what were you like as a child? ( refusing to eat anything apart from peanut butter and cucumber sandwiches) I don't say anything obv....

Oh it is such fun, being able to bring up the past. GS was being told off because his school report said he was underachieving, from an old box I produced DS's school report for the same age- said exactly the same thing. DS grumpily said "You see I know what I'm talking about!"

My teenage grandchildren are much much better behaved than my teenage children were. My now grown up children would have heart attacks if they behaved like them at the same age. I don't know what that says about my parenting

we were remiiscing about some of the dreadful things my two did as teenagers last night - than DD1 and sil realised that was just a couple of years away - 'you wait, we saidk, you just wait ...'

Over lunch yesterday, I had a conversation with my son about the domestic issues he has with his two stepsons. One is at uni, but seems to come home regularly trailing large amounts of "stuff" relating to his course, which clutters up every conceivable space. They are seemingly both incapable of finding and loading the dishwasher, or of picking anything up. It drives him to distraction. Before he married their mum, he led a very ordered life - boarding school, a couple of college years when he lived at home, and then the RAF. While he as at home, he was always very tidy. I could only offer that his sister, in her early teens (horrendous) was exactly the same as his boys are now - I don't think I was allowed into her room until she left to go to uni. It was like opening an undiscovered tomb, except that, unlike Howard Carter, I couldn't say that it was "full of wonderful things" 😱!

Wow - the old wine bottles with wax running down them really took me back to the early 70's! I think it's a pity candles nowadays don't run, because those bottles looked really pretty.

My daughter was away last week. I couldn't stand looking at the state of her bedroom any longer so I fought my way in and cleaned it. Not only did I do that but I stripped the bed of tan stained sheets and went out and bought a new quilt and bedding.

I took photos for posterity. She did have the decency to say 'thanks mum'.

My son' s response when we even bothered to mention the mess in his room was, 'You should see my friends' rooms.' (A bit like, 'well I only killed one, small person'.)

He is now in his late twenties and still inclined to messiness, albeit on a less cataclysmic scale.

Yesterday two of his friends came round to help him add some computer units to his main computer set up. They had to wait until the operating system was loading so, in the meantime, they sorted out the 'chaotic corner' and put the boxes and unwanted items in the recycling bin.

Me; I see you tidied up then.
Son: No. We just sorted things out and binned the stuff I didn't need.
Me: That's tidying up, son.

He didn't think it was quite as hilarious as I did. It was made even better by the fact that the friends whose mess he cited as an excuse were the ones to help him. I have waited a long time for that 'gotcha!' moment.

None of my children were able to maintain particularly tidy rooms when they lived at home - and my second daughter had a room that I'll swear was a bio-health hazard. So how come they all live in immaculate houses now? My youngest son is at Uni and even when I call unexpectedly I can't catch him out; even his clothing is stored in his wardrobe neatly folded or hanging.

I remember my hubby getting so mad at the state of our daughter's room he started throwing things out of the window into the back garden! When he calmed down she got his sympathy by saying she had no storage space. He felt guilty so went and bought a new set of bedroom furniture. It didn't improve her tidiness at all! Fast forward, she now has a four year old daughter who is really messy! So, what goes around, comes around.

I have a friend of my daughter to thnk for her eventual tidiness.
She was doing a live-in job with her, and they had to share a tiny space. The friend was very neat and when she had tidied up her half, she started tidying up my daughter's. My DD was ashamed, and from that time onwards was tidy.

When DS went off to uni and we got into his room we unearthed much of the cutlery and dishes we had been missing complete with growths of different hues!

His wife has tamed him pretty well but the DSs are growing fast and being almost as messy as their dad. When DS comments then DH says, "Give them time, in our experience they will only reach your standards by the time that they go off to uni or leave home!" As others have said it is funny to watch the merry go round!

I really feel for my poor, poor DDIL!

I hardly ventured into my daughters room when she was a teenager. She used to have a massive clear out of clutter every couple of months or so, and several black binliners used to come bowling down the stairs, and I would be invited in when she had finished to say how wonderful it looked!

She never bothered with the rest of the house. I remember once saying she should do more housework, and her reply was "that's what you're there for"!! Now she is in her forties with a teenage daughter of her own..........and a very tidy home. I can't get revenge as for the most part her daughter is by nature a tidy person.

Our grandson (2), is a compulsive tidier. he goes round putting stuff away. Sounds fine, but that include things you are using. I somehow doubt that this trait will continue much longer.

I let my son paint his bedroom black! It was like the black hole of Calcutta, whatever that was. I had to paint it before we sold the house. It took at least three coats. I must remind him of that soon !

My daughter's room was always a mess make up dropped on the carpet clothiers shoved in the wardrobe. My son however had the box room which you often get in a 3 bed house but he was exceptionally tidy,I suppose it was because the room was small and if he didn't clear up he would fall over it. When my daughter moved out and went to live with her boyfriend she found it really hard at first to keep the house tidy but in the end she learnt to keep it clean and tidy my son however went to live in a flat and it was always tidy, funny that think he took after me I very tidy

No Joyfully! We did let her have a black carpet however, which I still have to look at most days.

My daughters room looked like it had been burgled, clothes hanging out of drawers etc.

Unfortunately, now she's an adult, she does t seem to have changed much.

I don't understand it as I am a very tidy person myself.

Gold ring with a strange hallmark

Platinum pudding - is this a joke?