And a Happy St George's Day to you and all Gransnetters!

Happy St George's day from me, too. 🙂

Where is the English emogi HQ 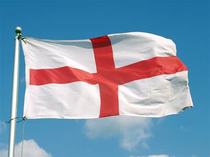 Happy St George's Day. Good to be able to fly the flag without being deemed racist or a football supporter, sad that our national flag has been hijacked in this way (and I am half Scots!)

BTW it is next Monday ;)

Happy St George's day.
This set me wondering about a rhyme my mum said she chanted as a child. Somehow I always associated it with St George's day but it was actually Royal Oak Day
"Royal Oak Day
29th May
If you won't give us a holiday
We'll all run away"
I Googled it and the day stopped being a holiday in 1860s so why was my mum chanting this 70 years later? (I always thought it was 24th May as well but that's what memory does!)

My late father was born on 23rd April and always said his parents called him George because of that. They hadn't chosen a name and the midwife suggested calling him after the saint. However, having studied his family tree, there seem to have been several Georges.

St George was not English but of Greek heritage. A Roman soldier in the Praetorian Guard of emperor Diocletian.
George was condemned to death when he refused to give up his Christianity.

Yes, also Shakespeare’s birthday and the date that he died too!

My DD’s school used to give each child a fun sized Mars Bar
On St.George’s Day.

Happy St George’s day. It’s also Prince Louis 1st birthday. I’m no particular fan of the Royals but to see a picture of a happy smiling child in the news made a lovely change after all the horrible events over Easter.

Strictly speaking, Jura is correct. Saints days in the church calendar are not marked during Easter week, therefore St George's Day is April 29th this year.

I love GN you keep finding out new things! Thanks SueDonim. There's a quiz question in there somewhere!

My calendar (next to me) tells me that today, 23rd April, is St George's Day.
Like Easter, it must be a moveable feast, then.

St George was born in what is now Turkey
George was condemned to death when he refused to give up his Christianity.
He also protested against Rome's persecution of the Christians and was beheaded by the Romans.

Nope, it’s not a moveable feast, it’s always on April 23rd and has been for as long as I can remember.

Always thought it should be a bank holiday, shall we start a protest?

That may be true ( church calendar) but few people pay any attention to it, when DD 2 was born St George’s day fell in Easter week ( doesn’t happen often) but DD1 still got a Mars Bar at school on the 23rd.
My village is flying the flag today.

If it's a saint's day it's a church celebration so surely they should decide
Since Easter often falls close to Saint George's Day, the church celebration of the feast may be moved from 23 April: For 2011, 2014 and 2019 the Lutheran, Anglican and Catholic calendars celebrated Saint George's Day on the first available weekday after the Octave of Easter (see Easter Week) (2 May 2011, 28 April 2014 and 29 or 30 April, respectively).[4][5][6] Similarly, the Eastern Orthodox celebration of the feast moves accordingly to the first Monday after Easter or, as it is sometimes called, to the Monday of Bright Week. The church celebration may also be moved if the 23 April falls on a Sunday; in England and Wales the Catholic calendar celebrated Saint George on Monday 24 April 2017 (because Sunday is the celebration of Christ's Resurrection, which is far more important than any saint's commemoration)

British by birth , English by the grace of god !

I always feel we should celebrate it more .