Anyone in Berkshire? Exciting Bin Thread! 🗑

You may or may not be aware that I have started several threads related to rubbish collection.

I know that I’m not alone in my entirely healthy interest in all things refuse.

I have just heard that if you are in Berkshire, that instead of wheelie bins ; you are in receipt of sectioned and weighted bags.

They have a flap, and look a bit like a large handbag. They are totally weather proof (allegedly).

How do you get on with them?

Does anyone else have an exotic and unusual rubbish and recycling set-up?

Where I live you can have bags instead of ugly great plastic wheelie bins, though the council is quite reluctant to issue them. It would take me many months to fill each sort of wheelie bin and they would half-fill my back garden so I have green and blue bags and my household rubbish goes out in a black plastic bag.

Oh my goodness, I would hate bags. We have a black bin for general waste, brown for garden, purple for paper and card and green for other recyclables.

Bin bags would be useless here, the seagulls would shred them in seconds.

DS1 lives in Berkshire and I have noticed bins outside his house, although I was shocked to find that they can't put bottles in them and have to take those to bottle banks. A bit behind the times!

DD is in West Berkshire. They have large green wheelie bins for garden waste and large black wheelie bins for general waste. They use open topped crates for cardboard/paper. Yes, they do use a large ‘ handbag’ looking green thing for cans and plastic bottles. Hadn’t realised they were weighted.
Tell you what though, phone them up for a bulky waste collection and the wait is days. Phone our council to arrange a bulky waste collection and the wait is a couple of months.
I will be very interested to read your thesis on waste collection when finished.

I live in West Berkshire and we have a black wheelie bin for refuse, a green wheelie bin for garden and food waste, 2 green plastic crates for paper/cardboard and glass.

In addition we have a large green bag with a flap over the top for plastic and cans, roughly the size of an IKEA bag.

Absolutely no idea why it’s a bag and not another crate .

In Ocupied North Berkshire, occupied since the radical reorganisation of LA boundaries in 1974 that handed us over, hostage to Oxfordshire.

We have green bins that accept every kind of recycling. Not only that, the council has given us one of those little card wheels where you dial whatever you want to recycle and a little hole in the card reveals whe the item should be put or taken to. We then have a black bin for general waste and a small one for food waste. Brown bins for garden waste are available at a price.

As you would imagine such a simple scheme means our council has one of the highest recyling rates in the country.

In Oxfordshire we have a black wheelie bin for general rubbish, green wheelie bin for all recyclables, (it’s rammed by the time they come to collect) about the only thing we can’t recycle is single use plastic and anything that isn’t clean, we have brown garden wheelie bins that we pay for, until yesterday the collection was suspended, the excuse was Covid, then they jumped on the lack of HGV drivers bandwagon, we are now to get a monthly collection instead of fortnightly, with a suspension of 3 months payments.
I think if you live in coastal districts the seagulls would be a problem with bin bags.

Fanny we are in Berkshire and have the exact green bags you describe and they are excellent and very easy to carry. I wish I knew how to upload a photo of one. They are not bin bags as such and no way could animals or birds get into them. They are totally waterproof and closed with strong Velcro. We have two which is perfect for our household of five. They do not blow away when empty. And we get them emptied every week.

In Lancashire I have three bins ,Grey household ,Yellow, glass plastic and cans,Red paper and cardboard .All emptied fortnightly. I share them with my neighbour whose bins contain wood .He has the garden refuse one for which he pays and I use.He puts them all out and replaces them when emptied. Works fine and suits me .Bins emptied fortnightly.

Isle of Thanet here, and we're down to one bin.
It's black & lidless.
Yup, someone nicked the lid, before we moved in.
But, since moving in, someone nicked our recycle bin, so we have one, lidless bin!!
Just as well there's just 2 of us here. But the rest of the neighbours have 2. Blue lidded and green lidded.
Well actually, come to think of it, next door use a slab of wood for one lid and when I was out recently I noticed a lid was missing from next door but one, also!
Hmmm, we have a bin lid thief!! 😆😆
Anyway, so our binmen, unlike those in the rest of IoT, just grab our bins and empty them regardless.
I like our binmen because they've even taken stuff from beside our bin!

Oopsadaisy, I'm in coastal Cornwall, where seagulls reign supreme. We have large black seagull-proof bags, complete with ties so you can secure them to railings so the varmints can't drag the bag away. You collect them from the local library, of all places, and pop your plastic bin bags inside.

Lincolnshire calling.
Green bin for general waste, black bin with purple lid for dry paper and cardboard, blue bin for other recycling. Green bins emptied every 2 weeks, the others every 4 weeks in the weeks between green bin emptying.

We are the UK champs in Wales at recycling, in fact we’re third best in the world! Where I live we have a big black bin (bags if you live in difficult to access houses) for general waste, a blue bin for paper and cardboard, a red bin for metal and plastics, a green bin for glass, and a food bin, all collected weekly except the black bin (every 3 weeks). Garden waste is also collected if you pay. Your black bin is checked by the council to make sure there aren’t any recyclables. My local recycling plant also takes virtually everything to recycle in separate bins, it takes ages to separate everything, and the men watch the ‘non recyclable’ bin like hawks - I’ve only ever managed to get polystyrene and old duvets in there.

Bin bags would be useless here, the seagulls would shred them in seconds.

Hi Blossoming no, they aren’t like normal bags at all, I think I was being misleading using that word.
They are completely indestructible, as Greenfinch says.
The people who have got them speak very highly of them. They take up much less space than wheelie bins apparently.
I’ll try to find a photo…

Casdon third in the world! Wow!
When we were on our hols near Pembroke, I noticed how hot on recycling they were.
I do wonder what happens to our recycling. We’ve had so many different systems.
Now paper, cardboard, tins and glass all goes into one bin, and I’m not sure how it can be sorted properly.

alizarin that’s good news, on our last visit to the coast in Suffolk the seagulls were going crazy over a bin bag they had split open all over the road, let’s hope they soon get them there too.

Ali08 you mentioned your bin lid was stolen. I would have thought the same a while back if I hadn’t witnessed my bin being emptied into the truck. It was returned to the roadside minus the lid.

Presumably it must have caught in the mechanism. I phoned the council and it obviously wasn’t the first time they’d had such a call. No quibble and they replaced the bin free of charge. It might be worthwhile phoning about it.

Highlands here. Black bin for general rubbish, green for recycling - except glass. Collected fortnightly. Glass you take to local recycling points, most embarrassing when you don’t do it for 6 months 🤭

If you live in the city you can pay for a garden rubbish bin, out in the country you are expected to have a compost heap - snake lives in mine.

We now have a blue weighted bag for all our plastic, its collected every week with other recycling, but our wheelie bin is now every three weeks. 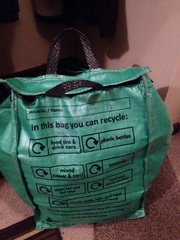 Green bag ready to go out tomorrow.First attempt at uploading a picture.Hope it works!