I’ve been chatting to a couple of posters about boat life; one who already lives on a boat, and other whose husband would like to.

I’d love to live on a boat; but I’m fully aware that I’ve got a very idealised, romantic view of things…
Also, it would be pretty impossible for me in reality at the moment.

But in the meantime, I’d love to hear your experiences
Thank you! x

I lived on a boat for 20 years. 1979-1999.
Experiences, far too many to mention.
We did spend one year sailing through the French canals and rivers to the Mediterranean ( Marseilles. And then of course, home again.

On a canal boat at this very moment! Lovely relaxing yet interesting holiday. When the weather’s good, can’t beat it. Relentless rain, though, everything becomes grim very quickly.
Try a weekend and see!

Thanks Meryl and Kate
Yes, I’d love to do a barge holiday. As soon as my mobility is better, I’ll definitely give it some thought.
We live very near Mercia Marina in Derbyshire

I lived on a boat for 20 years. 1979-1999.
Experiences, far too many to mention.
We did spend one year sailing through the French canals and rivers to the Mediterranean ( Marseilles. And then of course, home again.

Oh and I were also living afloat during those same years.
It wasn't until our sons were in their mid-teens, and getting past their long legs in a 6ft wide boat became an obstacle course, that we finally called it a day.

I don't know about you, but I felt for many years after that I had left behind a huge part of my identity, having lived that way of life from the age of 18!

But would I go back now? I'm not sure, because things have changed a lot, and I think I would always be hankering after the way it used to be, when it wasn't so mainstream.

We did a canal boat holiday in France starting at Mayenne. So peaceful, so convenient when you arrived near a town. No worrying about parking.
No rushing, lots of people to chat to and all the excitement of navigating each écluse. It seemed such a great idea that we’ve hired/borrowed boats over here since. Holidays are great. You have such a limited luggage with you. I’m not sure I’d like to live on one.

Fanny know Mercia Marina well we often drive out for a day there, we found it when looking at fishing venues on the Trent for DH fishing club. Another one we go to is Barton under Needwood. They are both so calm and relaxing.

Galaxy I knew a couple who did it, completely for financial reasons.
I don’t think that they were prepared for it at all.
Whenever I saw the bloke he looked a complete mess, and panic stricken! He wasn’t the most organised of chaps, and I just think that it didn’t suit him.
Mind you, I don’t think that it helped that they took their enormous , barely housetrained Great Dane with them too.

We lived by the river Ouse for fifteen years so were lucky to have a private mooring at the bottom of the garden. We had a four berth cabin cruiser and spent most weekends messing about on the river. We made a lot of friends with people who kept boats at the local marinas and used them as weekend and holiday retreats. They were happy times.

I would have happily lived on a boat when I was younger but you need to be fit. 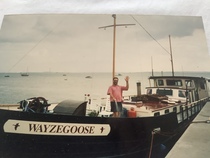 MamaCaz
Never had that problem. We were 16’ ( midship)

Galazy
Too many to mention as you can imagine in 20 years. ?
The annoying ones were the people who wanted to do it, bought the boat, then took up hours of your time asking for advice then ignored it all.

Have you read Narrow Dog to Carcassonne, Fanny? I read it a long time ago and then wanted to live on a narrow boat.

Yes at least I had sense to know it's not my thing.

I loved that book too DiscoGran! It made me want to holiday in Carcassone ... sans boat though.
?

Sorry my daughter is home so I am limited for time. But the ones I looked at were moored, so do the boats actually move or are they just to be lived in? I know that sounds a daft question

Also some have fully functioning bathrooms. Do they hook up to some sort of water mains?

and last stupid question..Merlotgran, you say you were on the Ouse, what happens when the river swells? do you have to vacate the boat?

I suggest hiring a narrowboat for a few days. Potter along a canal somewhere learning how to handle it. Enjoy the journey, it's what it is all about. Don't be afraid of locks, they are part of the experience too but you need a reasonable level of fitness and common sense to operate them.

Find out how to fill up the water tank, look after the toilet, dispose of rubbish, monitor battery and gas use and so on.

Most boaters are friendly and those that live on their boats are usually quite happy to talk about them.

DH and I really look forward to a few weeks a year on our shared narrowboat.

JaneJudge
The boat will rise with the flood so you adjust your mooring lines accordingly.

Here is a blog of a couple of blokes on a narrow boat.
www.youtube.com/watch?v=WKKdpFqM0to

Fanny, yourpost made me laugh, I have had three Great Danes, and as breed they don't care for water. My first dog snapped her lead when I was trying to get her to walk over Teddington lock! Water beneath one is very scary! We had a lovely holiday years ago going down the Garrone and the Canal du Midi, eighteen locks in ten days. Couldn't do all that jumping onto the bank to the up any more. DH used to have a sailing boat, one has to be very tidy!

Our little boat dog hated water. It all started the day when, still quite young and soon after we rescued her, she jumped down onto what she thought was solid earth, but turned out to be water ( beneath trees, with green reflections and nor a ripple to be seen)!
I remember it well, although it's 41 years ago - Greens Forge on the southern Staffs and Worcester canal

We used to have a sailing boat in Greece.We spent every summer, about six months a year sailing round the islands.Not without problems but one of the best times of our life.

Our boating days go back to University and the University sailng club's Easter sailing holiday on the broads - and the less said about that the better!

Since then we have hired motor cruisers on the Thames and on the Broads and when DH's mother died we bought our own river cruiser, which kept us amused holidays and weekends for about 5 years. One year we took it right down to London and moored at St Catherine's dock. it was only after we got (safely) home we realised our insurance was void once we got below Teddington Lock and on to the tidal Thames. heigh ho.

Merylstreep. I remember DH nipping down to the berth to aadjust the mooring lines when there was a lot of rain and the river was high - and also when it got low.

Next Easter we have again hired a boat on the Broads and will be going en famille, both AC plus DDiL and DGC. It is not our first holiday together, so it should be great fun.

I remember OH and I once (1979) spending the best part of a night at Tewkesbury on shore as the river waters rose.
Our boat was in danger of drifting onto the bank if we didn't keep pushing it out, otherwise it might gave got stranded, or even sunk, when the water level began to fall again,

Cruising again once the locks reopened was quite scary too - back then, the weirs were not as well protected as they are nowaday!

That was our first year on the canals, and was quite a steep learning curve.