Am I now officially "old"?

Last night I went out for dinner with my (younger) neighbours when I tripped (I was wearing heels for the first time in months). They immediately lunged towards me to try to catch me and looked very concerned!

In the past I think people would laugh and say something along the lines of that should only happen after I had a drink!

So as the subject heading says - am I now officially "old"

It depends on whether, when discussing this over dinner afterwards, they said 'you fell' or 'you had a fall'.

Well, you do call yourself "OldWoman70"

I started fearing the ‘falls’ years ago when I would ‘trip’ over nothing while out. Then I changed shoes and no more trips!

They say that how people react when you “have a fall” aka trip, fall over, fall, , determines whether you are old or not.
If they rush to help you to your feet and check you are OK, I’m afraid you are old, if still young, they leave to sort yourself out.

I slippped just before Christmas and broke my wrist leaving my art class at a local hotel, it was caused by a combination of slippy heels on wet leaves. The nurse told me gently, "never mind it could have been your hip!" which made me feel rather old and decrepit. However, my friends either asked me if I'd "come off my horse" or if I'd spent too much time at the bar which made me feel much better! You are as old as you feel. I'm 73 but it's just a number!

I realised I was old when my neighbour offered to bring in my shopping at the beginning of lockdown.
I will never forgive her for that. 😄

I always thought that as the Government of the day never lets you have anything until it’s almost too late, the start of your ‘old age Pension’ coming into your hands means that you are old.
Although now that it’s called State Pension I suppose you’re only as old as you feel. Some days that’s very old.
Other days not so much.

I saw an article about Bridgit Macron yesterday. It says she’s almost 70 and they referred to her as being in ‘late mid-life’.

I saw an article about Bridgit Macron yesterday. It says she’s almost 70 and they referred to her as being in ‘late mid-life’.

Bluesky - I started fearing the ‘falls’ years ago when I would ‘trip’ over nothing while out. Then I changed shoes and no more trips!

I was the same after falling down a pothole in the pavement about seven years ago and breaking my wrist.

Just before Christmas I was secretly congratulating myself for having stayed upright for the last few years. A few days later I tripped over nothing and broke my elbow. Serves me right for being so cocky

My mother-in-law said she knew she was getting old when people stood up for her on the tube - but she always declined and so she says didn't accept she was old until she was pleased they did it!
I think she was in her mid/late 80s before she thanked them and took the seat.

I would be concerned if my friends didn't try to stop me falling, old or not. I've been falling over all my life - down the stairs, up the stairs, off kerbs, over a matchstick... once crossing a busy street in London on a zebra crossing, legs and undies exposed for all to see. 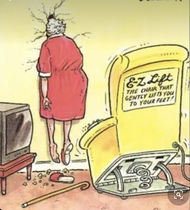 This is old age, well, it made me laugh!

I am dyspraxic. I have been fallinng over, taking tumbles, having a fall for most of my life.

Last week, on holiday, I was filling up the water tank on the boat we were holidaying on, when it reached full and water started spraying over me, I stepped backed quickly and tripped over the sewage emptying pipe on the ground behind me. Nobody helped me. I was up and on my feet before they could reach me.

Had a fall in not dissimilar situation a few months ago. I thought I was standing on the first step of a step stool, when I was on the second, stepped back, the ground wasn't where I thought it was, staggered backwards, was just getting my balance when I staggered into a manhole cover that stood proud awaiting the new patio and rolled back over it.

I describe these constant falls as being a built in bone density check. As long as I fall regulalry and sustain no damage beyond a bruise. I have strong bones.

DS tripped over his feet last week, went spread eagle, graised a larger area of inside arm and broke his elbow in two areas and the humerus. More breaks than I have ever had - and he is 30 years my junior.

I was asking my mum to get a buzzer to wear in case she has an accident as she lives alone.
She gave me her best 'teacher' look and said disdainfully, 'No, those are for old people.'
She was 87 at the time!

I was asking my mum to get a buzzer to wear in case she has an accident as she lives alone.
She gave me her best 'teacher' look and said disdainfully, 'No, those are for old people.'
She was 87 at the time!

Hmm buzzers, I was going to ask a question here about buzzers/smart watches but probably another thread is more suitable.

Just before the first lockdown I tripped over a kerb and broke my shoulder while I was wearing hiking boots.

If people want to think I'm old they can. I don't regard this as a problem for me. Why is being thought young such a cultish thing?

I often trip on or over things I don't like steps or stairs. I felt old the last two trips on the train to Cardiff people offered me their seat. I know they meant well but my white hair must make me look older than I am.

I am delighted when younger people offer me their seat. I don't mind if they think I am old, I accept gratefully. I have only begun to feel old in the last year. My husband is a year younger but seems a lot older. Now there are things that neither of us can manage any more. It is nothing to be ashamed of.
My mum decided she was old when she was 72 but then ten years later she said “what on earth was I thinking? I am still not old yet “

When DM was 82 she used to go out collecting for 'Help the Aged'. It was a while before it dawned on her that she was older than most of the people she was trying to help.

Chloe, aged 5, when asked if she would like a mince pie informed us that ‘only old people eat mince pies!’ When I told her that I had made them she replied that I must be really old!

I’m not really old but I do trip over a lot especially when sober, never when I’ve had a glass or two!

I was grateful and it is nice that people offered their seat but I felt guilty! I was saying oh thanks but I am only sixty five my husband just said sit!

I’d be ready to catch/help anyone, of any age if they tripped nearby, just a steadying hand. Broken bones are not the prerogative of any specific age.

Would you ever go to the cinema/ theatre on your own?