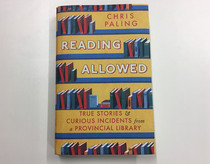 Is it a Brontë masterpiece set on the moors of Yorkshire or a recent debut telling the story of a widow in a quiet Essex village? Well-known or obscure, we want to know!

Tell us the name of your town or city and the name of the book (or books) in which it's featured for a chance to win Chris' book Reading Allowed: True Stories and Curious Incidents from a Provincial Library.

For more on all things local, visit your Gransnet Local site.

My town is Crewe in Cheshire, The book is The Boy I love by Lynda Bellingham, it is a love story centered around the Lyceum Theatre in Crewe.

I live in Gullane in East Lothian, near Aberlady.
The book I'd like to nominate is Nigel Tranter's Footbridge to Enchantment. This is a non fiction account: the personal anecdotes and reminiscences of the author round the shores of Aberlady Bay, where he did his daily walking and writing. Chapters include: "Two Paths to Enchantment", "Flotsam and Jetsam", "Boundless Dune Country", "The Belligerent Swan", "Puzzles of the Tide's Edge", "A Canine Optimist", "In Search of Jovey Gray", "Flights of Freedom", and "Threats of Flooding".
When I was a teenager, he spoke about his work at a meeting of my youth group, and I've been hooked ever since!

Shamed to say my town is Hemel Hempstead and it is featured in Crap Towns. Not my ideal claim to fame!

George Orwell based his book Animal Farm in the village of Wallington, in Hertfordshire,quite near us.
I think he lived there just before the War.
I studied the book at school, and find parts are still relevant, today.

Pendle - Whistle Down The Wind

Poldark's Cornwall by Winston Graham. I am lucky enough to live right in the middle of the Cornish mining area, and near to many of the places that you will read about or see on TV if you have been following the series.

Samuel Pepys Diaries - 5 minutes from where I live is a road named after him.

John Innes conservationist - I walk in the John Innes Conservation Area with our local walking group once a week. Features in books on horticulture:

Hiding From the Light by Barbara Erskine is set in Manningtree and Mistley very near where I live and is about the terrors that The Witchfinder General, Matthew Hopkins brought to the area in Cromwell's time.

"Woollyback" by Alan Fleet is set in Winsford Cheshire .. brings back so many memories of growing up here in the 60's and 70's.

Peter James sets his best-seller Roy Grace detective thrillers around Hove & Brighton, just up the road from me. He even went to interview a witness in the road where my daughter lives

Sandwich - although historical, I can't remember it featuring in any book whatsoever. E. Kent is quite boring to most, thought I love it. I do know however that Henry V massed his fleet on the way to Harfleur for the Agincourt thing, so perhaps it was mentioned in the Shakespeare play!

My town is Stoke on Trent otherwise known as "The Potteries" and I would like to nominate Arnold Bennets 'Anna of the Five Towns'. The five Towns of Stoke on Trent are made up of Tunstall, Burslem, Hanley, Longton and Stoke but Bennet omitted Fenton which is really the 6th Town and is known as the forgotten town, as he thought that Five Towns sounded better than six! He does disguise the names of the towns a little - e.g. Burslem becomes Bursley, but it is a victorian novel set in the early 20th century and evokes many memories for me of my early years. (Although I'm not that old!)

Mine are Hobson's Choice, as it is set in Salford, where I live,, and Light's Over Manchester, where I was born, both brilliant books, my copies are a little worn now, through reading a lot

Can you imagine a time when time had to be bought? From 1836 until 1940 the Belville Family 'sold' the time using an 18th century pocket watch using it to check the time at the Royal Observatory and taking it to City companies and local firms. This true but unbelievable story is set, of course, in Greenwich but also in my hometown of Charlton where Maria and her daughter Ruth Belville lived. It tells of her fight to keep up the business as a woman after the death of her husband and the walk across London to bring the time. I'd thoroughly recommend 'Ruth Belville - The Greenwich Time Lady' by David Rooney.

We live in Cowdenbeath, it has featured in several of the Ian Rankin books. This is because Ian attended Beath High School in Cowdenbeath - in fact he was in my husband's class!

I live in Faversham and I don't think it has been featured in any book. It gets the occasional mention like "I drove down the M2 past Faversham", but that's it!

Mysteries of Glass by Sue Gee - set in Herefordshire. A splendid book and a splendid county!

The Cadfael books by Ellis Peters are set in Shrewsbury later made into a TV series starring Derek Jacobi and by the way I am a librarian so this book would be very interesting for me to compare notes.

I'm near Dartford, Kent - I lived in Dartford for 20+ years and moved just a couple of miles down the road. The book that springs to mind that featured Dartford was 'Miss Carter's War' by Shelia Hancock; it was a good book to read and nice to recognise places. Come to think of it, I won my copy of 'Miss Carter's War' from Mumsnet

Alnwick Northumberland all the Vera books are set in this area

I'm in Kent so would be The Darling Buds of May

Over 65s should do more ironing to be healthy!!!

Why is this happening?

What qualities do you most admire in your friends