If only the UK was so sensible... 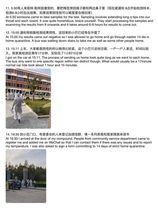 Typed on her phone by an ex student of mine going into Shanghai.

Sensible China....where all this started in the first place.

So sensible, that they have cruel live exotic animal markets.

...and a viral experiments laboratory just down the road!!!

There are some false positive tests coming out of China saying that those who allegedly died from the virus could well have died from something else as seasonal 'flu is still around in many places. The testing which was done wasn't an accurate reading on all in which to place the coronavirus to blame.

Don't forget, we had over 500,000 deaths in this country due to the Beast from the East but there were no lockdowns and no urgent information, everyone just carried on and battled through it. I don't get it at all.

The same in Italy/ Lombardy where the majority are elderly anyway plus being smokers, the same as in China so chances are that many wouldn't have died from the virus alone.

In which Wales, Scotland and Northern Ireland weren't included. The sad statistics were increased by 8% on previous years.

Really? You're going to lower yourself to Trumps level (not all of you, sorry!).

IF the UK put in place the measures that China did (we had LOADS of notice) we would not be facing the tsunami of death that we are about to experience.

So YES! Sensible China. But I guess we're British. We won't get it as bad as them.

I thought "The Beast from the East" was bad snow?

The communist government instead is claiming that it has largely controlled the epidemic, even as it suspiciously now blames “foreign arrivals” for new cases of virus. Leaked video from China shows huge lines at a hospital in Chongqing, for example, raising questions about just what is happening around the country.

What Beijing cares about is clear from its sustained war on global public opinion. Chinese propaganda mouthpieces have launched a broad array of attacks against the facts, attempting to create a new narrative about China’s historic victory over the Wuhan virus. Chinese state media is praising the government’s “effective, responsible governance," but the truth is that Beijing is culpable for the spread of the pathogen around China and the world. Chinese officials knew about the new virus back in December, and did nothing to warn their citizens or impose measures to curb it early on.

Instead of acting with necessary speed and transparency, the party-state looked to its own reputation and legitimacy. It threatened whistleblowers like the late Dr. Li Wenliang, and clamped down on social media to prevent both information about the virus and criticism of the Communist Party and government from spreading.

Possible origins of the virus

Based on their genomic sequencing analysis, Andersen and his collaborators concluded that the most likely origins for SARS-CoV-2 followed one of two possible scenarios.

In one scenario, the virus evolved to its current pathogenic state through natural selection in a non-human host and then jumped to humans. This is how previous coronavirus outbreaks have emerged, with humans contracting the virus after direct exposure to civets (SARS) and camels (MERS). The researchers proposed bats as the most likely reservoir for SARS-CoV-2 as it is very similar to a bat coronavirus. There are no documented cases of direct bat-human transmission, however, suggesting that an intermediate host was likely involved between bats and humans.

In this scenario, both of the distinctive features of SARS-CoV-2's spike protein -- the RBD portion that binds to cells and the cleavage site that opens the virus up -- would have evolved to their current state prior to entering humans. In this case, the current epidemic would probably have emerged rapidly as soon as humans were infected, as the virus would have already evolved the features that make it pathogenic and able to spread between people.

In the other proposed scenario, a non-pathogenic version of the virus jumped from an animal host into humans and then evolved to its current pathogenic state within the human population. For instance, some coronaviruses from pangolins, armadillo-like mammals found in Asia and Africa, have an RBD structure very similar to that of SARS-CoV-2. A coronavirus from a pangolin could possibly have been transmitted to a human, either directly or through an intermediary host such as civets or ferrets.

Incidentally, pangolins are the most widely-trafficked animals in the world..... by the Chinese

China have caused this bloody mess. Nothing sensible about it.

The rest of the world should hold them to account for lack of food hygiene.

This is much worse than BSE and the world banning UK beef.

If China really was sensible it would have listened to the late Dr Li. Instead, it tried to silence and punish him and hush up this calamity which has now been unleashed onto the world.

Gagajo seems to be enthralled by anything that China does; despite its poor human rights record, its cruelty to animals, its appalling failure to do anything about its escalating air pollution and it's convenient habit of silencing anyone who dares to threaten the reputation of the government.

I have GOOD friends there. Their schools are opening as of April 20th.

I'm not responding to blatantly racist comments. To be quite honest, I don't care. What I do know is that they have a lower death rate than Italy for goodness sake. Their emergency hospitals have closed and they are back to taking routine appointments in the main hospital. In Wuhan. I get this NOT from a government source but from my friend, who has her whole family in that city.

Her brother, sister in law and mother had CV. They have recovered after having great medical treatment.

SueDonim, yes, they were ignorant in the beginning. But the UK has sat by and watched 1st China, then Italy and now Spain and Germany suffer and have STILL only just gone into containment, and even then, not totally. There are still many people out and about in groups. There are teenagers happy, out and socialising because they have early summer holiday. Why don't we have the police and the army out controlling the lockdown?

I appreciate that China has many faults. There is another side to it that none of you know because you only read the MSM and get nothing but propaganda. However, that isn't the point of this thread. The point is, that China is in control of the contagion. They have overcome it and are aggressively preventing it from recurring.

IF ONLY we could learn from it and act accordingly.

Many of us will disappear from this site over the next few months, because we will have succumbed to CV. I wish to god we had an aggressive approach to overcome it, but I suspect we will ONLY get to that point when our death rate has soared horrifically.

WHY can't we do it BEFORE that occurs?

"Many of us .... will have succumbed to C.V." You think many of us are going to snuff it? The recovery rates don't suggest that.

What should I do with my granny's engagement ring?

Have you been outside yet?