Zoe Ball, the Radio 2 presenter has seen her pay rise by £1m since taking over the breakfast show.
www.bbc.co.uk/news/entertainment-arts-54119758

Do you actually mean BY a million? So what is her annual salary ?

Cant stand her on the radio so anything she is paid is too much. I never watch Take 2.

Presenters' pay and the Over 75s are two separate issues.

It's a welfare payment and should be back in the hands of the government - so crafty of them to offload the responsibility and so escape the flak.

Can't stand Zoe Ball. So gushy and irritating. That fee excludes her pay from Strictly! Too. Much. Money.

Another here who’s not impressed. I find her very irritating, and she’s one of those celebs who can’t go ten minutes without a cutesy anecdote about her child (I do wonder how Woody feels about this). Of course we all have different tastes, but one of my favourites is Liza Tarbuck, who’s warm, witty and not afraid to play an eclectic range of music, and is apparently worth about a tenth of Zoe Ball’s salary.

Though to be fair, LT’s still not on a bad hourly rate for a weekly show!

The BBC should be subscription only not a tax on every household in the UK then its upto you if you want to subscribe and pay. Its obscene the amount of money the so called talent (I use that word lightly) get. Defund the BBC.

I don't understand why any of these middle aged presenters are paid the amount they are. There must be thousands of young people who would do a better job for mch less Sack them, audition new talent and appoint the best person for a reasonable wage. If the old presenters want to take a pay cut that's fine.

I must admit it left me speechless for all of 45 seconds when I heard just how much this woman earns for presenting a radio show.

Presenters' pay and the Over 75s are two separate issues.

Yes. But presenters' pay needs to be addressed as a matter of urgency because this is our money which is being wasted.

I agree, trisher
(This is becoming a habit!)

If they defect to other channels, so what?
There must be many talented people out there waiting for a chance.

Other channels are proving that they can do things so much better than the BBC.
The licence fee is becoming legalised robbery because to watch any other channel you have to have a BBC licence.

How can anyone deserve that much money for presenting? The world has gone mad!

I’m with others that suggest new faces should be given opportunities. Way back presenters were recruited from pirate radio stations once the BBC decided to include young people’s music in their offerings. I’m sure there must be many presenters who would do a fine job for less than 25% of that amount of money.

They are all paid far too much! I really can’t think that my life would be any different without Zoe Ball!
If the BBC paid peanuts there would still be people queuing up to present programmes, just for the experience, celebratory status.
The BBC had status when it was the only broadcasting option. Time it was revamped.

I think it’s obscene.
Previously Ms Ball earned c£350k, which is already a ludicrously generous amount of money, now she’s earning c£1,350,000. I can’t make sense of it ...
Surely she wouldn’t be that great a loss, if she was poached by another channel.

I realise serious concerns were raised by women BBC employees, regarding their gender pay gap. However to slap £1 million on one woman’s salary is just absurd.
Equally Gary Lineker earning £1.75 million is beyond my comprehension.

I value the BBC and it’s wonderful contribution to our national lives. However, if they want the Tory Government to dismantle them, this disgraceful pay structure (especially in a time of pandemic) means they are heading in the right direction.

Obscene headlines when people are losing their jobs !!

Is this as a result of their now having to pay women equal salaries to men?

Helps towards Zoe’s I suppose. 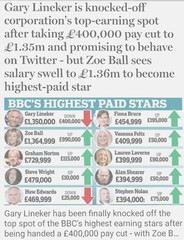 The so called BBC talent wage bill paid for by us.

Is this as a result of their now having to pay women equal salaries to men?

No, I don't think so.
She is the highest paid person at the BBC.
I just ask why ?
Is she that talented?

(Not in my opinion!)

Perhaps we should all rebel and refuse to pay the fee.

They can't send us all to prison.

What a crazy insensitive time to give someone a million pound pay rise in the current climate. The BBC must have a death wish!

Radio 1 has a much better track record for bringing in new people, giving rising talent, unknowns and interns guest slots, etc. They probably think the Radio 2 listeners are set in their ways and wouldn’t want this. Surely this would be a good time to put this to the test?

Firecracker thank you for the info ... but it’s making me feel slightly nauseous...

Imagine us agreeing!!!
I was thinking about the glory days of the BBC when they nurtured real talent and created great work. They now seem intent on keeping inadequate people and paying them huge amounts

Is your road having a street party?

Why is Johnson more popular than Starmer?